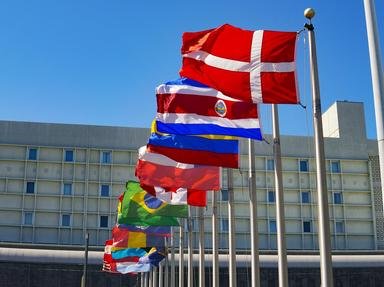 Order the country by the number of stars on its flag. Lowest to highest. 1 to 27. Clues provided.


The State of Israel, approximately the size of New Jersey, is situated in western Asia. It declared independence in 1948. Israel borders Lebanon, Syria, Egypt, Jordan and Palestine. It has a coastline on both the Mediterranean and Red Seas. Israel is home to the Dead Sea, the lowest point of land in the world. It is claimed that Israel has more museums per capita than any other country, one of which is Yad Vashem - the World Holocaust Remembrance Centre.

The flag of Israel has a white background, with a blue hexagram, or six-pointed star, in its centre, and a blue line at the top and bottom. The star is made of two intersecting equilateral triangles - just their lines, not filled in. This star is known as the Star of David, and is an historically recognised symbol of the Jewish people.
2. Panama


A transcontinental country, the Republic of Panama is situated in the south of North America, and the north of South America. It borders Costa Rica to the north and Colombia (the country of which it used to be a part until 1903) to the south. The Panama Canal between the Pacific Ocean and the part of the Atlantic Ocean known as the Caribbean Sea is important for world trade. Panama is unique in that you can see the sun rise on the Pacific and set on the Atlantic. The famous Panama hat actually originated in Ecuador.

The flag of Panama is divided into quarters. Top left is a blue five-pointed star on a white background, top right is red, bottom left is blue, and bottom right is a red five-pointed star on white. The red and white quarters represent the two main parties, Liberal and Conservative, respectively. The white background to the stars represents peace. The red star represents authority of law, and the blue star represents purity and honesty governing civic life.
3. Burundi


Situated in the Great Rift Valley of east Africa, the Republic of Burundi is a landlocked country that borders Rwanda, the Democratic Republic of the Congo, and Tanzania. One of the smallest African countries, it is slightly smaller than the U.S. state of Maryland. Burundi has two capital cities - Gitega is the political capital, and Bujumbura is the economic capital. The world's second oldest freshwater lake, which also has the second biggest volume of water, Lake Tanganyika, is on Burundi's south-western border.

Burundi's flag has a white saltire, a cross that goes between the diagonally opposite corners. The top and bottom sections are red, and the left and right sections are green. In the centre is a white circle containing three red six-pointed stars. The white represents peace; green, the nation's hopes; and red, its suffering in the fight for independence. The stars represent the three main ethnic groups of the country, the Tutsi, Twa, and Hutu.
4. New Zealand


New Zealand is an island nation in the Pacific Ocean, about 1,200 miles to the east of Australia. It has two main islands, North Island and South Island, and around 700 others. Its capital city, Wellington, and largest city, Auckland, are both on North Island. New Zealand is the country with the ninth longest coastline. Its highest point, Aoraki, in the Southern Alps, is over 12,000 feet tall.

The New Zealand flag has a dark blue background, with the red, white and blue United Kingdom flag in the top left corner. There are four red stars, with white outlines, to the right, set out with relative sizes and positions in the pattern of the Southern Cross asterism's four main stars. All the stars are five-pointed. Several countries feature a representation of the Southern Cross, but most show more than four stars.
5. China


The People's Republic of China is a large, highly populated country in east Asia. The country of China has a very long history, being ruled for centuries by emperors, and became a republic in 1919, and then a Communist state in 1949. China has borders with fourteen countries, tied with Russia as the most of any state. China is a very varied land, with the cold Gobi Desert and the Himalayas in the north and biodiverse and ecologically important subtropical forests in the south. Its Yellow and Yangtze rivers are two of the longest in the world.

The flag of China is red, with one large yellow star in the top left corner, with and four smaller yellow stars in an arc nearby to its right. All are five-pointed stars. The red stands for the Chinese Communist Revolution, and the stars represent the unity of the people.
6. Australia


The Commonwealth of Australia consists of the main land area of the continent of Australia, plus Tasmania and some smaller islands. Australia is the flattest and oldest of the continents. It was first inhabited between 65,000 and 50,000 years ago. At around 7,300 feet, Mount Kosciuszko is Australia's tallest mainland mountain, but it is smaller than Mawson Peak on Heard Island, which is 9,000 feet, and Mount McClintock and Mount Menzies on the Australian Antarctic Territory, which are both over 11,000 feet tall. Australia's largest state, Western Australia, is 50% bigger than Alaska.

The flag of Australia is dark blue, and has the Union Flag of the UK in the top left corner, with a large white seven-pointed star, the Commonwealth Star, under it. On the right are five white stars representing, by position and size, the Southern Cross. These are seven-pointed, except for the smaller star, representing the fifth brightest of the Southern Cross stars, Epsilon Crucis, which is five-pointed.
7. Venezuela


The Bolivarian Republic of Venezuela is situated in the north of South America, plus a large number of small islands in the Caribbean. It borders Brazil, Guyana and Colombia. Venezuela is a biologically megadiverse country, with varied habitat such the Andes, tropical rainforests and the Caribbean coast. Its Médanos de Coro National Park is situated in the country's main desert area. Venezuela's economy is dominated by the oil industry.


Tuvalu is an island nation, consisting of three reef islands and six atolls, about midway between Australia and Hawaii in the Pacific Ocean. It is the fourth smallest country in the world, and very flat, with its highest point only 15 feet above sea level. Tuvalu is part of the Western Polynesian tropical moist forests ecoregion. One of Tuvalu's main ways of generating income is through selling the use of its ".tv" internet domain name.

The flag of Tuvalu is light blue, with the Union Flag in the top left corner, and nine yellow five pointed stars on the right, representing its nine islands. They are shown in the correct arrangement, but with north to the left.
9. Uzbekistan


Situated in Central Asia, the Republic of Uzbekistan is doubly landlocked, which means it is surrounded by countries that are, themselves, landlocked. These are Kazakhstan, Tajikistan, Kyrgyzstan, Turkmenistan, and Afghanistan. Uzbekistan is a hot, dry country. Its highest point, Khazret Sultan, is 15,200 feet high. The Aral Sea, to the north, formerly the fourth largest lake in the world, has largely disappeared due to over extraction of water. Uzbekistan is a major producer of cotton and carrots.

The flag of Uzbekistan has three bands: blue represents the sky, water and the Turkic people; white is the Uzbek symbol for peace and luck; and green represents nature, new life and harvest. Between these bands are smaller red bands representing the power of life. To the top left, in the blue band, is a crescent moon, representing the new nation, and also a traditional symbol of the Uzbek religion, Islam. Next to the moon are twelve five-pointed stars arranged like this:

which visually approximates to Allah in Arabic script.
10. Brazil


The Federative Republic of Brazil is the fifth largest country in the world, situated in South America, and bordering every country or territory in that continent except for Chile and Ecuador. It has several islands, including the Rocas Atoll, the only atoll in the South Atlantic, a World Heritage Site, and wildlife sanctuary. Brazil is the largest coffee-producing country in the world.

The flag of Brazil has a green background, with a yellow rhombus in its centre. Within the rhombus is a dark blue disc. This disc is populated by 27 white five-pointed stars - presented in nine constellations. Across the blue disc is a white band with "ORDEM E PROGRESSO" in green.

The green background represents the House of Braganza of Pedro I, the first Brazilian emperor. The yellow is for the House of Hapsburg, to which his wife, Maria Leopoldina of Austria, belonged. The stars represent the 26 Brazilian states, plus the Federal District. "Ordem e Progresso" means "Order and Progress", and is the national motto.
Source: Author Upstart3