The wide, cold landscapes of Alaska are home to a large number of beautiful and noble animals. Join me on an expedition to see some of them up close!

Quiz Answer Key and Fun Facts
1. Weighing in at up to 700 kilograms (1,500 lbs) for a male, this ruminant has a different name in American and British usage. For this question, I don't want the name, however, but rather the antlers - which of these is correct?


Answer: Only males have antlers and shed them every year

This bull moose (or elk, in British usage) has been photographed in late spring. His antlers have just begun to regrow and will, over the summer, become several times as large, developing the typical shovel shape. The cow moose normally has no antlers although in rare cases, a hormonal imbalance can cause the female to grow a rudimentary pair.
2. Eight animals of this species are said to pull Santa Claus's sleigh. In nature, they are not quite as fast as in this folklore and can't fly, but they are still capable of a quite significant speed - what is their approximate top sprinting speed?

Reindeer are quite accomplished sprinters, easily able to outrun a predator such as a wolf or bear. Even a young calf on its second day of life can match the pace of an olympic sprinter and adults are even faster. Reindeer also have great endurance, easily covering a marathon distance (42 km / 26 mi) per day while migrating.
3. The animal shown here is the North American variant of a rodent that also has species in South America, the Mediterranean, South Asia and Africa. Which is the main aspect in which the North American variant differs from its Old World (European / African) cousin?


Answer: The North American variant lives in trees, the African one on the ground

Unlike the ground-dwelling, burrowing Old World porcupines, American porcupines are accomplished climbers and live in trees. Their quills, made of keratin-plated hair, look very similar when viewed from afar, but the American porcupine's quills grow singly, while the Old World porcupine's grow in clusters. All porcupines are purely herbivores.
4. I suppose everyone knows this little fellow whose habitat is not restricted to Alaska but stretches across the entire North American continent, including the cities. Which of the following is its closest relative?

The raccoon family, procyonidae, belongs to the superfamily of musteloidea, which includes weasels, otters and badgers. Like cats and dogs, most musteloidea are carnivores, although the raccoon itself is omnivorous, typically deriving about one third of its nutrition from plants and two thirds from animals.

In the German language, the raccoon is called "Waschbär" which literally translates to "washing bear". This name - similarly existing in many other languages as well - alludes to the bear-like body shape of the raccoon and its habit to wash its food before eating it.

The English name of raccoon is a loanword from Algonquin with a similar origin.
5. You'll probably immediately recognize the markings on the right-hand animal in this picture - the left one is a rare cream-colored individual of the same species. If you don't know yet, their, erm, scent will lead you onto the right track. What kind of compound is responsible for the unpleasant aroma these beautiful animals can spray?

The smelly mix sprayed by a skunk gains its odor mainly from three thiols. 2-butene-1-thiol (C4H8S) is the simplest of these, the others are 3-methyl-1-butanethiol (C5H12S) and 2-quinolinemethanethiol (C10H12NS), the latter of which is a diaromatic compound.

The skunk's alternate name, polecat, is somewhat of a misnomer as, like the weasel and raccoon, the skunk is rather related to dogs than to cats.
6. This image shows three canines at play - you certainly know them as the ancestor and wild cousin of domesticated dogs. They travel and hunt in packs, but which is the most common configuration of such a pack?


Answer: One mated pair and their younger offspring

Wolf packs are typically families consisting of an older pair, mated for life, traveling with several years' worth of their offspring. The young wolves stay with their parents anywhere from one to four and a half years before dispersing and finding a mate of their own.

In rare case, two or three families can share a territory and live together for some time. Wolves need a lot of room - the core territory of a pack (usually 5 to 10 animals) is around 35 square kilometers (15 square miles) and large, strong packs can have territories several dozen times larger.
7. The animal in this picture is undoubtedly a feline - and probably not a native Alaskan but a member of the Eurasian subspecies. Which cat is this agile predator most closely related to?

The lynx genus (which includes the bobcat as one of its four species) consists of medium-sized wild cats that are close relatives to the domestic cat. A characteristic detail of all lynx species are the prominent tufts on the ears. The Eurasian lynx is the largest of the four lynx species, slightly larger than the Canada lynx. Both the Canada and Eurasian lynx can show the silvery-brown coat without prominent spots while the Iberian lynx and bobcat all have a clearly spotted fur.
8. This uniquely Alaskan bear is the largest brown bear and rivals the polar bear for the title of largest bear overall. It is named for the archipelago on which these bears live - what's its name?

All four names - Afognak, Chirikof, Kodiak, and Shuyak - are islands or island groups within the Kodiak archipelago. The Kodiak bear can be found on all of them but Chirikof, which, being treeless, does not present a suitable habitat for brown bears. Biologically, the Kodiak bear has been genetically isolated for at least the last ten thousand years, when the retreating ice in the Bering strait isolated it from both the Kamchatka bears (a close relative) and other bears living near the western tip of Alaska. Male Kodiak bears can weigh up to a metric ton, making them the heaviest land-based carnivores on Earth (polar bears are considered marine mammals).
9. There's no mistaking this animal - the shape and color are unique. An adult male will, on average, weigh half a metric ton, but its cubs are tiny at less than a kilogram. How long does it take for the average cub to grow up to the point where it is weaned from its mother?


Answer: Two and a half years

Polar bear cubs are born in the winter, with the mother entering a state similar to hibernation in a specially protected maternity den. After birth, the mother will remain in this state, nursing her young, for usually two to three months, during which the infant animals grow in weight by a factor of 10 to 15.

The cubs are usually weaned and chased away by their mother during their third summer, although in some areas, this can already occur in the second summer.
10. Here's a sea lion - one of five species. Only one of those species can however truly be considered a native of Alaska (along with other locations), which one?

While the pictured California sea lion can be found hunting in Alaskan waters during the warmer months, it is primarily native to the Californian and Mexican coast. The Steller sea lion, also called northern sea lion, however, can primarily be found near the Bering strait, hunting and breeding both in Russian and Alaskan coastal waters.

The Japanese sea lion was last sighted in the 1970s and is considered extinct.
Source: Author WesleyCrusher 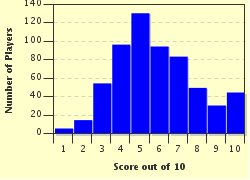