Arizona's habitats from desert to pine forests are home to many amazing species. How much do you know about the native wildlife of Arizona?

Quiz Answer Key and Fun Facts
1. Arizona's San Pedro River is one of the most famous riparian areas in the world. Amongst the 400 species that call it home is the second smallest species of owl in the world. What is this owl's name?

Native to Mexico and the American Southwest, elf owls are 5 to 12 inches tall and have a wingspan of 15 to 16 inches.
2. This solitary predator is the second heaviest cat in the Western hemisphere. Ranging in color from tawny to silvery-grey, its scientific name is Puma concolor. What other name is it more commonly known by?

The mountain lion holds the Guinness record for the animal with the highest number of names. It boasts over 40 names in English alone.
3. The collared peccary (Pecari tajacu) is an animal native to Arizona that bears a superficial resemblance to a pig. What's name is more commonly used to refer to this animal?

You can tell pigs and peccaries apart by the shape of their canine tooth, or tusk. European pigs have long tusks which curve around on themselves, while peccaries have short, straight tusks.
4. As the fastest land mammal in North America, this Arizona native can maintain speeds of 40 mph for several miles, reaching 60 mph in shorter bursts. Which Arizona animal am I describing?

Scientists speculate that the pronghorn antelope's running ability evolved in response to predation from the extinct American cheetah. Its speed greatly exceeds that of existing North American predators.
5. Found across most of western and southern Arizona, it has bead-like scales arranged in a pattern of black bands or reticulations on a peach, orange, yellow, or pink background. What venomous lizard am I describing?

The gila monster is a protected species in Arizona. Its bites are painful, but rarely fatal to humans.
6. The high pitched yips and howls of this animal are most often heard at dusk or nighttime. In fact, its scientific name Canis latrans, means "barking dog." What animal am I describing?

Coyotes will sometimes mate with domestic dogs resulting in hybrids called coydogs. The coydog's predatory instincts and lack of fear toward humans make them more of a serious threat to livestock than pure blooded coyotes.
7. Most will remember this remarkable Arizona bird as the nemesis of Wile E. Coyote in a popular "Looney Tunes" television cartoon. Can you name this speedy bird?

Roadrunners can attain speeds up to 17 miles per hour, making them quick enough to catch and eat rattlesnakes.
8. Can you name the largest rattlesnake in the Western United States? It is responsible for more bites and deaths to humans than any other rattlesnake species.

Despite their fearsome appearance, tarantula venom is non-toxic to humans (although rarely a bite will cause a serious allergic reaction). However, the tarantula's abdomen is covered with barbed hairs which are used as a defense against predators. After the tarantula kicks these hairs at an attacker, they can become embedded in skin or eyes causing great irritation.
10. These rodents are often called pack rats because they obsessively collect materials to use in the construction of their nests. What is the official name of this species?

Pack rats build complex nests called "middens." Their nests are often built in small caves, but can also be found in the attics and walls of houses.
Source: Author kwdesigner 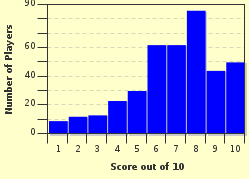 
Other Destinations
Explore Other Quizzes by kwdesigner