Test your knowledge of the mammals in the diverse habitat of the Southern USA.

Quiz Answer Key and Fun Facts
1. Named "little man in armour" by Spanish explorers when they first encountered it. This mammal has expanded its range significantly in the past few decades.

The nine-banded armadillo is native to the United States and has poor eye sight. You may be able to observe them foraging for grubs and worms using their keen sense of smell.
2. This large mammal has made a comeback in the mountains of some eastern states. Kentucky has some excellent habitat with the meadows and forest of reclaimed coal mining areas. You can see them readily in parts of the Great Smokey Mountains National Park.

The native Eastern elk species is most likely extinct. Rocky Mountain elk from the western United States and Canada have been introduced in several southern states including Arkansas, Kentucky, North Carolina Tennessee and Virginia.
3. I see evidence of this animal all the time when I paddle down the creeks and rivers of the south. It will slap its tail hard on the water as it dives to warn neighbors nearby.

Trade in beaver pelts increased the exploration of the back country of the early United States and Canada. Today they appear to be making a good return to the wild where they play an important role in the lives of many species.
4. This aquatic mammal is common in the inter coastal waterways but can be seen miles off the coast too. You might see them from the beach swimming and jumping, often in groups.

Dolphins along the South Carolina and Georgia coast have been observed herding fish towards the shore then temporarily beaching themselves to catch their prey.
5. This is another aquatic mammal that can be found in the southern United States. It is very docile and can be found primarily in the warmer waters of Florida.

Manatees may migrate as far north as Massachusetts in the summer. They have a herbivorous diet and consume 10-15% of their body weight in a day.
6. This squirrel species is nearly completely black, or has a black head, in some parts of their southern United States range.

Fox squirrels are the largest tree squirrel in North America. They are not as common in urban areas as grey squirrels, preferring widely spaced forests and the forest edge instead.
7. This mammal is an invasive species to the United States. I have seen them while fishing in Texas.

Also known as the coypu, they were raised on fur farms but many have escaped and can cause significant damage to native plants and animals.
8. This is North and South America's native pig. It is found in the arid regions of the southern United States.

The javelina or collared peccary is the species found in the United States. They are very common in southern Texas and southern Arizona.
9. This wild canid is critically endangered. It once roamed from Texas to Pennsylvania. The last remaining wild population was captured in East Texas and Louisiana to form a breeding program. Today they have been reintroduced in the wild but their numbers are still very low.

The largest population of non-captive red wolves is located on and near the Alligator River National Wildlife Refuge in eastern North Carolina. One of the biggest threats to these animals is interbreeding with coyotes.
10. This mammal is extremely rare in the United States and was only been observed in the early 21st century on a few occasions in Arizona and New Mexico.

Jaguars are very rare but will cross the border from Mexico for a limited time. In 2013, one young male was observed for months in the Santa Rita Mountains of Arizona, and is the only known permanent jaguar in the United States!
Source: Author Montyd 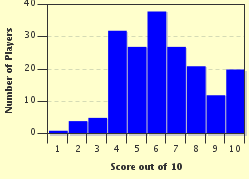 
Other Destinations
Explore Other Quizzes by Montyd