Welcome to the "Rabbit-tat" Trivia Quiz

During a severe windstorm, large branches fell from trees in our back yard. We placed them along the back fence until spring for later disposal - but now it has become a very popular place for bunnies and other wildlife. Welcome to our "Rabbit-tat."

Share on Facebook
Share on Twitter
Share by E-Mail
Author
Jinxgirl
Time
5 mins
Type
Multiple Choice
Quiz #
375,360
Updated
Dec 03 21
# Qns
10
Difficulty
Average
Avg Score
7 / 10
Plays
267
This quiz has 2 formats: you can play it as a or as shown below.
Scroll down to the bottom for the answer key.

Quiz Answer Key and Fun Facts
1. The "Rabbit-tat" in our back yard has attracted a certain mammal. Which of the following is most likely to be found in our Lincoln, Nebraska suburban yard?

The eastern cottontail rabbit is one of our most frequent visitors. They are very cute bunnies with little white bottoms!

A jackrabbit is actually not a rabbit, but rather a hare. Larger than rabbits with taller hind legs and larger ears, they are primarily found in the arid southwest and western plains of America.

A hyrax is a furry, cute animal ranging from one to one-half feet long and weighing around 4 to 10 lbs. (for the chubby ones.) It is actually not a rodent, but is a mammal more closely associated with the elephant. (I know... isn't nature wonderful!)

The whistling hare is a cute, furry mammal formally known as a pika. With short ears, no tail and a small body, it gives a high-pitched "danger call" before diving into its burrow for safety. They are known as coneys in North America.

***Fun fact - the jackrabbit was named for its ears - similar to a jackass. It was long known as the "jackass rabbit." Mark Twain made reference to it in his western adventure "Roughing It".***
2. Frequent visitors to our backyard are very vocal feathered friends who proudly sport a mostly blue coat with a white chest and underpants (oops, that would be underparts) and a nifty blue crest. What is the name of these guests?

The Blue Bird Vision is a patented style of school bus. Since 2015, the upgrades to the standard model include "clear-lens headlamps with integrated turn signals, LED clearance lights and a height-adjustable driver seatbelt." (In case you are interested, see Blue Bird Corporation's website for many further mechanical details. Woo-hoo!)

"The Blue Boy" is a famous painting by Thomas Gainsborough circa 1770. It is thought to be a portrait of the son of a rich hardware merchant. It now resides in the Huntington Library in California. (No birds allowed.)

I made up the blue grackle answer - but they would be welcome in our yard!

***Fun fact - the blue jay's color is due to the structure of light interacting with pigments in the feathers. Therefore, if a blue feather is crushed, the blue disappears due to structural colouration. So sad. (See Cornell University's page on blue jays)***
3. Late one night, the Sheltie brigade (Summer and Jade) alerted us to a possible intruder in our backyard. As I glanced out the window, I noticed a low, fast-moving creature with over 50 teeth and a prehensile tail rushing across the fence line (I have very good night vision and can count rapidly.) What would this visitor be called?

This guest was an opossum. It does indeed have 50 teeth (more than any other North American land mammal) and a hairless tail used for grasping and climbing. Although it does not hang upside-down by its tail, a opossum does have opposable thumbs on its feet.

Prairie dogs are named for their habitat (prairies - duh!) and their vocalization when danger occurs (barks). Although cute as a button, they don't live in our suburban neighborhood.

Cabybaras are the largest rodents in the world. Typically found in South America, I doubt that this was what the guard pups saw that night. (Evidently in the wild, cabybaras are the preferred prey of the anaconda. Nice to know - I now know to stay far, far away from both of them!)

Naked mole-rats are amazing. They are native to East Africa, live primarily underground, can move as fast backward as forward, have a huge resistance to cancer and a very long lifespan. Scientists are extremely interested in this little friend. Sadly, they do not visit our garden.

***Fun fact - The opossum is very underrated - some call it "nature's little sanitation engineer" because it seems to eat everything! Please visit "The Opossum Society of the United States" website just for fun***
4. Chubby and Hubby decided to do a bit of landscaping in their Lincoln, Nebraska front yard. After planting some bushes and many flower bulbs, they added garden mulch. One day, Chubby notices some small movement under the mulch. EEK! What could cause this disruption?

A vole is a small rodent that resembles a mouse. Known for their burrowing skills and appetite for bulbs, gardeners should watch their tulip plantings! They are very cute, but can be frustrating in their dining options.

A graboid is a fictional sand-worm that appears in the "Tremor" movie and TV series.

A ground squirrel is also known as a chipmunk. It doesn't forage underground.

In the "Star Trek" stories, a shelak is a large Vulcan animal with 6-inch fangs. Although some are domesticated, Vulcan children are warned not to be late with their dinners. (As in "Have you fed your pet his dinner and by the way, where is your little brother?")

***Fun fact - evidently, a graboid is also a legendary creature called the Mongolian death worm. It can spew acid and kill at a distance with electrical discharge. Please refer to Professer Roy Chapman Andrew's 1926 volume "On the Trail of Ancient Man" for further details of this creature. (I have no clue!)***
5. Chubby was absolutely floored! She looked out her kitchen window and saw a wonderful winged friend darting around her flower garden in Nebraska, USA. What was this new addition to the Rabbit-tat?

The ruby-throated hummingbird is indeed the one Chubby saw - it is the only hummingbird species seen west of the Missouri river. The western meadowlark is the official state bird of Nebraska.

The yellow-breasted praire songbird is my invention.

Rocky the flying squirrel is "besties" with Bullwinkle the moose in a cartoon. If you understand this reference, then you are at least as old as I am!
6. "Tap..tap-tap...tap-tap-tap" similar to Morse code came the noise from the "Rabbit-tat." Then, "thump-thump-thump" (like a drum roll) - next was "BAM-BAM-BAM" (like hammering a nail.) Which is NOT a species of the woodpecker native to Nebraska that decided to wake Chubby and Hubby up early in the morning?

Among the 22 species of woodpeckers in the United States, seven live in Nebraska. Unfortunately, as lovely as the image that its name invokes, the "aqua-throated flyer" is an imaginary winged friend.

The other foils are correct answers. Each seem to gather for the "morning wake-up" chorus outside our bedroom windows. We love our feathered friends but NOT at 5:30 am. (OK - maybe we do) ;-)

**Fun note - Challenge your friends..."Is the yellow-bellied sapsucker a fictional or actual creature?"**
7. I am an infrequent visitor to the neighborhood "Rabbit-tat." However, as I can fly low to the ground, I sometimes land and enjoy the bird corn. My vocalizations include "clucks, purrs, yelps, whines and gobbles." Who am I?

I am an American wild turkey. Chubby and Hubby were enchanted to view me as an infrequent native visitor in their suburban back garden.

The ocellated turkey is a valid option, but the other foils are false. (Some might remember the Kentucky "Wild Turkey" bourbon - but that is not what this question is about.)

***Fun fact The ocellated turkey is a beautifully colored bird found along the Yucatan Pennisula. Please research this lovely bird before your next trip to Cancun!***
8. Chubby looked out her kitchen window toward the "Rabbit-tat" and saw new visitors. It was Mr. and Mrs. Mallard eating the various corn, seeds and grains available. Which interesting fact is NOT correct about these friends?


Answer: They can be seen completely diving for their plant dinner.

Mr. and Mrs. Mallard visited the "Rabbit-tat" before the blessed event - yes indeed, little mallards were on the way!

Mallards are considered to be "dabbling ducks" which means they "tip and graze" but DO NOT completely dive for food.

The other foils are correct. Please visit the Cornell Lab of Ornithology's site for incredibly cool information on Mallards. Quack on, my friends!
9. A cackle of grackles appeared in the "Rabbit-tat." The Chubster was concerned that her song-bird feed would disappear due to their appetite. What should she do?


Answer: Relax - they will soon leave on their migratory path

Chubby's group of black birds is indeed called a cackle. They will soon move on their way.

The guard Shelties are no help since they simply look at the feathered guests, bark once and wander away (evidently thinking "no harm, no foul.")

Peanut butter on bird feeder ledges attract "Super Squirrels" (Watch their gymnastic antics to obtain this treat!)
10. Chubby and Hubby are inclusive in the "Rabbit-tat." They include food for various animal friends found in Nebraska. Which is a guest they might encounter given that is the state bird of their state? (Hint - which answer is the state bird of Nebraska and is not an imaginary creature.)

The western meadowlark is the state bird of Nebraska - a lovely songbird with a distinctive yellow bib that is often seen on fence-posts and other high places.

I admit that I had fun with the other imaginary foils. My favorite was the "one-toed corn snuffer." (Still makes me laugh!)
Source: Author Jinxgirl

This quiz was reviewed by FunTrivia editor guitargoddess before going online.
Any errors found in FunTrivia content are routinely corrected through our feedback system.
Most Recent Scores
Jan 11 2023 : Guest 45: 5/10
Jan 01 2023 : comark2000: 10/10 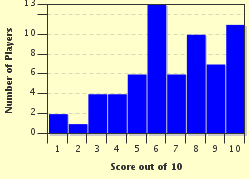 
Other Destinations
Explore Other Quizzes by Jinxgirl