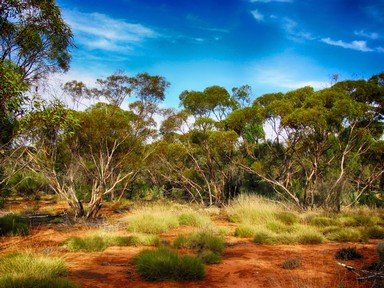 Australia has some of the most beautiful and unique native birds in the world. This should be an easy and informative quiz. All multiple choice - have fun!

Quiz Answer Key and Fun Facts
1. A popular aviary bird, this type of parrot inhabits forests and woodlands on the east coast of Australia. Coloured red, green and blue, what is its name?

The adult male takes about two years to reach mature colouring, the female is not as colourful. They eat seeds, berries, fruit and nuts and lay three to four eggs in spring or summer. Other names include Southern King Parrot and King Lory.
2. There are two types of this large kingfisher in Australia. Its habitat includes northern and eastern Australia and central and southern Western Australia. What is its name?

The Laughing or Blue-Winged Kookaburra is one of Australia's most well known birds. Its distinctive call, like wild laughter, is territorial, telling all other Kookaburras that they have a territory and are ready to defend it!
3. Inhabiting the north eastern coast of Australia, this parrot lives in open forests, woodland, semi-arid shrubland and farmland. What is its name?

This beautiful little wren with a purple crown and blue tail eats insects. It is endangered, found only in the far north of Western Australia, the Northern Territory and the far north western corner of Queensland inhabiting dense shrubbery and undergrowth.
5. One of Australia's many cockatoos, this bird is fairly widespread with several subspecies. Black in colour, this particular one is the second largest of its kind. What is its name?

This cockatoo eats the seeds of native trees including eucalypts and casuarinas. The male of the species has a rounded crest and large bill and is black in colour with red panels on its tail. The female has yellow spots and bars and its tail panels are more orange than red. The Inland and Forest Red-tailed Black Cockatoos differ in habitat and size.
6. This very colourful Australian bird is a popular aviary inhabitant and a clever mimic and is found all along the eastern coast of Australia and across Victoria, into eastern South Australia. What is its name?

Roosting together in their hundreds, the Rainbow Lorikeet is blue, red, orange, yellow, green and violet in colour! It inhabits open and rainforests, woodlands, heaths and home gardens and lays two eggs usually in the hollow of a tree between August and January.
7. A species of cockatoo that inhabits inland, southern and western Australia. Males and females are almost indistinguishable. What is its name?

Corellas are a distinctive group of three different species of white cockatoos with short tails, bare eye rings and short rounded crests. They eat grass seeds, roots and bulbs and inhabit open woodlands, scrub and grasslands. In some areas, they are considered to be in plague proportions.
8. This little parrot is another popular aviary inhabitant. Widespread across the Australian mainland, it has a distinctive crest. What is its name?

In captivity, the Cockatiel or Quarrion comes in many different colourations, but in the wild it is a grey-brown with a lemon coloured face, rosy cheek patches and white on its wings. It prefers arid and semi-arid open country, usually near water and eats the seeds of many native plants.
9. This Owl is known by its call which can be very unnerving! It is fairly widespread covering eastern and northern Australia with large pockets in Western Australia. What is its name?

This medium-sized brown Owl with white spots on its wings, a strongly streaked breast and brilliant yellow eyes 'barks' like a dog! It's call is used to signify its territory and can range between barking like a dog to a wavering human-like scream. It eats small mammals, birds and insects.
10. This little bird with a grey body and brown wings is very common in Australia with a range covering almost the entire Australian mainland. It is also a popular aviary bird. What is its name?

Zebra Finches have orange cheeks, black and white striped throats and tails, black tear drops below their eyes and an orange bill. They eat grass and cereal crop seeds and inhabit open country, preferring drier areas. They breed all year round and lay four to five eggs in a grass chamber like nest.
Source: Author Engadine 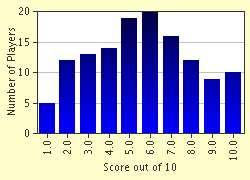