Here are ten amazing facts in a nutshell about the scurrying Sciuridae for you to squirrel away for another day.

Quiz Answer Key and Fun Facts
1. Which of these is the place where a squirrel calls his home?

Squirrels live in all continents apart from Antarctica and it is believed that feral, introduced squirrels have become extinct in Australia. Similar to a bird's nest, a tree squirrel's drey (or dray) is a tree house built from twigs and small branches, with leaves still attached which they cut directly using their sharp teeth.

Their small home is quite high up and around 30cm in diameter. Sometimes they even go for mod cons and build their nest inside a large tree trunk cavity to keep them extra snug and dry. Ground squirrels live in a burrow system and fill it with grass to keep warm.

These underground homes have an additional bonus of giving extra protection against predators.
2. What is a baby squirrel called?

The mating ritual of a squirrel is quite frenzied as the female is only receptive for around 24 hours, usually twice a year, in which time her scent attracts many males who take it in turns to mate. They then leave and have nothing to more to do with mum or babes when they are born. Around 40-45 days later, the pitter-patter of between 2-8 bald little kittens (or kits) are born, deaf, blind, toothless and totally dependent on Mrs Squirrely for two to three months.
3. The tree squirrel, ground squirrel and which other squirrel make up three subgroups of the squirrel family?

There are over 200 species of squirrel and these can be broken down into three subgroups; tree, ground and flying squirrel. Family members include chipmunks, marmots, prairie dogs and groundhogs. The flying squirrel cannot actually fly with wings and feathers as a bird does, but instead it uses a thin membrane, called a patagium, to glide through the air.

They have been known to propel themselves 90 meters in flight. These nocturnal rodents are native to arboreal regions of North America, Africa and Eurasia.

The largest species is the woolly flying squirrel (Eupetaurus cinereus) which lives predominantly in Pakistan.
4. The Malabar Giant Squirrel is the largest in the world but in which country can it be located?

Squirrels come in a variety of shapes, sizes and colour. The smallest squirrel species in the world is the African pygmy squirrel, roughly measuring 110mm to 135mm from the top of its head to the tip of its tail. It weighs approximately 16.5 grams. On the opposite end of the scale is the Malabar Giant Squirrel (Ratufa indica), or Indian Giant Squirrel, with their huge black, rust and tan bodies.

The tail can measure over half a meter in length alone, and their adult body can weigh over 2kg. The shy squirrel prefers to dwell towards the top of the tree canopy where it has most cover against predators.
5. The name 'squirrel' is taken from the Greek word 'skiouros' which means what?

The Greek word "skiouros" is broken down into two parts, "skia" meaning shadow, and "oura" meaning tail. The squirrel's bushy tail is a major identifying feature to these mammals and has several uses, rather than just being a fashion statement to attract a mate. Firstly, the tail can be wrapped over its body to give protection against rain and snow. Secondly, the tail can be used as a fan during hot summer months to keep cool.

Then just as important is the use of its tail for balance on trees and even washing lines as it clambers around the garden. Finally, flicking the tail in succession can be used as a warning system to other squirrels that danger is close by.
6. Squirrelpox is a virus which can kill red squirrels but not grey squirrels.

Squirrel parapoxvirus is a virus that can be transmitted by both red and grey squirrels. Grey squirrels have built up an immune system so they are not generally affected by the disease although they are known as carriers. The disease in red squirrels can rapidly devastate their population. Early symptoms are lethargy, poor coordination and skin lesions. Treatment at this stage has proved successful. If the disease continues, the lesions will spread, the squirrel will become blind and suffer greatly until its death 4-5 days after being infected. Nature at its worst!
7. What name is given to the eating habit of the wild squirrel?

People associate squirrels with just eating nuts and squirrelling away acorn supplies to last them over the winter months. Although this is true, they also eat fungus, seeds, fruits, and to a lesser degree, they dine upon small insects, bird eggs, caterpillars.

They have even been known to devour small snakes on occasion. Because they eat both plant and animal, they are classed as omnivorous.
8. Where can you locate the sweat glands on a squirrel?

Unlike humans, squirrels apply a clever form of thermoregulation by swishing their tail quickly, using the cooler air flow to chill their blood, which is then pumped back around their body. The small amount of moisture they sweat is through glands in their feet.

This aids gripping and also for leaving scent behind, not only to mark their territory, but in case they are chased and need to find their way back home again.
9. One of the rarest squirrels in the world is the tufted ground squirrel from the island of Borneo. What is its claim to fame?


Answer: It has the world's fluffiest tail

Fluffy tails on squirrels make them appear super adorable but they can be tough little critters when then need arises. Take for example the ground squirrel, protecting themselves against snakes, big cats, and other predators by waving their tail back and forward to make them look more imposing.

The very rare and illusive tufted ground squirrel (Rheithrosciurus macrotis) from Borneo has a tail which is approximately 30 percent more voluminous than its body. Following closely in the fluffy tail stakes are the common striped possum and the squirrel glider.
10. Originating in the USA, on which day of the year is National Squirrel Appreciation Day?

For anyone who suffers with seasonal affective disorder (SAD) during the cold, dark winter months, fret no more as our nut gathering, tree scampering, scurrilous little friends have a day worth celebrating. It was devised in 2001 by Christy Hargrove, a wildlife rehabilitator from North Carolina who named the day in the height of winter when many squirrels may be running out of food.

The idea has spread to other northern hemisphere countries, such as the UK. Place some nuts in the garden, or even treat them to a corn on the cob.

They may even reward you with an acrobatic display that would put Cirque du Soleil to shame!
Source: Author Plodd 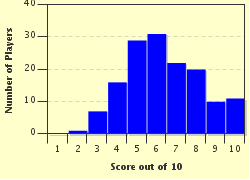