How much do you know about the Siberian Husky?

Quiz Answer Key and Fun Facts
1. What is the name of the people who developed the Siberian Husky?

The Chukchi are a people native to the mid and north-east of Russia.
2. In what year did an all Siberian Husky team win the All Alaska Sweepstakes?

Although Siberian Huskies are not an extremely old breed of dog, they were old enough to win in 1911.
3. Who was the first to win the All Alaska Sweepstakes with an all Siberian team?

He was known as John 'Iron Man' Johnson. Fox Maule Ramey owned the team.
4. In what year was the first Siberian Husky brought to Alaska?

William Goosak was the man who brought them over.
5. Who wrote 'The New Complete Siberian Husky'?

Michael Jennings is considered to be one of the most knowledgable people on Siberian Huskies.
6. According to AKC standard, which of the following coat colours are allowed?

'Siberian Huskies,' as my mom says, 'can have any colour coat and any color eyes.'
7. Above what height can a male dog be disqualified, according to the AKC?

The space is measured at the 'withers' which is the space where the neck joins the shoulder.
8. What word is 'husky' thought to be derived from?

'Esky' is a form of Eskimo.
9. Does a husky howl most closely resemble a wolf or a coyote howl?

We have coyotes in our backyard and our dogs try to talk to them - but it's like they're speaking another language!
10. How many legs are there total in a six dog racing team at the starting gate?

There are 4 legs on each of the six dogs (24) and 2 legs for the driver.
Source: Author ladymacb29 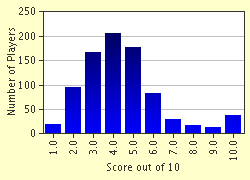 
Other Destinations
Explore Other Quizzes by ladymacb29