A Few Facts about the Beautiful Samoyed Quiz

Samoyed? What's that? The white sled dog. Oh, that one! Here's a quiz about one of the most beautiful, family-oriented dogs around.

Quiz Answer Key and Fun Facts
1. What group of dog does the Samoyed belong to, according to the American Kennel Club?

The Samoyed is in the "Working Group" as classified by the American Kennel Club. Working group dogs are associated with (and often bred for) jobs such as water rescue, guard roles, herding, and pulling sleds. In general, dogs in the Working Group are "quick to learn,...intelligent, capable...and make solid companions." While some working dogs are not appropriate pets for families, the Samoyed is an excellent family companion.
2. The Samoyed dog was originally bred by the Samoyedic peoples of Siberia. Which of the following was not one of the purposes they bred Samoyeds for?


Answer: As a show dog

The Samoyedic peoples are from northern Siberia, and are primarily linked linguistically rather than ethnically. The region of Samoyedic peoples is located east and north of the Ural Mountains, and as you can imagine has a very cold climate. One of the staple economic aspects of the peoples is reindeer herding, and their existence is nomadic. Thus the herding and sled-pulling traits of the Samoyed dog are clearly an advantage. Sams (Samoyed dogs) are fluffy, double-coated dogs, so their value in providing warmth is obvious.
3. The Samoyed is obviously bred for cold weather. What is it about the Samoyed that enables it to withstand low temperatures?

The Samoyed has two distinct layers of fur to its coat. The outer, or topcoat, is coarse, white or biscuit but with a slight silver color, and weather resistant. The top layer keeps the undercoat somewhat clean, which helps with insulation and warmth. But the real weather-beater is the Sam's undercoat, which consists of very dense and soft fur. It is primarily this thick coat that keeps the dog warm. There is also a noticeable ruff around the head, which also aids in keeping the dog warm, and a Sam's tail can be curled over its nose when sleeping for additional warmth.
4. Which of the following best describes a Samoyed's disposition?

As is typical of many working dog breeds, the Samoyed is intelligent, willing, and eager to please. It is a gentle dog, very suited to families with children. It is a loving, friendly dog, but not given to aggressive displays of friendship. Since it is friendly and not an aggressive dog, it does not make a good guard dog.
5. The Samoyed is considered a hypoallergenic dog.

Saying a dog is hypoallergenic is always a relative term of course, and to some people it is an artificial and controversial concept. However, much experience with the Samoyed has led many people to argue that the Samoyed is a good pet for individuals and families with allergies because the Sam either produces less dander than many breeds or its double coat keeps much of the dander from circulating in the air. This might account for many groups considering the breed to be "hypoallergenic."
6. Samoyeds have been given a nickname because they almost always have a certain facial expression that makes them appear happy. What is this nickname?

If you've seen a Samoyed, you know why they have that nickname. The upturned mouth and black markings at the mouth, with all that white (or biscuit in some cases) fur, definitely looks like a smile. The American Kennel Club even has it in its breed standard for the Samoyed: "...the mouth should be slightly curved up at the corners to form the 'Samoyed smile.'"
7. A Samoyed named Etah was the lead dog of a sled team used by Roald Amundsen on the first expedition to reach the South Pole.

By the time they returned from the trek, only 11 dogs were alive. Samoyeds were frequently used on polar and other expeditions. For example, the over-land portion of Fridtjof Nansen's failed but ultimately storied 1895 attempt to reach the North Pole had lead dogs Suggen (a female) and Kaifas (a male), both Samoyeds.
8. Which of the following is part of the American Kennel Club's breed standard for the position of a Samoyed's tail?


Answer: Carried forward over the back when the dog is alert

A Samoyed's tail is one of its distinctive features. We may think of it as curled but in fact it is only loosely curled even though, as the standard states, it "should be profusely covered with long hair and carried forward over the back or side when alert." The tail is often dropped or laid flat on the ground when a Sam is relaxed. A "double hook" (double curl) is against breed standard.
9. Samoyeds need regular exercise. Which of the following is NOT usually a result of lack of exercise?

It's just a simple fact that Samoyeds are social animals that need to be given attention and also exercised regularly. Daily exercise is best. It would be extremely unusual for a Sam to become aggressively violent even when denied exercise, but the other traits are common when exercise is absent. Barking is perhaps the first sign of boredom. Samoyeds tend to bark anyway, so it doesn't take much boredom to increase that tendency. And anyone who has owned a Sam can attest to their skills as escape artists from enclosures!
10. Based on DNA analysis, what do Samoyeds, Siberian Huskies, Alaskan Malamutes, and 11 other specific breeds have in common?


Answer: The most ancient dog breeds

It should be noted that not all of the hundreds of dog breeds have been tested, but the 85 breeds presumed to be oldest had been tested by 2009. The Samoyed was of course among the breeds designated as most ancient, based on analysis of DNA. Essentially what was being tested for was the least genetic variation from wolves. Because dogs are believed to be descended from the wolf (specifically the Gray Wolf), the smaller the genetic differences from the wolf, then the more ancient and "pure" the breed. The Samoyeds have been known and bred for at least 3000 years.
Source: Author ArlingtonVA 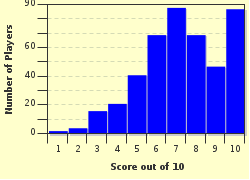 
Other Destinations
Explore Other Quizzes by ArlingtonVA