Quiz Answer Key and Fun Facts
1. According to the American Kennel Club, can the Schipperke be shown in the conformation ring in any color but black?

While other colors can be registered, they are disqualified from competeing in the conformation ring. According to the American Kennel Club (AKC), a few white hairs, or graying due to age 7 and above cannot be penalized. A Schipperke with a rusty cast to the black coat is penalized, though.

The Schipperke can be come in colors such as fawn and tan with registries other than the AKC.
2. There are many breeds that do not have a tail, due to docking or being born without a tail. Is the Schipperke one of those breeds?

They are tail-less, but they don't have tails due to them being docked as puppies.
3. What country does the Schipperke originate from?

The Schipperke generally gets along with other dogs. It can be aggressive towards dogs of the same sex, however. The Schipperke does have a high "prey drive", so cats and other small furry animals should not be kept in the same house as a Schipperke.
7. Some dogs take to strangers readily. Would the Schipperke greet a stranger like a long-lost friend?

The Schipperke is suspicious of strangers, and will bark and/or bite if a stranger comes into his territory. However, early socialization can take care of part of that problem.
8. Some dogs "blow coat" twice a year. Some shed year-round. What does the Schipperke do?

A fairly easy keeper, the Schipperke only requires brushing once a week to maintain the luscious coat. It sheds twice a year, known as "blowing" their coat. During this time, combing and using a slicker brush may help to remove any loose hair.
9. What group in the AKC does the Schipperke belong to?

The Schipperke belongs in the Non-sporting group because they are not bred to herd, nor to hunt, nor are they a hound. The Schipperke is a small dog, ranging from 11-13 inches in males, and 10-12 inches for bitches. It's their small size that makes them ideal for the Belgian barges that some call home. They are also good in apartments, because of their small stature.
10. Which of these health problems can the Schipperke have?


Answer: Both of them

Hip dysplasia can be tested for at the vet's office. One of the tests used to find out if the animal has hip dysplasia is a radiograph. It's a type of x-ray that's used to find out the grade of the hip joint. Some of the grades are "excellent," "good," "fair" and "borderline." The radiograph is taken at a veterinarian's office, and then sent to the Orthopedic Foundation for Animals for review of the grade of the hip joint. The test, commonly referred to as the dog being "OFA'd" is done after the dog is two years of age. Hypothyroidism can also be tested at the vet's office.

All of the info came from the following sources: 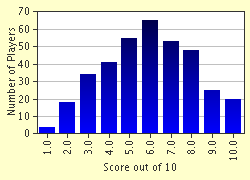 
Other Destinations
Explore Other Quizzes by Morrigan