A brief easy quiz on a very lovable and sweet breed.

Share on Facebook
Share on Twitter
Share by E-Mail
Author
AnneandJay
Time
3 mins
Type
Multiple Choice
Quiz #
72,492
Updated
Dec 03 21
# Qns
5
Difficulty
Tough
Avg Score
3 / 5
Plays
2853
This quiz has 2 formats: you can play it as a or as shown below.
Scroll down to the bottom for the answer key.

Quiz Answer Key and Fun Facts
1. Which of the following is not a type of mastiff?

4. Which movie features a Bullmastiff?

'Turner And Hooch' featured a French Mastiff, 'K-9' had a German Shepherd, and 'Mr. Magoo' had an English Bulldog.
5. What is the typical life expectancy, in years, of a Bullmastiff?

The typical life span is 8-10 as they are a large breed and large breeds don't live as long. Of course some may live shorter then 8-10, and some live longer, depending on their health.
Source: Author AnneandJay

This quiz was reviewed by FunTrivia editor crisw before going online.
Any errors found in FunTrivia content are routinely corrected through our feedback system.
Most Recent Scores
Jan 15 2023 : Guest 166: 4/5
Jan 09 2023 : colbymanram: 1/5 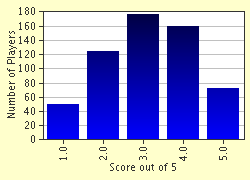 
Other Destinations
Explore Other Quizzes by AnneandJay