Quiz Answer Key and Fun Facts
1. What is the most distinguishing feature of a dog in the Spitz group?


Answer: An overall wolf-like appearance with the tail curled over its back.

A spitz is quite wolf-like in appearance with the exception of its curly tail. In fact, the spitz type is sometimes called "primitive" because it is so similar to the original body form of the domestic dog.
2. Which of the following is a spitz type of dog?

Shiba Inu is a tiny spitz native to Japan. The German Shepherd and Doberman are often seen with pointed ears, but neither are spitz dogs. I simply made up the Tanuki Inu.
3. Typically, which of the following is considered a positive trait of the spitz type?


Answer: Generally they are very odorless and clean dogs.

The spitz are generally clean and odorless dogs. A toy breed is often considered a better choice for a lap dog. Also, while some dogs of the spitz type may dig up gardens and such, most people would not consider that a good trait.
4. No dog of the spitz breed is used for hunting.

The answer is false. For example, my little Shiba Inu was bred for the purpose of hunting wild boar! However, seeing as he doesn't have much opportunity for that, he simply hunts and kills other miscellaneous animals who wander into the backyard... Some other popular spitz type hunting dogs include the Laika/Karelian Bear Dog. Even the tiny Finnish Spitz, usually ranging somewhere between 20-30 lbs. upon maturity, is used for hunting, its greatest asset being its yodel-like bark.

The Finnish Spitz ranges ahead of the hunter until it finds its quarry.

When it does, the Spitz will let out a bark that can travel a long distance, alerting the hunter.
5. What is another word sometimes used to classify breeds of the 'Spitz' group?

As mentioned before, the spitz group is sometimes known as the primitive group because of the close resemblance to wolves. While there is some overlap from the spitz group into other groups, overall the spitz is alternatively classified as primitive.
6. What is the only spitz type dog in the AKC hound group?

The Norwegian Elkhound is the only spitz type dog who is recognized by the AKC as being in the hound group.
7. Which of these dogs was developed from a larger breed and made smaller?

The Alaskan Klee Kai was developed primarily from the Alaskan Husky, although it does retain some Siberian Husky genes. The purpose was to create a small husky-like dog and achieve ideal health and temperament.
8. Which of the following is not only classified as spitz, but is also classified in the toy group?

The Pomeranian is considered a toy dog. The Hokkaido is a medium-sized dog and the Siberian Husky is far from being a toy dog. The Cocker Spaniel is not even a spitz type dog.
9. Which is another name for the Ainu Dog?

The Ainu Dog is a dog of many names, some of which are Hokkaido, Ainu-Ken, Ainu Inu, and Hakkaidoken.
10. Which of these dogs is known for hunting puffins?

Lundehund is Norwegian for 'puffin hound'. Norwegian farmers used Lundehunds to hunt puffins, valued for their meat and feathers. Lundehunds are ideal for hunting puffins due to their great flexibility and six-toed feet which allow them to handle rough terrain and make puffins easily accessible.
11. Which now-extinct spitz type dog was eaten as a sacred Maori dish?

In about 1350 the Maori imported the now-extinct Kuri to New Zealand from the Asiatic mainland. The Kuri was lazy, barkless, and was definitely not used as a companion! The Maori ate it as their sacred dish, known as the sacrificial tabu. The Kuri was bred for the purposes of eating its meat and using its hair for decorating spearheads.

The other three answers (saganaki, spanikopita, and tiropita) are all Greek dishes :)
12. Which of these is typically thought of as a sled-pulling dog?

Of this group, the dog most people would consider a sled-puller is the Siberian Husky.
13. From which country does the Kai Dog originate?

The Kai Dog originates from Japan. Oh, and North America is a continent, not a country.
14. Which dog was the symbol of the Dutch Patriot Party?

The Keeshond was the symbol of the Dutch Patriot Party. However, unfortunately for the Keeshonden (plural of Keeshond), the Patriots were defeated and consequently a number of Keeshonden were destroyed.
15. The Alaskan Husky is not a purebred dog.

The Alaskan Husky is NOT a purebred dog. It is actually a mixture of breeds. Arctic breeds, Coon, Fox Hound, Greyhound, and other breeds comprise the Alaskan Husky. It is often used as a sled dog.
Source: Author GameAngel64 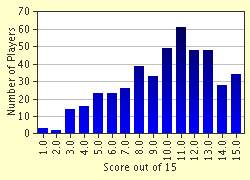 
Other Destinations
Explore Other Quizzes by GameAngel64