Boxers are my favorite breed of dog. How much do you know about them?

Share on Facebook
Share on Twitter
Share by E-Mail
Author
readesmom
Time
3 mins
Type
Multiple Choice
Quiz #
293,429
Updated
Dec 03 21
# Qns
10
Difficulty
Average
Avg Score
7 / 10
Plays
2329
Awards
Top 20% Quiz
This quiz has 2 formats: you can play it as a or as shown below.
Scroll down to the bottom for the answer key.

Quiz Answer Key and Fun Facts
1. Boxers are born with one of three coat colors. The most common are fawn and brindle. What is the third ?

Although some Boxers are very dark brindle, there are no truly black boxers. White boxers are less common and often cannot be registered with some kennel clubs. The AKC will accept a limited registration, offered to pups which are spayed or neutered.

They have a high incidence of being born deaf, and because of these issues, responsible breeders will not breed them. When sold to a new owner, the contract should always state that the pup must be spayed or neutered. However, white boxers do make lovable pets and often can be adopted from reputable breeders or Boxer rescue organizations.
2. How do Boxer owners describe their pets' behavior?


Answer: All are descriptions of Boxer behavior

Boxers are the class clowns of the dog world. They love being with their human family and are overwhelmingly playful from puppyhood into their senior years. If you want a calm, placid dog, the Boxer is not for you. They learn easily, but just as easily get bored and stubbornly refuse to listen when they tire of repetition.

They are known for their unique dance called "kidney beaning" when they spin around first in one direction and then quickly spin the other way. Their ""woo-woo" is their call to play. One thing for sure, you'll never be lonely when you own a Boxer.
3. To what country can we trace the boxer's ancestry?

All Boxers can be traced back to two German mastiff-type dogs, the Bullenbeiszer and the Barenbeiszer. They were later crossed with the Bulldog. Originally, they were used for hunting, pulling carts and bull-baiting.
4. Boxers are frequently used as guard dogs.

Boxers can be excellent watch dogs and will bark at strangers, but they do not make good guard dogs because they are not naturally aggressive or vicious. Because of their imposing look and strong physical appearance, they are often bought by owners to use as guard dogs, but since Boxers cannot be easily trained to attack, many are then abandoned or abused.
5. Most boxers have their tails altered when they are around three days old. What is this process known as?

Actually, boxers are born with long, thin tails. Because the breed is so active, most breeders dock the pups' tails so they don't break or injure them as adults. The procedure is usually done when the pup is 3 or 4 days old. There's nothing cuter than seeing a boxer shake his stump of a tail when he's happy to greet you.
6. The breed standard for boxers is to have cropped ears.

There is no breed standard regarding the cropping of ears, and the practice is outlawed in most countries except the United States. The procedure requires long aftercare to insure that the ears achieve the desired look. In the US, dog show judges prefer the cropped look, but hopefully this cruel practice will be discontinued soon.
7. What is it called when fawn or brindle boxers have white markings?

Flashy boxers can have no more than 1/3 white markings. The white is desirable on the lower front and hind legs, the chest and muzzle and face. If the dog is more than 1/3 white, it is considered white and cannot be registered or bred. Many owners love white boxers and swear that they make the best pets.
8. What characteristics best describe a Boxer?

Boxers are the original high energy dogs, always playing, jumping and racing around. Adult dogs have been known to leap over eight-foot high fences. If you want a calm, serene pet, the Boxer isn't for you. But if you want a clown that keeps you laughing with his antics, there's no better dog than a Boxer.
9. Boxers tolerate extreme temperatures well.

Because of their short snout, Boxers do not do well in hot climates. After a busy workout in the heat, the dog needs a cool down period to recuperate. Because of their short coat, they are also affected by the cold. Boxers should be protected from the elements in the winter with a sweater or coat. White Boxers are susceptible to sunburn, and often need sunscreen for protection.
10. It is a good practice to tie a Boxer outside when you are busy in the house.

Never tie a Boxer up when she is alone. Because they are such high energy dogs, they will do anything they can to get loose, and often will hurt themselves trying. Boxers love and need to be around their human family whenever possible. If it is necessary to confine them, most Boxers will tolerate being kept in their crate if trained as puppies. All they want to do is please their owners, and want to be with them as much as possible.
Source: Author readesmom

This quiz was reviewed by FunTrivia editor crisw before going online.
Any errors found in FunTrivia content are routinely corrected through our feedback system.
Most Recent Scores
Jan 12 2023 : colbymanram: 10/10
Dec 29 2022 : Guest 50: 6/10 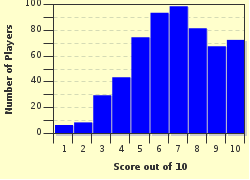 
Other Destinations
Explore Other Quizzes by readesmom