Quiz Answer Key and Fun Facts
1. Where did the Great Pyrenees originate?

It is thought that the Great Pyrenees originated in Central Asia or Siberia and followed the Aryan migration into Europe. The breed takes his name from the formation in southwestern Europe, wherever they're accustomed to guard flocks on the steep slopes.
2. What is the average lifespan for a Great Pyrenees?

The Great Pyrenees' life span is on average 10-12 years. That is about the average lifespan for most large breed dogs. Smaller dogs live for an average between 14-20 years.
3. What is the best climate for a Great Pyrenees?

Great Pyrenees have an extra claw on all four of their paws. The preferred name for the extra claws is dew claw.
5. Which is another name that the Great Pyrenees is also known as?

They are known for being amazing with children. They are gentle with children of all ages, including infants. But be aware with smaller children, they are big - which means a wagging tail and they could bark when your baby is sleeping.
7. Are they suitable to be with other animals?

Usually Great Pyrenees are NOT aggressive, UNLESS they are being abused. They are suitable for animals, particularly cats. They love being with other animals.
8. What is the color(s) of the Great Pyrenees?

All are white or principally white with markings of badger, gray, or varying shades of tan. If they do not match that description, that means they are a mix or they aren't AKC certified.
9. Do Great Pyrenees get sunburned?

Great Pyrenees have very sensitive skin, even if they have a thick fur coat. They sunburn very easily even if they are outside for just five minutes.
10. Great Pyrenees can be guard dogs, but it depends on the way the owner trains them.

Great Pyrenees can be guard dogs, if their owner trains them to be. The main reason people adopt a Great Pyrenees is that they want a guard dog for their family/themselves.
Source: Author kw1653 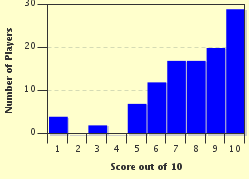 
Other Destinations
Explore Other Quizzes by kw1653