I thought it was about time to have a quiz on this fuzzball of fun.

Quiz Answer Key and Fun Facts
1. What color can an American Eskimo be?

American Eskimo Dogs are covered with long white or cream colored fur. Males have puffy mane-like fur around their necks. The skin underneath is grey or pink.
2. The American Eskimo Dog was originally known as the German Spitz. Why was the name changed?


Answer: During World War I, it was considered "un-American" to have a dog with a German name.


Answer: Rolling in the mud

Many owners state that their Eskies engage in behaviors that are almost cat-like, including licking their paws and catching objects with their front paws. They also tend to show off and make "nests" for themselves.
8. American Eskimo Dogs are generally quiet dogs.

Due to their unusual tear ducts, Eskies often suffer from various problems with their eyes.
10. What is the rescue organization in the United States for American Eskimo Dogs known as?

Heart Bandits fosters, rescues, and places out for adoption dogs that have been found in shelters or can no longer be cared for by their owners.
Source: Author horsebdsu 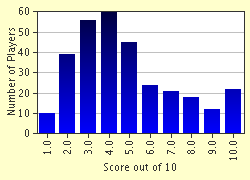 
Other Destinations
Explore Other Quizzes by horsebdsu