A few years before I was born, my mother and father became the first official breeders of the German Munsterlander in the United Kingdom. Here are a few questions about this majestic canine.

Share on Facebook
Share on Twitter
Share by E-Mail
Author
coachpauly
Time
4 mins
Type
Multiple Choice
Quiz #
368,185
Updated
Dec 03 21
# Qns
10
Difficulty
Average
Avg Score
7 / 10
Plays
220
Awards
Top 35% Quiz
This quiz has 2 formats: you can play it as a or as shown below.
Scroll down to the bottom for the answer key.

Quiz Answer Key and Fun Facts
1. From what European country does the German Munsterlander originate?

The large Munsterlander and the small Munsterlander are both from the northwest German region of Munster. As a breed it was officially given recognition in the early 1900s. However, dogs of a similar coloring and build have been identified in German paintings depicting hunting scenes from the middle ages.
2. What primary two colors most commonly define the German Munsterlander?

All of the above are categories of hunting dogs. Gun dogs are bred to assist hunters in retrieving and finding game. There are three primary types of gun dogs: flushing dogs, retrieving dogs, and pointers. The German Munsterlander is a versatile breed and highly competent in all three gun dog functions.
4. The large German munsterlander is similar in weight to which of the following four breeds?

The large German Munsterlander is a fairly light canine weighing in between 50-70 pounds on the average. This animal is an elegant, athletic dog and ranges in height from 24-26 inches at the withers for males and 23-25 inches for females. The akita weighs between 75-120 pounds, the Newfoundland between 100-150 pounds, and the whippet 25-50 pounds.
5. Which of the following descriptions is closest to describing the temperament of the German munsterlander?

English setters do have very similar colorings and markings to the Munsterlander. However, the conformation and head of the two breeds is very different. Many people believe that the Munsterlander breed is descended from the German long-haired pointer.
7. In order to be certified and eligible for breeding in the United States, large munsterlanders must pass the NAVHDA Natural Ability Test. What does NAVHDA stand for?

Due to the relative rarity of the breed, the Large Munsterlander Club of North America (LMCNA) works very hard to maintain the breed's integrity. Consequently, the LMCNA only certifies a dog for breeding if it passes the rigorous testing provided by the North American Versatile Hunting Dog Association (NAVHDA). This testing ensures that the breed is free of hip dysplasia and other abnormalities. Recent scores have shown that large Munsterlanders have a 75% pass rate in NAVHDA ability and utility tests which is on par for passing rates of other sporting dog breeds.
8. On the average, what is the average life expectancy of most large German munsterlanders?

One of the most traumatic events of my childhood was losing Amsel von Heesenhoff. Amsel was my beloved German Munsterlander who passed away when I was just 10-years old at the ripe old age of 12. This computes to about 69-70 years in human time.
9. In England, the large German Munsterlander often competes with other Continental gun dogs in field trials. Which of the following events is NOT included in these working field trials?

The first large German Munsterlanders were brought into Great Britain for breeding by my own mother (Lindsay Wright) back in 1971. At the Crufts dog show in London, England in 1973 on February 9th, fifteen people (including my ma) came together to form the Large Munsterlander Club. This influential group continues to work closely today for the survival and promotion of this magnificent working breed.
Source: Author coachpauly

This quiz was reviewed by FunTrivia editor Tizzabelle before going online.
Any errors found in FunTrivia content are routinely corrected through our feedback system.
Most Recent Scores
Jan 19 2023 : Dagny1: 10/10
Dec 25 2022 : mandy2: 7/10 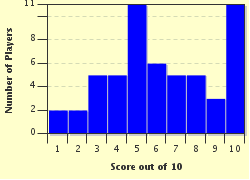