The Best of: Akitas Trivia Quiz

"Tender in heart and strong in strength."

Quiz Answer Key and Fun Facts
1. What was the Akita originally bred for?

The Akita was originally bred to hunt bears in Japan. Today they are used as guardians, or in police work.
2. Hachi-ko was an Akita who is memorialized in bronze at the train station in Tokyo.

Hachi-ko was an Akita who would go with his owner everyday to the train station. He would wait in the same spot until his owner returned. One day his owner didn't come back because he had suffered a stroke and had died. For the rest of his 12 years Hachi-ko continued to go to the train station waiting for his owner. After he died in 1935, Japan had a bronze statue of him built to immortalize his loyalty to his owner.
3. Who brought the first Akita to the U.S?

Helen Keller brought the first Akitas to the U.S in 1937. When she was in Japan she heard the story of Hachi-ko. She was impressed with the story she heard and she said that she would like to have a puppy. She was presented with one and brought it back to the U.S with her.
4. Akitas are known for their uncontrollable aggression.

The Akita is best known for its loyalty. There are not many breeds of dogs that are as loyal as the Akita.
5. Akitas are considered a national treasure in Japan.

The Akita is the national dog of Japan.
6. What color is NOT accepted by AKC standards?

All coat colors are accepted by the AKC.
7. The Akita is a good dog for a first time owner.

The Akita requires an experienced owner. They are very smart and can get into trouble if not handled correctly.
8. In Japan, small statues of Akitas are given to the sick and newborn as a symbol of health, happiness and a long life.

The Akita is very revered in Japan. It is looked at as a symbol for many different things.
9. The AKC standard says that the tail should be...


Answer: A curl held high over the back

The Akita's tail is naturally held over the back, although when relaxed the tail may uncurl. The curl of the tail can come in a few ways: single curl, half curl, and double curl. The most common is the single curl.
10. In the AKC, the Japanese Akita and the American Akita are the same breed of dog. 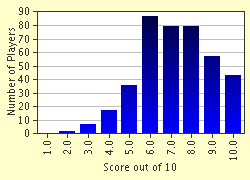 
Other Destinations
Explore Other Quizzes by akita11