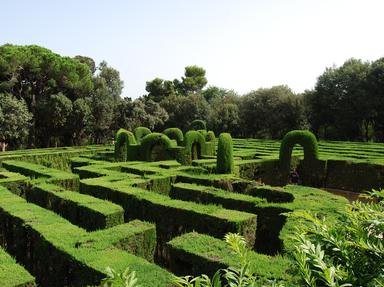 Read aloud each question one time only and then choose the best answer. Remember to read the question ONLY once before answering :) Good luck fellow riddlers...

Quiz Answer Key and Fun Facts
1. How far can a dog run into the woods?

The answer is "half-way" after that he is running "out of the woods."
2. How many animals of each species did Moses take on board the ark with him?

The answer is "0" according to the Book of Genesis it was Noah that built the ark not Moses.
3. If you had only one match and went into a VERY cold and dark room, what would you light first?

Of course you would light the match first otherwise how would you start up the lamp, fire, or stove.
4. A German airliner was flying over the French Alps. On board there were 85 bobsledders from Jamaica. The weather was dreadful and the English captain lost control of the airplane. The engines failed and the little plane hurtled to the ground. Half the wreckage was strewn across the Swiss border and the other half in France. Where did they end up burying the survivors?

The answer is "nowhere." Unless you are a particularly poor rescuer, you do not tend to bury "survivors."
5. How many birthdates does the average "Japanese" woman have?

It is true that according to the World Health Organization, Japanese woman tend to have the highest recorded life expectancy. However, Japanese women, like women in the rest of the world, do only have "ONE" birthdate (the day that they were born).
6. Some months have 30 days, some months have 31 days, but how many months have 28 days?

The answer is 70 ... But how? Well first you divide 30 by ˝ and you get 60, then you add 10 and voila you end up with 70. (Dividing by ˝ is the same as x2.)
8. A doctor gives you five pills for a runny nose and tells you to take one every 2.5 hours. How long will you be taking the pills, or in other words, after how many hours will you take the last tablet?

The answer is 10 hours. You take the first pill right away at zero hours, the second at 2˝ hours, the 3rd at 5 hours, the 4th at 7˝ hours, and finally the 5th at 10 hours.
9. On a windy day Farmer Ben's rooster lays an egg. The wind is blowing fiercely from the east. Which way does the egg roll?

The correct answer is "impossible to say." The rooster (Gallus gallus) is a male chicken and thus quite incapable of laying eggs.
10. What dull color was Napoleon's white horse?

While Napoleon's Arabian horses looked white they were in fact greys. White-looking horses actually have gray skin and the official horse color is "grey" not "white". The only horses that are classified as white horses are albino horses.
Source: Author coachpauly 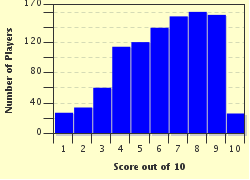 Related Quizzes
This quiz is part of series Be Quiet and Listen all Around Quizzyland:

One quiz from each category is featured. They all have a word dealing with quietness and listening in be title.