In this quiz you find 20 celebrities with androgynous names. Identify each as male or female. There are 20 questions. Good luck and thanks for playing!

Stevie was a famous Texan guitarist and the frontman for 'Double Trouble', who died in a helicopter crash in 1990.
2. Stevie Nicks

Stevie Smith was a troubled English poet. Her work includes, 'A Good Time was Had by All'. She died in 1971 of a brain tumor.
4. Dana Plato

Dana played Kimberly Drummond on 'Different Strokes' in the 1980's, and died of an accidental overdose of painkillers in 1999.
5. Dana Andrews

Dana Wynter was a supporting actress of the 50s-70s. She is best known for the cult classic, 'Invasion of the Body Snatchers'.
7. Jackie Wilson

Jackie Wilson's life reads like a Greek tragedy. He was shot and nearly killed by a spurned lover, overcame drug and alcohol addiction, and died in {1984;} 8 years after a massive heart attack on stage put him in a permanent vegetative state. He had many top 10 hits in the 1950s and 60s, including 'Lonely Teardrops' and 'Higher and Higher'.
8. Jacqueline Bisset

Jacqueline Bissett is a beautiful, British actress of the past 4 decades. Her films include 'Bullitt', 'Casino Royale', and 'The {Deep';} which is credited with starting the Wet Tee-shirt Contest Craze.
9. Jackie Collins

Jackie Mason is a comic actor famous for his one-man show and infamous for a failed sit-com, 'Chicken Soup'.
11. Lee Marvin

Known for his tough-guy roles, Lee Marvin's career spanned many decades. Best known as the leader of the 'Dirty Dozen', he also starred as Liberty Valance in 'The Man who Shot Liberty Valance', and as Kid Shelleen/Tim Strawn in 'Cat Ballou'.
12. Lee Majors

This 'Fall Guy' was the original bionic man in 'The Six Million Dollar Man' and Mr. Farrah Fawcett. He starred in the Nickelodeon film, 'Big, Fat Liar'.
13. The actor Lee Grant

Nominated five times for Oscars, Lee Grant took home the statuette in 1975 for her role in 'Shampoo' and won a directing Academy Award for her documentary for HBO, entitled 'Nobody's Children.'
14. Lee Meriwether

Miss America 1955 got her start in TV on the 'Today Show'. She went on to greater fame playing Catwoman opposite Adam West's 'Batman', and as 'Barnaby Jones' daughter.
15. Pat Riley

He's not just about the Armani suits and slicked-back hair. Pat Riley has been on 6 World Championship basketball teams as a player or coach. He won 4 NBA titles with the Los Angeles Lakers, and is the 2nd All-time winningest coach in NBA history.
16. Pat Carroll

Best known as a comic actress of the 50s and 60's, Pat Carroll can also sing. She was a regular on the 'Red Buttons Show', played a wicked stepsister in Rogers' AND Hammerstein's 'Cinderella', and in recent years has provided the voice of Ursula, the Sea Witch, in the 'Little Mermaid' movies.
17. Pat Benatar

Born in Brooklyn, Pat Benatar is a female rocker of the 1980s. This 4-time Grammy winner was discovered at New York's 'Catch a Rising Star'.
18. Joey Heatherton

Joey can best be described as a 'celebrity'. This sultry blonde made the variety show circuit as a singer, and once starred as 'The Happy Hooker.'
19. Joey Lawrence

Joey got his start as the little kid on 'Give Me a Break' with Nell Carter. He went on to act in a sitcom with his real life brothers.
20. Joey Bishop

A member of the Rat Pack. In the mid 1960s he was heralded as ABC's answer to the 'Tonight Show'. He only lasted 3 seasons, and was then overshadowed by his old side-kick, Regis Philbin.
Source: Author violet4372 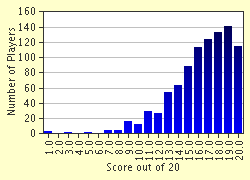 Related Quizzes
1. What's In A Name? Average
2. Celebrity Nicknames Easier
3. AKA - Who Am I? Average
4. Gender Bending Pop Culture Names Average
5. Who's In A name? Part 1 Difficult
6. What's My Name? *3 Average
7. What's in a Name? Average
8. Celebrity Real Names 2 Average
9. Who, When and Where? Average
10. My Old Name, and My New Name! Tough
11. Silent Silver Screen Sobriquets Easier
12. Celebrity Name Game Tough


Other Destinations
Explore Other Quizzes by violet4372