What's in a name? With so many pop culture celebs these days it can be difficult to tell one's gender by first name only. See if you can figure out which of these stars are male and which are female.

Quiz Answer Key and Fun Facts
1. It's in the GENES. The name Gene is a popular name across several genres. Of the famous names listed below, select the Gene that is a female.

Yes, Gene Tierney is the lone female in this group! Kelly is well known for his lead role in "Singin' in the Rain". Siskel is one half of the TV film critic duo Siskel and Ebert. Gene Simmons (born: Chaim Weitz ) is the larger-than-life star of "Gene Simmons Family Jewels" and bassist for the band KISS. Gene Tierney was a beautiful Broadway and film star known for such classics as "Laura" and "Heaven Can Wait".
2. ROCKIN' ROBIN: Beyond the name of a red-breasted bird, there are several well-known people with the name Robin. Which is the only female Robin from the list below?

Robin Wright (Penn) was the wife of actor/director Sean Penn. She is well known as the character Kelly Capwell from the '80s show "Santa Barbara". Wright Penn also had memorable roles in the films "Forrest Gump" and "The Princess Bride". Robin Williams is a comedic actor. Robin Gibb was one third of the musical trio The Bee Gees. Robin Leach is the familiar voice who hosted "Lifestyles of the Rich and Famous".
3. Here's looking at you, KIM! Kim is a popular gender-neutral name that denotes a bunch of famous people. Can you select the famous Kim from the list below who is a male?

The only male Kim on this list is musician and radio personality Kim Mitchell, a solo performer formally of the band Max Webster. Kim Campbell was the first female Prime Minister of Canada. "Betty Davis Eyes" was a well-known tune from songstress Kim Carnes. Actress Kim Novak was the star of the Hitchcock classic "Vertigo".
4. INITIAL impressions: Authors are a celebrated group that often use initials to spell out their names. Can you sort through the letters below and select the one author that is female? (HINT: a reference to his/her famous work is included to help you along.)

Susan Eloise Hinton was the mastermind behind such classics as "The Outsiders" and "Rumble Fish". It has been suggested that Hinton selected the initials "S.E." to disguise her gender when her first book was published. The full names of the other authors listed are: Alan Alexander Milne, Jerome David Salinger and John Ronald Reuel Tolkien.
5. Ode to BILLY: One of the most versatile given names in the English language, Billy is often interchangeable with Will, Willy, Billie and William. Yet, only one of the famous names listed below is male; can you spot him?

Billy Dee Williams' storied movie career includes the iconic role of Lando Calrissian in the "Star Wars" films. Ironically, he is also known in the role as Billie Holiday's husband in the biopic "Lady Sings the Blues". Female tennis superstar Billie Jean King is well known for besting Bobby Riggs in the "The Battle of the Sexes" tennis matches. Billie Burke is celebrated for her role as Glinda the Good Witch (of the North) in the classic flick "The Wizard of Oz".
6. DOUBLE PATTY: Everyone knows someone named Pat. Whether it is a Patrick, Patricia or Patty, the name "Pat" is a popular one for celebrities. Only one couple from the list below features a male AND female named Pat - can you select the correct couple?

Give yourself a "pat" on the back! Singer Pat Benetar rocked the 1980s with such classics as "Hit Me With Your Best Shot" and "Love Is a Battlefield". Esteemed basketball head coach Pat Riley has been the figurehead for winning teams like the L.A. Lakers and New York Knicks among others.
7. ACTOR GRAB BAG: Take a careful look at the performers listed below. All of them are actors with a gender-neutral prénoms. Can you pick the one from the list that could be in the category "best actress"?

Blake Lively is the only actress in this list. She turned in a memorable performance in the 2005 film "The Sisterhood of the Traveling Pants", but is most well known as Serena van der Woodsen in the t.v. series "Gossip Girl". Keach is a storied performer of film, theater and the small screen, notable as the lead character in Mickey Spillane's "Mike Hammer". Affable Tracy Morgan was a cast member of "Saturday Night Live" and the smash hit "30 Rock". Terry Gilliam is an actor, screenwriter and cartoonist known as a member of "Monty Python".
8. ALL "HALE" THE CHIEF: Popular as a surname and a forename, "Hailey" has a lot of variations. The name means "hay meadow". Can you choose the headliner from the list below that is male?

Young actor Haley Joel Osment gave brilliant performances in movies like "The Sixth Sense", "Pay It Forward", and "A.I. Artificial Intelligence". Halle Berry is a gifted American model and actress who starred in such diverse films as "The Flintsones" and "Introducing Dorothy Dandridge". Disney darling Hayley Mills is from an esteemed acting family (daughter of John and Mary Hayley Bell); she is fondly remembered for her dual role in the 1961 flick "The Parent Trap". Gravel-voiced singer Haley Reinhart made it to the top three final in the 10th season of "American Idol".
9. CHRIS CROSS: Chris is a diminutive of names like Christopher, Christian or Christine. It is a perfect unisex name for this quiz. Of the celebs listed below, which is the only female Chris?

Tennis superstar Chris Evert ended her career with 34 Grand Slam singles finals. For part of her career she was known as Chris Evert-Lloyd after her marriage to English tennis player John Lloyd. Filmmaker Chris Columbus was the mastermind behind the "Harry Potter" series on the silver screen. Coldplay frontman Chris Martin is the husband of actress Gwyneth Paltrow. "SNL" actor Chris Farley was a popular performer on the small screen and in movies before his tragic death in 1997.
10. NAME "LEE": Lee is one of those names that makes me ask, 'Is that a man or a woman'? Can you figure it out? There is only one female in the list below, can you identify her correct"lee"?

Lee Remick is a beautiful actress from such memorable films as "Face in the Crowd" (1957) and "Days of Wine and Roses". Lee Trevino is a venerable American professional golfer of Mexican heritage. Lee J. Cobb was cast in both "The Three Faces of Eve" and "Twelve Angry Men" on the silver screen. Lee Majors is a t.v. star, well known as the fabled "Six Million Dollar Man".
Source: Author BRY2K 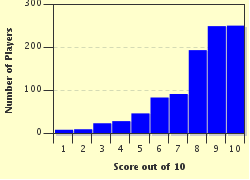 
Other Destinations
Explore Other Quizzes by BRY2K