I give you clues about rock stars who've died. You tell me their name. Some fill-ins, some multiple choice.

Quiz Answer Key and Fun Facts
1. This wild drummer was quite the loon, once blew up his drums on the Smothers Brothers Show in the late '60s. This may have begun the tinnitus (hearing) problems for the guitar player who was standing close by.

Keith was also known as Moon the Loon because of his wild antics. In the Smothers Brothers Show, they tried out an explosive charge in the bass drum during a rehearsal. More than one person secretly thought it should be louder, so the amount of the charge was probably tripled! Pete Townsend's hearing is getting worse everyday. Keith joined The Band in the Sky in 1978 due to a drug overdose.
2. Which of these died in Paris in 1971, the official cause being noted as heart failure.

Jim had moved to Paris after the release of "LA Woman" to write poetry and recoup from his legal hassles and being idolized. He drank heavily, dabbled in heroin, was found dead in his bathtub and was buried in Paris.
3. Born in Scotland, he met up in Australia with a band fronted by 2 brothers who also happen to be Scottish. This electric band powered through several hit albums before the singer, apparently on a highway to hell, died in 1980 after a night of excessive drinking. Who is he?

Bon was the lead singer for AC/DC up until after they recorded "Highway to Hell", a great album that perched them on the brink of international superstardom. Brian Johnson came in to sing on the multi-platinum selling "BACK IN BLACK" album, the title an homage to Bon.
4. This amazing guitar player was originally in Quiet Riot before they hit it big. But he shone brighter than ever when the ex-singer of Black Sabbath brought him aboard the Crazy Train!

Sadly, we lost this guitar master in 1982. He was part of Quiet Riot as one of the top rock acts in L.A. (along with Van Halen at the time). His interest and proficiency with classical guitar playing, coupled with the emotional excitement of hard rock, made him almost untouchable among rock guitarists. Randy joined an unlicensed pilot while they 'buzzed' their tour bus.

The plane's wing clipped the bus, causing them to crash. Randy died instantly. He was only 25.
5. What was the name of the British guitarist who helped Def Leppard gain stardom, only to die amid drugs and alcohol?

A member of Def Leppard for 13 years, "Steaming" Steve Clark died from overdoses due to his relentless depression. Steve was a key creator of many of the band's early hit albums, including the multi-platinum "PYROMANIA". It's sad that a guy can achieve more success than any of us could dream of, and still not be happy.
6. This singer was born Farrokh Bulsara in 1946 on the small spice island of Zanzibar. On November 24th, 1991 he died peacefully at his home in London from bronchial pneumonia, related to the deadly sexually transmitted disease he was stricken with.

Freddie was the dynamic singer for Queen who died of AIDS complications. There are few that don't regard him as one of rock's best singers and showmen ever.
7. Known as 'the quiet one', this guitarist joined The Quarrymen at the age of 16! He was very interested in Eastern Mysticism, as well as the Sitar, which he played on several songs throughout the years.

While with the Beatles (originally The Quarrymen), George's songs often had to take a backseat to the prolific writing of Lennon and McCartney. His talents showed though, when "All Things Must Pass" and the accompanying single "My Sweet Lord" had the distinction of being the first solo recordings by any of the Beatles to top the charts following their breakup.

He died of cancer in 2001.
8. 1994. This guitarist/singer puts a shotgun in his mouth and kills himself. He is survived by his wife and child - Frances Bean.

Though I enjoy other types of music more than grunge, I greatly respect what Kurt created, and what he meant to his generation. I feel most sorry for his now fatherless kid. Layne Staley was a member of Alice in Chains who died, from an overdose of drugs.
9. 1970. Two weeks after Jimi Hendrix' death, this blues/rock singer joins him in eternity after a heroin overdose in an L.A. hotel room. Her album "PEARL" was released posthumously.

What a loss. This woman sang with as much guts as any man before or since. Jim Morrison died within a year after Janis.
10. Between 1956 and 1977, this rock and roll pioneer received three Grammy Awards, three RIAA Platinum Record Awards, thirty-five RIAA Gold Record Awards, and had a total of one hundred and six Top 40 hits. He also appeared in thirty-three films. He died on August 16, 1977.

Can't ignore this guy. Though he died before I was 14, you can't argue his huge influence on rock and roll today. Not just the music, but the attitude, the excitement, and unfortunately, the excesses. Let's hope we don't lose any more of these gifted artists while they are still able to provide us with wonderful and exciting music. Long Live Rock and Roll, and those who create it.
Source: Author saxman4 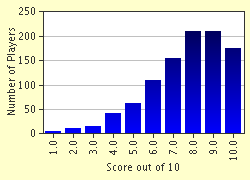