Who Died First in Rock and Roll? Quiz

And the quiz begins... People liked my First in Death quiz so much I decided to do a rock and roll sequel! It's easy, you have to determine which rock star met his maker first.

Share on Facebook
Share on Twitter
Share by E-Mail
Author
bolan
Time
6 mins
Type
Multiple Choice
Quiz #
12,792
Updated
Dec 03 21
# Qns
10
Difficulty
Difficult
Avg Score
5 / 10
Plays
5395
This quiz has 2 formats: you can play it as a or as shown below.
Scroll down to the bottom for the answer key.

Quiz Answer Key and Fun Facts
1. Which of these rock pioneers died first?

Jimi was the first to go. Joplin lasted another two months and Morrison went another year or so. Elvis didn't join the heavenly rock band until 1977 and Bill Haley went up there in 1981.
2. Which one of these 90s musicians went first?

Kurt was, unfortunately, the first of this bunch to go. He committed suicide in April of 1994.
3. Which of these Rock Tragedies occurred first?

The Day the Music Died was the first major rock and roll calamity. The plane they were on hit the ground soon after takeoff, taking away three of the brightest stars of the 50s.
4. Which of these 'teen idol' singers took their good looks to the grave first?

Sal Mineo, a big time teen stage and screen star of the 50s, was murdered in 1976.
5. Drugs ... nasty business that has been the plague of Rock and Roll for years. Which one of these stars overdosed first?

Tim Buckley died of a Heroin overdose caused by sniffing an excessive amount of the drug on a dare. He passed away on 29 June 1975.
6. Suicide is also a plague among artistic types. Which of these artists resorted to it first?

Bobby Fuller, from his self titled quartet, died of mysterious circumstances in 1966. His badly beaten body was found dead of asphyxia caused by forced inhalation of gasoline.
8. The old Dead at 27 club. Which one of its members joined it first?

Brian Jones fell into a swimming pool in 1969, a full year before Hendrix and Joplin entered the club.
9. Airplanes are dangerous to the budding musician. We all know about the day the music died, but which of these other musicians was the first to go down with an aircraft?

Poor Otis Redding never got to see Sittin' on the Dock of the Bay reach number one on the charts. He recorded it a mere three days before his plane plunged into Lake Monona near Madison, WI. Of course he was lucky in a way too ... he never had to hear Michael Bolton decimate it over 20 years later either.
10. Four wheeled death machines, automobiles: which one of these artists was the first to die in an automobile?

Marc Bolan died from injuries sustained in a traffic accident that occured in 1977. He was a passenger in a mini driven by his common law wife Gloria Jones.
Source: Author bolan

This quiz was reviewed by FunTrivia editor gtho4 before going online.
Any errors found in FunTrivia content are routinely corrected through our feedback system.
Most Recent Scores
Dec 21 2022 : Nala2: 5/10
Dec 14 2022 : Guest 68: 4/10 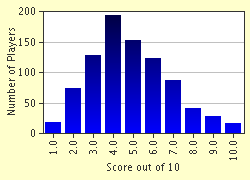 
Other Destinations
Explore Other Quizzes by bolan