Where Have You Gone, Monty Python? Quiz

Pining for Monty Python? Me too...but alas they will never be able to reproduce the magic that helped them create their wonderful television series and films. What have they been up to, post-Python? Try this and find out!

Share on Facebook
Share on Twitter
Share by E-Mail
Author
thejazzkickazz
Time
4 mins
Type
Multiple Choice
Quiz #
105,804
Updated
Dec 03 21
# Qns
10
Difficulty
Average
Avg Score
6 / 10
Plays
3843
Awards
Top 10% Quiz
This quiz has 2 formats: you can play it as a or as shown below.
Scroll down to the bottom for the answer key.

Quiz Answer Key and Fun Facts
1. This question is a downer, because that's the way the Pythons would want it (you know, irony and all!) Which of the Monty Python members was the first to become an 'Ex-Python' (i.e. to die)?

Poor Graham Chapman. After a long struggle with alcoholism, which led to poor health, he succumbed to cancer (and also a stroke). He was the straight man of the group, playing the lead roles in the "Holy Grail" and "Life of Brian". Really a charming fellow, I must say!
2. Terry Gilliam has been the director of several successful films following his career as a member of Monty Python. His directing career included an Academy Award nomination for 'Best Writing, Screenplay Written Directly for the Screen' in 1986 for his work on Brazil. Is he the only member of Monty Python to have received an Academy Award nomination?

John Cleese has also received a 'Best Writing, Original Screenplay' nod from the Academy for his work on the 1989 film "A Fish Called Wanda". Unfortunately, neither won the awards for which they were nominated. The winners were the writers for "Witness" in 1986 and "Rain Man" in 1989...bloody favoritism!
3. Several members of Monty Python have been involved in the creation of documentary series following their work with the group. Which of the members starred in a wonderful travel series called Around the World in 80 Days?

In this series, Palin attempted to retrace the steps of Phileas Fogg, the main character in the Jules Verne book of the same title. The catch was that he had to travel around the world in only 80 days without traveling by air. His adventures were fun to behold, much more natural than those blokes on the "Lonely Planet" travel series!
4. Another charming little mini-documentary series called Ancient Inventions starred a former Python member; but which one was the star of this fascinating set of shows?

In this captivating series Terry Jones explores everything from ancient weaponry to common household utensils. If you haven't had a chance to take a look at the episodes from this documentary series you really ought to check it out, very well done! Let me just add that Terry Jones would have made a better Tootsie than Dustin Hoffman...no man can mimic women quite as well as Mr. Jones!
5. Since the release of "The Meaning of Life" in 1983, which full-length feature film has featured the most members of Monty Python?


Answer: The Wind in the Willows

"The Wind in the Willows" was a 1996 film directed by Terry Jones, and featuring himself, Eric Idle, Michael Palin and John Cleese. Unfortunately, the film was a complete flop at the box office...and from what I have heard it really isn't a very good film. Ah well, occasionally the troop had some bad sketches on the "Flying Circus", so we'll just chalk this one up as a bad feature-length sketch!
6. His only major film release, post-Python, was the critically derided Yellowbeard, though he also starred in several made for TV films and series. To which member am I referring?

"Yellowbeard" also featured ex-Python's Eric Idle and John Cleese, but both starred in quite a number of films after the break-up of Monty Python, unlike Chapman who essentially only did this film. Sadly, the film just didn't cut it with the critics or the film-going public...it was a wash-out.

This is extraordinary when one considers the cast, featuring the three ex-Pythons, Cheech and Chong, Madeline Kahn, Peter Boyle and Marty Feldman, among others.
7. One of the former Pythons was guilty of writing the script for the 1993 film "Splitting Heirs". Who was this unfortunate fellow?

I think it's safe to say that "Splitting Heirs" was not the most successful filmwriting attempt by a former Python member. The film also featured John Cleese, but failed to live up to its tagline, 'A wickedly funny comedy of royal proportions.' It's interesting that Idle failed (my opinion) in this solo writing effort, considering that he was the one Monty Python member who would spend most of his time writing material alone!
8. Which actor or actress did Terry Gilliam direct to an Academy Award?

Mercedes Ruehl won the 'Best Supporting Actress' award for her marvelous performance in Terry Gilliam's "The Fisher King" (my personal favorite of his films). Robin Williams was also nominated for an Oscar in that film (as 'Best Actor') but failed to come away with the award. What a rip-off!
9. Which of the Monty Python members took over in the James Bond films for the Desmond Llewelyn character 'Q'?

Interesting, in "The World is Not Enough" he is introduced as 'R', while in the film "Die Another Day" he is listed as 'Q'. From what I understand, he was originally brought on as Q's assistant 'R', but now has simply taken over as 'Q'. Sadly, Desmond Llewelyn died in a car accident, so he was not able to continue with the Q character, hence why Cleese is now simply...Q.
10. Since the breakup of the group in 1983, this member has become a Buddhist monk, dedicating his life to the benevolent improvement of mankind, and has donated all of his personal material property to a charity focusing on the protection of the wild sneed pigeon of northern Antarctica. Which of our charitable friends has made this sacrifice?

Are you kidding? These guys wouldn't be able to keep a monk's robe on for five minutes! Though they are all intelligent, charitable individuals they are worth a lot more to us in their current capacity, making films and documentaries, than they would be protecting wild sneed pigeons (I made that bird up, by the way, so that would be doubly a waste of time!) Thank you for trying this quiz...and always look on the bright side of life!
Source: Author thejazzkickazz

This quiz was reviewed by FunTrivia editor JuniorTheJaws before going online.
Any errors found in FunTrivia content are routinely corrected through our feedback system.
Most Recent Scores
Jan 25 2023 : Guest 173: 9/10
Dec 08 2022 : Guest 76: 9/10 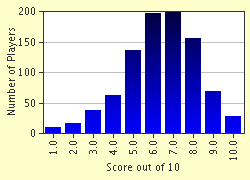