So do you think that you know all about "Harry Potter and The Goblet of Fire" by JK Rowling? Take this quiz and get to know.

Quiz Answer Key and Fun Facts
1. How old was the Bulgarian seeker?

Harry was told this by Ron. He also said that he (Viktor Krum) was the best and the youngest of all seekers in the world. However, they didn't know that he was still a student and were shockingly surprised on his arrival at Hogwarts.
2. What was the full name of the Hermione-made club: S-P-E-W?


Answer: Society for the Promotion of Elfish Welfare

She made this club after she got to know how house elves were treated. Harry and Ron were the first members of this club (after Hermione) even though they found this club idea really crazy.
3. What was the name of the caretaker of the Riddles' house?

He was a muggle and was once accused of the murder of the whole Riddle family. He was very old when he was killed (by Voldemort) and was taking care of the house till then.
4. What was the first name of Beauxbatons' headmistress?

Harry was told this by Hagrid. Olympe Maxime was in fact a half-giant but she claimed that she only had big bones. Hagrid also took her with him to the dragons.
5. What did Neville Longbottom suggest that the second task would be?

He gave this suggestion when Harry opened the Golden Egg in front of everybody in the Gryffindor common room. He thought so because the sound from that egg seemed to be of a person who was being tortured.
6. Who from Gryffindor successfully managed to put his/her name in the Goblet of Fire?

Oliver had left school at that time; a beard appeared on Fred and George's faces when they tried to do so. Angelina Johnson had become 17 a week prior to the placement of the Goblet of Fire in the Entrance Hall. She was an ace quidditch player and was happy that Harry had become a champion, even though she had lost to him.
7. With whom did Seamus Finnigan go to the Yule Ball?

Padma went with Ron, Ginny went with Neville and Pansy went with Draco Malfoy. When Harry went to ask Parvati he asked Lavender whether she would go with Ron but Parvati told him that Lavender was already going with Seamus.
8. Who was Harry surprised to see on the Marauder's Map in Snape's office when he was cracking the clue of the second task in the prefect's bathroom?

Harry saw Barty Crouch Jr, the son of Mr Crouch, who was in the make up of Mad-Eye Moody, trying to steal stuff for Polyjuice Potion. He thought that it was the older Crouch and that is what surprised him.
9. Whom did Harry see casting an unforgivable curse on Cedric Diggory while in the maze during the third task?

Krum cast the Cruciatus Curse on Cedric under the influence of the Imperius Curse. Barty Crouch Jr claimed to have bewitched Krum when he was patrolling on the boundaries of the maze.
10. Whom did Voldemort describe as his "most faithful servant"?

He didn't call him by his name but he said that he was stationed at Hogwarts and put Harry's name in the Goblet of Fire, which gave it away.
11. What is the name of the truth telling potion?

Dumbledore used this potion to question Barty Crouch Jr. Snape got it for him. Snape had also threatened Harry that he might give it to him when he thought that Harry was stealing stuff from his store.
12. What happened to "Voldemort's most faithful servant" in the end?


Answer: The Dementors performed the kiss on him

The dementors did so against the wish of Dumbledore. He was angry because the only reliable evidence that the Dark Lord had returned was now dead.
13. How much was the prize money for winning the tournament?

Harry gave all this money to Fred and George for opening their joke shop. At first he tried to give it to Mrs. Weasley and then to the Diggorys but both of them refused to take it.
14. Which of these was NOT a death eater?

Snape and Karkaroff are both death eaters but did not work for Voldemort. Macnair was present at Voldemort's rebirth ceremony. Ludo Bagman was not a death eater but was once accused of giving away very important information to one of the death eater, which he claimed to be a mistake
15. How many people from the Weasley family worked for the Ministry of Magic?

Arthur and Percy Weasley were the only ones working at the ministry. Fred, Ron, George and Ginny were at Hogwarts. Bill was in Egypt, working for Gringotts and Charlie was in Romania studying dragons. Arthur Weasley used to work in the "Misuse of muggle artifacts department" and Percy worked for Mr. Crouch.
Source: Author sahil2305 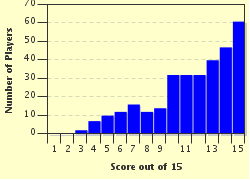 
Other Destinations
Explore Other Quizzes by sahil2305