Counting Up To Sixty Trivia Quiz

Identify the number by the clues. Clues can be descriptive, from pop culture, etc. but they all relate to a common number in some way. A sequel to "Counting Up To Forty", this is numbers 41-60.

There are 52 weeks per year on a Gregorian calendar.
A modern standard piano has 52 white keys plus 36 black keys totaling 88.
The B-52 Stratofortress long-range bomber was developed by Boeing for use in the U.S. Air Force.
Billy Joel released the album "52nd Street" in 1978.
2. Atomic number of silver; popular Russian rifle AK-__; degrees of separation between the Tropics of Cancer and Capricorn; samurai (ronin) in an 18th-century Japanese legend. What number is related to these clues?

The atomic number of silver is 47.
Mikhail Kalashnikov developed the AK-47 assault rifle for the Soviets in the 1940's.
There are approx. 47 degrees of separation between the Tropic of Cancer and the Tropic of Capricorn.
According to the 18th-century Japanese legend, there were 47 samurai (or ronin).
3. Golden wedding anniversary; Adam Sandler's "First Dates" with Drew Barrymore; Curtis James Jackson III; U.S.A., 1959. What number is related to these clues?

Traditionally, the 50th wedding anniversary is called the Golden Anniversary.
Adam Sandler starred in the 2004 film, "50 First Dates", with Drew Barrymore.
Curtis James Jackson III is otherwise known as "50 Cent".
In 1959, Hawaii became the 50th state to join the U.S.
4. New York City's Queensboro bridge; one minute before the top of an hour; MLB's Satchel Paige's age record; U.S. Highway from Texas to Minnesota. What number is related to these clues?

Queensboro Bridge is also known as the 59th Street Bridge and connects Queens and Manhattan over the East River.
One minute before the top of an hour is the 59th minute.
Satchel Paige set the oldest age for a player to play in major league baseball at 59 years-old.
U.S. Highway 59 runs from southern Texas near the Mexican border to the Canadian border in Minnesota.
5. Generations in Jesus' genealogy, according to Matthew; MLB Hall of Famer Jackie Robinson; NASCAR's Juan Pablo Montoya; a key number in "The Hitchhiker's Guide to the Galaxy". What number is related to these clues?

The Gospel of Matthew records 42 generations of Jesus' genealogy.
Hall of Famer Jackie Robinson wore jersey number 42.
Former Formula One driver Juan Pablo Montoya began driving Chip Ganassi's number 42 car in 2006 in the NASCAR series.
The number 42 is a recurring theme in the film, "The Hitchhiker's Guide to the Galaxy".
6. Herbie's number; maximum players normally on an NFL team; miles west of Venus, according to the B-52's; bytes per ATM packet. What number is related to these clues?

The lovable racing Volkswagon Beetle, Herbie, used the number 53 in several films, beginning with "The Love Bug" in 1969.
An NFL team can only have 53 players on roster throughout the season.
"53 Miles West of Venus" is a song by the B-52's appearing on the album, "Wild Planet".
ATM network protocol transmits 53 bytes per packet.
7. Any interior angle of an equilateral triangle; Babe Ruth's HR record count in 1927; three score; CBS news show "Minutes". What number is related to these clues?

Each of the three interior angles in an equilateral triangle is 60 degrees.
Babe Ruth set the record for most home runs in a season in 1927 at 60.
A score equals 20, therefore, three score totals 60.
"60 Minutes" debuted on CBS in 1968.
8. Days between Passover and Shavuot; San Francisco's NFL team; 2004 Joaquin Phoenix film; much of the U.S.-Canadian border. What number is related to these clues?

There are 49 days between the Jewish holidays of Passover and Shavuot.
The San Francisco 49ers football team was established in 1946 and named after the gold prospectors during the gold rush of 1849.
Joaquin Phoenix starred in the 2004 film, "Ladder 49".
The U.S.-Canadian border runs along the 49th parallel north from Minnesota to Washington.
9. U.S. President George H. W. Bush; Montana; Charlton Heston's slave number in "Ben Hur"; Springsteen's "American Skin (__ Shots)". What number is related to these clues?

Rubik's cube is a 6 sided cube containing 9 squares each totaling 54 squares.
Studio 54 was a once popular nightclub in New York City.
"Car 54, Where Are You?" ran on NBC from 1961-1963 starring Fred Gwynne and Joe Ross.
Nero became Roman Emporer in the year 54 A.D. succeeding his uncle Claudius.
11. Wilt Chamberlain's most points in a game rookie record; LVIII; minimum wind speed of a U.S. NWS severe thunderstorm warning; Walter Wager's "Minutes". What number is related to these clues?

Wilt Chamberlain scored 58 points twice in his rookie year in 1960.
LVIII is 58 in Roman numerals.
According to U.S. National Weather Service standards, a storm with wind speeds of 58mph or more is a criterion for issuing a severe thunderstorm warning.
Walter Wager is the author of "58 Minutes", which the movie "Die Hard 2" is based upon.
12. The number 11 on an analog clock; the speed Sammy Hagar "Can't Drive"; the national U.S. speed limit adopted in 1974; gallons per a particular drum, U.S. measure. What number is related to these clues?

The number 11 on an analog clock represents 55 minutes past the hour.
Sammy Hagar's hit "I Can't Drive 55" first appeared on the 1984 album "VOA".
The Nation Maximum Speed Law was enacted in 1974 limiting speeds to 55mph.
A 55-gallon drum is a standard shipping container usually used to transport liquids or powders.
13. NASCAR's Richard Petty; Idaho; Spanish liqueur Licor __; Interstate entirely within Wisconsin. What number is related to these clues?

Richard Petty drove number 43 throughout the majority of his racing career.
Idaho is the 43rd U.S. State.
Licor 43 is a brand of Spanish liqueur named for its 43 different ingredients.
I-43 is an Interstate located entirely within the state of Wisconsin.
14. Sapphire wedding anniversary; 7-inch phonograph record rpm; minutes per half of a football (soccer) match; half of a right angle in degrees. What number is related to these clues?

Traditionally, the 45th wedding anniversary is called the sapphire wedding anniversary.
A 7-inch phonograph record spins at 45 revolutions per minute.
A soccer match has 2 periods of 45 minutes each.
A right angle is 90 degrees, therefore, half of a right angle is 45 degrees.
15. WWII "Mustang" fighter plane; certain area in the Nevada desert; Parker fountain pen; NFL Hall of Famer Dick Butkus. What number is related to these clues?

Heinz claims to produce 57 varieties of food products and lends the namesake to its Heinz 57 steak sauce.
"Passenger 57" is a 1992 film starring Wesley Snipes.
"57 Channels (and Nothin' On)" is a song by Bruce Springsteen featured on the 1992 album, "Human Touch".
Thrice (three) times 19 equals 57.
17. Minutes per NBA game; U.S. contiguous states; NASCAR's Jimmie Johnson; 1982 Eddie Murphy film. What number is related to these clues?

An NBA game is 48 minutes long - 4 periods of 12 minutes each.
The contiguous states are also called the lower 48 states which excludes Alaska and Hawaii, used to indicate the continuously joined states.
NASCAR's Jimmie Johnson began driving the number 48 car for Hendrick Motorsports in 2001.
Eddie Murphy starred in the 1982 film, "48 Hours".
18. Number of human chromosomes; high peaks of the Adirondacks; NFL defensive scheme designed by Buddy Ryan; 2003 Tim Robbins film "Code __". What number is related to these clues?

The number of chromosomes in humans is 46.
The 46 peaks of the Adirondacks refers to the 46 high peaks of the New York range.
Buddy Ryan designed the 46 defense while defensive coordinator for the Chicago Bears.
"Code 46" starred Tim Robbins and Samantha Morton.
19. Signatures on the U.S. Declaration of Independence; Joe Dimaggio's consecutive games with a hit record; kbit/s speed of analog telephone; Luke Air Force Base Fighter Wing group. What number is related to these clues?

There are 56 signatures on the U.S. Declaration of Independence.
New York Yankee Joe Dimaggio set the record for most consecutive games with a hit at 56 in 1941.
The speed of an analog telephone transmits at 56 kbits per second.
The 56th Fighter Wing group of the U.S. Air Force is based at Luke Air Force Base in Arizona.
20. Vick's "Formula"; Ides of March year B.C.; "magnum" caliber number; Wyoming. What number is related to these clues?

Vick's Formula 44 is a brand name of cough suppressants.
Julius Caesar was killed on March 15, in the year 44 B.C., which became known as the Ides of March.
The .44 Magnum was developed by Elmer Keith in the 1950's.
Wyoming is the 44th U.S. State.
Source: Author Sprink1234 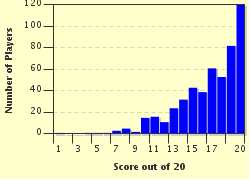 
Other Destinations
Explore Other Quizzes by Sprink1234