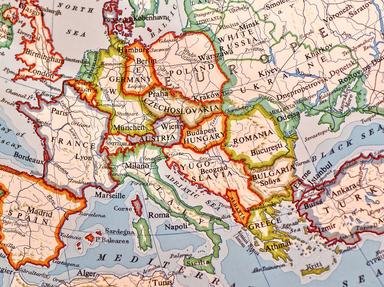 Famed for its Rock, Gibraltar is more than limestone and monkeys! Take this quiz to learn more about the culture and customs of the Gibraltarian people.

Quiz Answer Key and Fun Facts
1. Gibraltarian culture and customs have been greatly influenced by British, Spanish and which other culture?

Gibraltar's culture is a blend of mostly British, Spanish and Genoese culture. Many inhabitants today can trace back their origins to Genoese ancestors and the Genoese influence can be seen not only in a number of words in Gibraltar's local dialect (Llanito), but also in its cooking.

The national dish "Calentita" is believed to be related to the Genoese recipe for "faina", both made primarily from chickpeas. Other cultures which have influenced Gibraltarian culture include the Morrocan, Jewish and Indian cultures, which are among Gibraltar's most dominant ethnic minorities.
2. Over the centuries, Gibraltar has been occupied or inhabited by a number of different civilisations and peoples. Which of these is *NOT* one of them?

As far as is known, the Japanese never settled on the Rock at any time during its history. One of the first inhabitants of Gibraltar were the Neanderthals, whose remains can be seen today in the local museum. If you have taken my other quiz, you'd know that the first Neanderthal remains were actually found in Gibraltar! Other past settlers include the Romans (whose name for Gibraltar was "Mons Calpe", named after one of the Pillars of Hercules), the Phoenicians (who conducted trade in the region) and the Moors (who named the Rock "Jebel Tarik", "Tarik's Mountain", which became "Gibraltar").
3. The current location of the Gibraltar Museum incorporates the remains of which kind of archaeological site into its construction?

One of the major attractions of Gibraltar's museum are the Moorish Baths, which were discovered in the cellar of what was then known as Bomb House (which has since become the Museum). The Baths are mostly intact and date back to the 14th Century and were believed to be among the best of their kind at the time. Photos of the Baths can be found at the Museum's website at http://www.gib.gi/museum/p111.htm. None of the other abovementioned sites can be found in the Museum, although an artificial "Neanderthal Cave" was created in the museum some years ago and houses the remains of Neanderthal skeletons found in Gibraltar!
4. Since it came under British command in 1704, the Spanish have made several attempts to recapture the Rock in the form of "sieges". One of these is known as the "Great Siege" and took place over which time period?

The war known as the "Great Siege" took place from 1779 to 1783, with 1782 being the most fierce period. During this time, the Fortress of Gibraltar was constantly attacked, leading to the deaths and poor living conditions for the Gibraltarians, and systems of tunnels were carved through the Rock to allow British troops to defend the Rock. During this time, General Elliot, the Governor at the time, proved himself as an excellent leader and set an example to his troops by surviving on 4 ounces of rice a day.

After several years of fighting, the Spanish fleets and troops lost the battle.
5. During the time of the Great Siege, it is believed that the national dish of "Calentita" was widely eaten, using the limited ingredients that were available to the local people. "Calentita" is made mostly from ingredient?

The major ingredient of "Calentita" (meaning "warm" in Spanish) is chickpea. Chickpea flour, olive oil, salt, pepper and water are the main ingredients for this dish and a recipe for "Calentita" can be found at http://www.gibraltar.gov.uk/food.asp. Although "Calentita" became quite popular during the Great Siege
6. During the Second World War, civilians (mostly women and children) were evacuated.

Much of Gibraltar's civilian population was evacuated during the Second World War, as the Rock was used as a major military base. At its height, it is believed that there were some 30,000 troops based on the Rock. The civilians, mostly women and children, were evacuated to places such as England, Madeira and Jamaica and remained there for a number of years.

Others merely crossed the border into Spain, which was a neutral country at the time. Repatriation of the population began in 1944 and lasted for 6 years.
7. The local song "Llevame Donde Naci" came into being during the time when Spain's border with Gibraltar was closed.

The song "Llevame Donde Naci" was actually created during the time of the evacuation during WWII, its English translation meaning "Take Me Back to Where I was Born". The song is still sung today, very often at the National Day celebrations on the 10th September.
8. Onto some national symbols now. The national flag and Arms of Gibraltar feature which landmark?


Answer: A castle and key

The flag and coat of arms of Gibraltar feature a red castle with a key, symbolizing the Fortress City of Gibraltar. This national symbol was granted by a Royal Warrant by Queen Isabella of Castille in 1502. The rest of the flag is divided into 2 horizontal sections, 1 white (top) and 1 red (bottom).
9. Which of these is considered the national bird of Gibraltar?

The Barbary Partridge is the national bird of Gibraltar and appears on one of the denominations of the local currency (on the 1p coins). Other national animals include the Barbary Ape, for which Gibraltar is famed and which appear on the 5p coins. Dolphins are also treasured animals in Gibraltar and many of them can be seen in the Bay as well as on the 50p coins.
10. Gibraltar celebrates its National Day on which day?

Gibraltar's National Day occurs every year on the 10th of September, in recognition of the first Referendum held in 1967 where Gibraltarians were asked whether they wished to remain British or not. On National Day, most Gibraltarians can be seen in the streets and numerous events held on that day dressed in the national colours, red and white. National Day, however, is a rather recent creation, having only come into existence in the 1990s.
11. Time for another musical question! The singer/songwriter Albert Hammond is originally Gibraltarian.

Albert Hammond is in fact Gibraltarian and a very successful one too! Although he was born in London in 1944 as a result of the evacuation, he is a native Gibraltarian and grew up in Gibraltar once the civilians were repatriated. Over the years, he became interested in singing and songwriting and has since written the lyrics for a number of well-known songs, such as "The Air That I Breathe" (by The Hollies, among others) and "When I Need You" (sung by Leo Sayer, Celine Dion and numerous other singers).

Although he no longer lives on the Rock, he does maintain very close links with his homeland and owns a restaurant in Casemates Square. On a related musical note, his son Albert Hammond Jr is a guitarist for The Strokes.
12. Gibraltar is home to a number of budding authors, most of whom are just published locally but who are nonetheless talented. Which of these is *NOT* a book written by a Gibraltarian?

"The Gibraltar Factor" is NOT written by a Gibraltarian. It is the work of author Matthew Hunter and features Gibraltar heavily in its plot. "Sherlock Holmes in Gibraltar" was written by Dr Samuel Benady and features the famous detective created by Sir Arthur Conan Doyle. "Sonia and the Rock Ape" is a charming childrens' book written by Marie Bensusan, which sees a wheelchair-bound girl befriending a Rock Ape. "We Weep No More" was written by Peter Buttigieg and is based on his own childhood.
13. Several famous people have tied the knot on the Rock. Which of the couples below got married in Gibraltar?

John Lennon and Yoko Ono tied the knot in Gibraltar in the British Consulate Office on March 20th 1969 before proceeding to Amsterdam for their honeymoon. The wedding was kept relatively secret for fear of Beatles fans causing chaos and the couple were only on in Gibraltar for just over an hour. The ceremony was performed by Registrar Cecil Wheeler.
14. Baby girls born in Gibraltar often have their ears pierced soon after birth.

Although there are some exceptions, most baby girls born in Gibraltar have their ears pierced at an extremely early age and it is almost tradition for a family member to bring along some very small earrings for the newborn girl. I'm thankful for this particular custom as I doubt I would have had my ears pierced when I was concious it was happening!
15. To finish off, I want you to fill in the blank in this line of Gibraltar's anthem. "Gibraltar, Gibraltar __________________________".


Answer: "the rock on which I stand"

The lyric line is "Gibraltar, Gibraltar, the rock on which I stand". Full lyrics for the Gibraltar anthem can be found at http://www.gibraltar.gov.uk/natsymbols.asp. Although this is a song very often sung at national celebrations and events, the official anthem is actually "God Save the Queen", due to Gibraltar's status as a British colony. Well, I hope you enjoyed the quiz and learned a few new things today! Please feel free to rate my quiz and see you next time.
Source: Author DigitalAngel 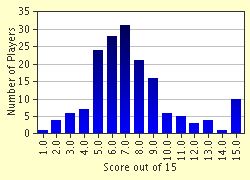 
Other Destinations
Explore Other Quizzes by DigitalAngel