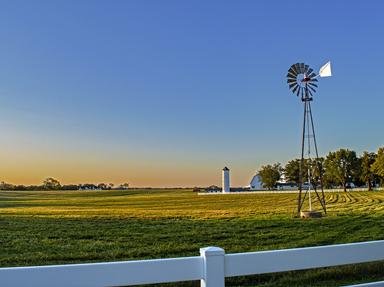 Kansas is in the middle of the US and is a very agriculturally diverse state. Located in the Great Plains, this state is made up of geographically very flat grasslands.

Quiz Answer Key and Fun Facts
1. What blossom was named, in 1903, the State Flower of Kansas?

The sunflower is mostly native to North America where it grows all over the Midwest. It is cultivated for its seeds which are consumed as a very popular snack food. They are heliotropes and are usually seen facing eastward.
2. What is the other name for the Barred tiger salamander, the State Amphibian of Kansas?

The nocturnal Western tiger salamander or Barred tiger salamander was declared the State Amphibian of Kansas in 1994. The eat worms, insects and slugs and spend most of their time on the ground but occasionally do go up into trees.
3. What color is most galena, the State Mineral of Kansas?

Known about for centuries, galena is the black primary mineral that contains lead. You must take care when handling these crystals in that they shatter easily. Galena also tarnishes after it has been cleaved but easily cleans with soap and water. Galena, Kansas takes its name from the mining for this mineral that used to go on there.
4. Which one of these fish was named the State Fish of Kansas?

The Channel catfish is a common fish located all over the eastern parts of North America. It can grow to 100 lbs. and is an omnivore that eats a huge variety of things. They have sharp spines on their dorsal and pectoral fins.
5. In 1955 the State Animal of Kansas was named to be the American Bison.

In 1955 the American Bison or buffalo was named the State Animal of Kansas. They used to live in the Midwest in huge numbers before they were almost driven to extinction by hunting. There are now large herds of bison in the Kansas grasslands.
6. In 1903, which of these birds was named the State Bird of Kansas?

The Western meadowlark is a ground nesting bird. The diet of the meadowlark consists of seeds and some insects. It has a yellow breast and black and white side and wing feathers.
7. What common insect is the State Insect of Kansas?

There are three types of honeybee: the drones, the workers, and the queen. The workers make honey and honeycomb and are all female. The drones, which are all males, mate with the queen. The queen bee lays all the eggs. The work of the honeybee goes on 24-7.
8. Which large tree was named the State Tree of Kansas in 1937?

In 1937 the state legislature named the cottonwood tree the State Tree of Kansas. It flowers in the spring and is often bigger around than it is tall. It grows naturally in Kansas where it is considered to be "the pioneer of the prairie".
9. The State Gemstone for Kansas is Jelinite Amber.

Jelinite was originally called kansasite. It was named after George Jelinek who found the first specimens in 1937. It is found along the Smoky Hill River in Ellsworth County, Kansas. The site is no longer accessible as it is under a huge water reservoir.
10. In 1985 which one of these turtles was declared the State Reptile of Kansas?

The ornate box turtle is endemic to the Great Plains of the US. The females are often bigger than the males. It is a protected species in Kansas but is found statewide. They feed on grass and often burrow into the ground for protection from predators and from high or low temperatures.
Source: Author dcpddc478