Do you know which rivers run through which state capitals? Take this quiz and find out.

Rising in the mountains of west central Oregon, the Willamette passes through many Oregon cities, including Salem, before it joins the Columbia River near Portland.
4. Which river flows through Boise, Idaho?

"Boise" comes from the French "bois", meaning wooded. Early 19th-century French-Canadian fur trappers gave the river its name because of the many trees along its banks. The town of Boise later took its name from the river.
5. The North Canadian River flows through which state capital?

The 760-mile-long North Canadian rises in northeast New Mexico, and flows generally southeast till it joins the Canadian River in eastern Oklahoma.
6. Des Moines, Iowa, lies at the confluence of the Des Moines and what other river?

The Raccoon rises in northwest Iowa and flows about 200 miles southeast till it joins the Des Moines.
7. The 1,450-mile-long Colorado River does not flow through any state capital. However, there is another, much shorter, Colorado River, which does. Which capital does this shorter Colorado flow through?

This Colorado River rises in Cochran County on the Texas-New Mexico border and flows for several hundred miles to the mouth at the Gulf of Mexico.
8. How many state capitals does the Mississippi River flow through or by?

The Kansas River is sometimes known also as the Kaw River. It drains the northern part of the state, while the Arkansas River system drains a large part of the southern section.
10. Lake Wingra lies inside of which state capital?

Lake Wingra and the other lakes surrounding the city make Madison one of the most beautiful of all the state capital cities.
Source: Author chessart 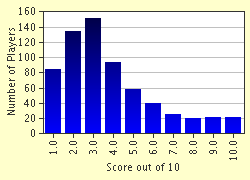