This quiz will ask about rivers along which state capitals of the Eastern half of the United States are located.

The 444-mile-long Susquehanna rises at Otsego Lake in central New York state. It then flows south across Pennsylvania into Maryland, where it empties into Chesapeake Bay.
2. Which state capital is located at the confluence of the Olentangy and Scioto Rivers?

The 237-mile-long Scioto is the Ohio River's longest tributary in Ohio.
3. Richmond, Virginia, lies on which river?

The James River rises in the Allegheny Mountains and flows southeastward for about 340 miles to the Chesapeake Bay.
4. The Chattahoochee River forms part of the west border of which capital city?

The Chattahoochee River also forms much of the border between Alabama and Georgia. Those states, along with Florida, all look to the Chattahoochee as an important water resource, and as of February, 2003, the three states are locked in a vigorous legal dispute over how each state will use and preserve this important source of water.
5. Which river flows through downtown Nashville, Tennessee?

The 165-mile-long Kennebec River rises in Moosehead Lake in west-central Maine, and empties into the Atlantic Ocean near Bath.
7. Which state capital lies on the Congaree River?

South Carolia's capital was originally located in the coastal city of Charleston, but the legislature voted in 1796 to move it inland to Columbia.
8. Albany, New York, lies on which river?

Named of course for the English explorer Henry Hudson, who sailed up the river in 1609, the 306-mile-long Hudson begins in the Adirondack Mountains, then flows southward near the eastern boundary of New York and empties into the Atlantic Ocean at New York City.
9. Which state capital lies at the meeting place of the Grand and Red Cedar Rivers?

The 170-mile-long Grand River is Mchigan's largest river. It flows into Lake Michigan at Grand Haven.
10. Annapolis, Maryland, lies on which river?

The rivers listed are all Maryland rivers.
Source: Author chessart 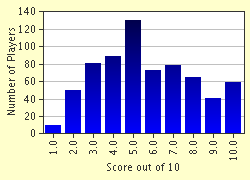