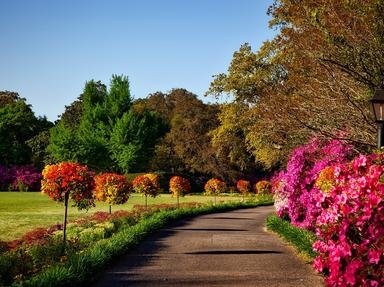 The Adventurous State of Alabama Quiz

I am traveling around the 50 states that comprise the U.S.A. This time the stop is in the adventurous state of Alabama. Known as the "Heart of Dixie", a visit to this state will provide any tourist with a huge choice of places to go and things to see.

Quiz Answer Key and Fun Facts
1. Which of the following options is the name of this lovely bronze statue located in Vestavia Hills, Alabama?

Located in Vestavia Hills, Alabama, this beautiful bronze statue is known as "Liberty Enlightening the World". It is a replica of the iconic statue of the same but more commonly known as "The Statue of Liberty". Originally, it sat atop the Liberty National Life Insurance Company building. It was cast in 1956, erected in 1958 and moved to it new location in 1989.
2. Any wandering visit to Alabama should include a stop at which of these cities, the oldest city in the state?

Mobile, Alabama, which sits on the beautiful Gulf of Mexico, was founded in 1702 as the original capital of the Louisiana Territory. The city was the birthplace of the original Mardi Gras, and is famous for its plethora of beautiful historic antebellum buildings including the Old City Hall, The Bragg-Mitchell Mansion and the Battle House Royale. If history is your cup of tea, a visit to Mobile would provide you with multiple interesting locations to tour.
3. Which of these institutions of higher learning can be visited while touring eastern Alabama?

Twenty years after the city of Auburn was founded in 1836, Auburn University was established as the East Alabama Male College. The university is the oldest four-year, coeducational school in the state, and the second-oldest in the southeast. This fine college has over 140 majors to choose from.

The city of Auburn is makes an interesting stopover when visiting Alabama, as it has many museums, orchestras, and theaters to visit.
4. The Newsome Sinks in Morgan County, Alabama, is a fine example of which of the following geologic formations?

A karst is a landscape formed by the dissolution of soluble rocks such as limestone and dolomite. A karst is characterized by caves, small waterfalls, sinkholes, and underground drainage systems. These features are formed by the collapse of underlying caves due to internal drainage.

This beautiful location is home to many varieties of rare birds, bats and plant life. If you are looking for a picturesque location for a picnic lunch, here it is.
5. Cheaha Mountain is the highest point in the state of Alabama.

Alabama is not known as a state with high elevations. Cheaha Mountain is the highest mountain in the state at 2,413 ft. (735 m). It is part of the very end of the Blue Ridge Mountains. Located in central Alabama is part of the Cheaha State Park, the oldest state park in the state.

This popular tourist destination offers beautiful scenery, a lodge, restaurant, hiking trails, and campsites. In case you forget to bring something with you, there is also a general store available at the park.
6. In which Alabama city, named after an American Civil War general, can you visit the breathtaking Cathedral Caverns?

Originally named the Bat Cave, the Cathedral Caverns in Grant, Alabama, was opened to the public in the 1950s. The state of Alabama purchased the caves in 1987 and renamed them "The Cathedral Caverns". One of the most unusual features of the caverns is its very large entrance, one of the largest in the world.

These beautiful caverns are home to some very unique rock formations, including "Goliath", one of the largest stalagmites in the world. The aptly named Mystery River flows through the caverns and can cause flooding during periods of heavy rainfall.
7. Which of the following festivals might you choose to see on a visit to Burkville, Alabama, in late August?

The Okra Festival is a celebration that started in 2000 in honor of the only vegetable crop that managed to survive an unusually hot summer. It features southern music, cultural arts, and some of the best food (including okra) in the state. A visit to this festival provides you with a true taste of Dixie.
8. If you are a NASCAR fan, a visit to Alabama will certainly involve a visit to which of the following race tracks?

Although the town only has a population of just over 15,000, it is home to the oldest bank in the state, Talladega College, and the International Motorsports Hall of Fame.
9. Noccalula Falls are the only waterfalls in the state of Alabama.

Although Alabama is not known for tall mountains, one of the state's nicknames is "Land of a Thousand Waterfalls". One of the state's loveliest cataracts is the found in the Noccalula Falls Park. A visit to this popular tourist stop provides the visitor with multiple activities including golf, train rides, hiking, camping and a pioneer village.

It is just one of the many waterfalls to be seen in Alabama.
10. While traveling through Alabama, you might like to stop and see the Pickens County Courthouse reputed to be the home of which of the following paranormal things?


Answer: The face of a dead man embedded in a window.

The Pickens County Courthouse is located in the small town of Carrollton, Alabama. It is noted for its "Face In the Window". It is said to be the face of freed slave Henry Wells who was accused of trying to burn down the courthouse. He attempted to hide from a lynch mob in the attic of the courthouse.

He was looking out the window down at the angry crowd, protesting his innocence and vowing that he would haunt them forever if he was killed. At that instant lightning hit the window, forever etching his face in the window.

The image is said to be easily seen from the outside, but cannot be seen from the inside of the window. Sounds interesting to me!
Source: Author dcpddc478 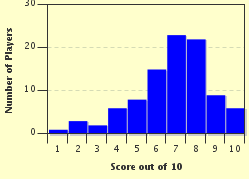