Hitler & the Third Reich: VI - The Road to War Quiz

Hitler has full control of Germany and now the tentacles start to spread out over Europe. World War II is fast approaching ...

Quiz Answer Key and Fun Facts
1. Hitler's goal was to unite all of the German speaking people. He also planned to seize land from other countries. What is the term/name given to the land that was destined to be acquired in eastern Europe for the German people?

Lebensraum literally means "living space". The notion that a great power actually needed a vast empire was commonplace from about 1880 till well into World War II.

The "Herrenvolk" was the "master race", the Germans.

"Untermenschen" was the name given to those that were considered inferior to the German people, and who were destined to be conquered in the east as well as Jews and Romani/Sinti. The word means "sub-humans".

Lebensborn was the name of the "Fountain of Youth" program, Himmler's scheme to breed "Aryan" children.
2. In 1935 Hitler made a speech that said, "Germany neither intends nor wishes to interfere in the internal affairs of _________ , to annex ___________ or to conclude an anschluss". To what country was he referring?

Anschluss meant unification. A treaty was signed in 1936 with Austria also promised complete independence for Austria.
3. On the 3 March 1936 Hitler sent German troops into which of these countries or areas? Where did Hitler send these troops?

The Rhineland bordered France. The area had been designated a demilitarised zone as part of the terms of the Treaty of Versailles. It was a huge gamble by Hitler when he sent three battalions of German troops into the Rhineland. The gamble paid off, even though his own generals had advised against it. France did not send any troops to challenge the occupation and, even though Germany had just breached the Treaty of Versailles, no action was taken.
4. This country was embroiled in a war between 1936-1939 and requested assistance from Hitler. As a result, Hitler supplied military support and used the war as a testing ground for his weapons of war. Which country?

The Spanish Civil War commenced on 17 July, 1936. Francisco Franco requested aid from Hitler and it was supplied. Hitler sent over war planes, tanks (Panzers) and anti-aircraft batteries. The famous Condor Legion participated in the war.

The war was used as an opportunity to test out bomber tactics and various weapons. As a result the famous 88mm anti-aircraft gun, and planes such as the Messerschmitt Bf 109, were given a work out and modifications made to improve them.
5. With the Rhineland in German hands, Hitler announced to his generals in 1937 the next target on his hit list. What country was next to fall and be occupied by the Nazis?

The "Anschluss" or "Unification" took place next. German troops marched into Austria on 12 March, 1938. Hitler was greeted with delirious applause in Linz and Vienna. Hitler then declared Austria an integral part of the Third Reich. The Chancellor of Austria, Kurt Schuschnigg, had initially resisted Hitler's diplomatic attempts at reuniting Austria with Germany. On 26 March a warning was given to the Jews by Hermann Goering to leave Austria.
6. The Sudentenland was the next piece of land to end up in the hands of Hitler and the Nazis. To what country did the Sudentenland belong?

The Sudentenland was part of Czechoslovakia, and contained a large number of German speaking people. When Austria fell to ("was unified with") Germany, it left Czechoslovakia in a bad situation - it was now surrounded by Nazi controlled land on three sides.

Hitler made demands to have the Sudentenland handed over into his control. Negotiations (held in September 1938) were made between Hitler and the leaders of the French, English and Czech governments. As a result of these negotiations, over 18,000 square kilometres of Czech land was handed over to Germany. Regardless of Hitler's promises to stop seizing land, German troops poured over the border into Czechoslovakia and seized the remainder of the country on 14 March 1939.
7. What was the term given to the policy, implemented by Britain and France, that agreed to accepting Hitler's demands?

The word "appeasement" was given above all to the foreign policy adopted by the British Prime Minister, Neville Chamberlain, in response to Hitler's demands. However, the policy was older. (Already in 1921 David Lloyd George had said that the Treaty of Versailles was too harsh). It also appears that very few politicians in either Britain or France had much understanding of that they were dealing with a régime with boundless territorial ambitions.

There was no enthusiasm for war in either Britain or France. The thinking behind it was that Germany had "legitimate grievances" and that concessions were made to Germany to redress these grievances war could be avoided. The now virtually standard view that appeasement was a disastrous policy seems to have "solidified" only in May-June 1940.
8. In January 1939 Hitler's demands continued. This time he began demanding a stretch of land that contained a valuable seaport. From what country was he demanding this land from?

The "Polish Corridor" was a thin strip of land that separated Germany and East Prussia. It contained the port of Danzig, the only major seaport the Polish people had, so naturally the Poles were not in any hurry to give it up. In August 1939 an proposal/ultimatum was issued to Poland, but this was not going to change anything - Hitler had already issued the order to attack Poland.

East Prussia was located on the Baltic Sea, on the eastern side of Germany. The majority of East Prussia shared a border with Poland (and a smaller eastern border with Lithuania). Ethnically, East Prussia was overwhelmingly German, with Germans making up over 80% of the population.
9. In May 1939 Hitler signed the "Pact of Steel". With what country was this signed?

The pact was an agreement between Mussolini and Hitler providing support for each other should any future wars take place. The duo would remain loyal to each other until 1943 and arguably until the end of World War II.
10. Three months later, in August 1939, Hitler signed another pact to prevent any hostilities between Germany and this country. What country entered into this non-aggression pact?

The Nazi-Soviet non-aggression pact was signed in August 1939, just before World War II started. It didn't take Hitler long to break it. On 22 June 1941 Hitler's tanks poured over the border into Russia. The pact stipulated that Germany and Russia would not attack each other and if either country was attacked by a third party then they would not participate or support the aggressing country.

When the pact was announced to the world there was a 'Secret Additional Protocol' that was kept under wraps. The details of the secret protocol covered how plans for carving up Poland and allocated Baltic republics, Finland and part of Romania to the Soviet Union.
Source: Author Lssah 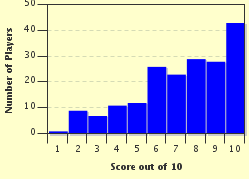 
Other Destinations
Explore Other Quizzes by Lssah