This is a chilling look at WWII and some critical leaders during the Nazi reign of terror. I have also included information for one person who led the attempt to assassinate Hitler!

Hitler became Chancellor in 1933. He appointed himself Fuehrer the following year on President Hindenburg's death. He was the Fuehrer from 2 August 1934 till 30 April 1945, when he committed suicide in his bunker in Berlin at the age of 56.
2. Please name the head of the SS, the police and the entire terror apparatus of Nazi Germany.

Himmler was very organized and admired the structure of the Jesuits. He was the leader of the Nazi Security Department. He was also in charge of the Gestapo, the SS, and the death camps. He also felt the SS should be able to survive on porridge and mineral water. He was a vegetarian and only believed in herbal medicines. He committed suicide shortly after being captured by the British and avoided trial.

Reinhard Heydrich was the Deputy Protector of Bohemia and Moravia. Also, the Chief of the Reich Main Security Office which included Gestapo, SD and Kripo Nazi police. He also chaired the Wannsee Conference.

Kaltenbrunner succeeded Heydrich in his SS and SD posts after the latter's assassination.
3. Name the commander referred to as 'The Desert Fox' for his leadership abilities.

He was an excellent commander of the 'Afrika-Korps' in the Western desert campaigns, earning him the title 'Desert Fox'. He was also noted for obeying the customs of war. He was a very professional soldier and one of the most respected German military commanders.
4. This SS officer was in charge of "Jewish Emigration". He was....?

He was a member of the SS (Schutzstaffel). He was in charge of the logistics of the "Final Solution". In 1942 he took the minutes at the the Wannsee Conference which co-ordinated the operations of the various agencies involved in the Holocaust. Late in 1944 he reported to Himmler that six million Jews had been 'disposed' of.

In 1938 he was appointed Hitler's deputy and legal heir. After the war broke out he was made the leader of the Luftwaffe. He later surrendered after Hitler's suicide to the US Army in 1945. He was tried and found guilty at Nuremberg. When he was to be executed by hanging he demanded to be executed by firing squad as a military officer.

His request was denied. He committed suicide on October 15,1946. There are still questions on how he received the poison he took at that time.
6. This Nazi leader was in prison with Hitler in 1924 and assisted him in writing "Mein Kampf" ("My Struggle").

He was appointed Hitler's deputy in April 1933, but was gradually 'sidelined' by Himmler, Goering and others. There has been endless speculation about the reasons for his flight to Britain in May 1941. At Nuremberg he was sentenced to life imprisonment and he died in prison in 1987.
7. Who was referred to as 'The Bitch of Buchenwald'?

She was very cruel to prisioners. At first she was dealt with very leniently by a US militaty tribunal, but following her release she was rearrested on other charges by the Germans. She was convicted, sentenced to life imprisonment and in 1967 committed suicide in prison.
8. There was a physician that was known as 'The Angel of Death', he was..

This doctor was at the death camp Auschwitz-Birkenau. He conducted horrible experiments. Some of his experiments include chemicals into the eyes in an attempt to change eye color. He placed victims into pressure chambers, tested drugs on them, castrated and froze people to death.

He was obsessed with twins and attempted to sew them togther and transfer organs between them. He did all these things without anesthesia! He also injected them with lethal germs. Also he would place them in ice and then boiling water to determine at what temperature their blood would boil. Just the thought of a fraction of what he did brings chills to me.
9. Hitler had an urban planner and Minister of Armaments. Please name this person.

He was a talented architect and designed the grounds in Nuremberg for the Nazi rallies. He was a genius on organization and kept the war machine functioning. He was credited with prolonging the war at least a year. This prolonged the ruin of the country even more and added to the mass murders.

In the last months of the war he realized Hitler was insane and actually protected Germany from even greater distruction as Hitler had ordered the 'scorched earth plan'. He died in 1981, he had been sentenced to twenty years at his trial.
10. The movie 'Valkyrie' was based on the plot to kill Hitler. This German officer became unhappy with the policies of the Nazis and lead an attempt to assassinate Hitler. Was this leader Count Claus Schenk von Stauffenberg?

Colonel Stauffenberg was a German Army officer. He was from an aristocratic Roman Catholic family. On July 20, 1944 he left a bomb in a briefcase under the table at a staff meeting at 'Wolf's Lair' in Rastenburg. The bomb went off as planned but the table protected Hitler from being killed.

He returned to Berlin and was arrested and executed at midnight by firing squad. He is now regarded as a hero by Germany. His wife Nina lived until April 5, 2006 and died at the age of 92. What an amazing woman she must have been. Colonel Stauffenberg was missing his left hand and fingers from a 1938 mishap and his eye from a landmine explosion in 1943.

He was the youngest of three sons, he was well thought of and a devout Catholic per his family. Hitler punished over 20,000 he associated in some way to the failed Valkyrie plot.

They were either killed or sent to concentration camps. He has been credited as the leader, however we know this was a very involved plot that may have involved the very top army officials as well.
Source: Author vickielynne 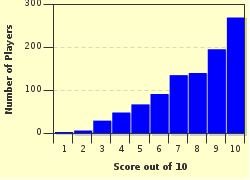 
Other Destinations
Explore Other Quizzes by vickielynne