The Nazification of Germany Trivia Quiz

This quiz outlines the steps of how Hitler became the supreme ruler and formed a totalitarian dictatorship in Germany. This quiz also shows how Germany was 'Nazified'. I hope you enjoy it and learn some facts! Good luck!

Quiz Answer Key and Fun Facts
1. During the 1933 election, what was Hitler's main rival political party?

Throughout the 1920s the Social Democratic Party had had many more seats in the house than the Nazis - but that was before the Great Depression!
2. What did 'Nazi' stand for?

Hitler loathed socialism but he used that word for his party - probably in an attempt to broaden its appeal. 'Sozi' was a nickname used in the 1920s and 1930s for 'Sozialist'.
3. The burning down of the German parliament building created a panic that made it easier for Hitler to persuade the German parliament to pass his laws, enabling him to rule by decree. What was the building called?

The Communist Party was blamed for the burning of the Reichstag - and promptly banned. However, it is often said that the Nazis that set fire to the Reichstag.

Goebbels made very efficient use of radio, theater, newspapers and later film for propaganda.
5. Who was appointed Chief of the Luftwaffe (German Air Force)?

Goering was one of the very few leading Nazis who wasn't a lapsed Roman Catholic, but nominally at least a Protestant. The German Luftwaffe proved to be quite successful in the first years of the war. The first major setback for the Luftwaffe was the Battle of Britain.
6. Who was the SA leader that was assassinated in the 'Night of the Long Knives' because he seemed to be a potential rival to Hitler?

Roehm also seemed to take some of the 'populist' or quasi-socialist aims of the Nazi Party at last half seriously. The most important such aim was the public ownership of department stores ... (!)
7. Who was the President of Germany that appointed Hitler as Chancellor and died in August of 1934?

Hindenburg was really senile in his later years.
8. This act gave Hitler the authority to rule by decree for five years. What was it act called?

These powers were later renewed indefinitely.
9. Who was appointed the Deputy Leader of the Nazi Party?

Rudolf Hess was sentenced to life imprisonment at the Nuremberg Trials.
10. Who was appointed as the the Nazi Foreign Minister in 1938?

Ribbentrop was sentenced to death at the Nuremberg trials for his major involvement in planning and unleashing the war. He was hanged.
Source: Author Corycool 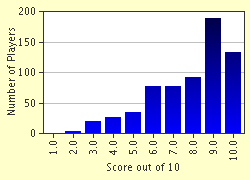