This quiz takes a quick look at moments that shaped German, European and world history from 1923 through 1939. I hope you like it!

Quiz Answer Key and Fun Facts
1. November 1923: Adolf Hitler and the Sturmabteilung (SA) interrupted a speech by the Minister President of Bavaria in what turned out to be a failed coup. What is the name commonly given to this event that resulted in Hitler's incarceration?

The definite failure of this putsch by Hitler and the SA is of historical significance as it symbolises the moment that Hitler decided to obtain power not by force but through the medium of politics. The despot Adolf Hitler would have to be elected to power by the will of the people.
2. June 1925: Hitler created a group of personal bodyguards that would grow into a massive machine of hate and murder that operated in the infamous killing centres, the death camps. What was the name of this organisation that was under the administration of Heinrich Himmler?

The SS (Schutzstaffel) was split into many divisions but perhaps the most despicable division was that which ran the concentration and death camps. The SS Death's Head Units or SS-Totenkopfverbände systematically murdered Jews, Gypsies, homosexuals and political opponents in their thousands.

Heinrich Himmler was given the unique rank of Reichsführer-SS and the job of running the SS. Other Nazis in the upper echelons of this organisation included Reinhard Heydrich.
3. July 1927: The propaganda machine, that would later become synonymous with Joseph Goebbels, intensified with the introduction of rally events in which German city?

Propaganda is one of the keys to success for any dictator and Adolf Hitler was no exception. During Hitler's Nazi regime (1933-1945) the rally in Nuremberg completed a relentless barrage of propaganda which also took the form of newspaper articles, news reels, radio broadcasts and dubious manipulation of the education system.
4. January 1933: Adolf Hitler took a momentous step forward in lawfully gaining which high ranking role in the German political system?

Hitler became Chancellor of Germany on January 30, 1933 after several months of turbulence in the Weimar system of governance. In November of the previous year, Franz von Papen resigned from the post of Chancellor and his successor was Kurt von Schleicher who was inaugurated on December 4, 1932. Hitler would use the chancellery as a platform for his aim of ultimate and unopposed dictatorship of Germany under the title of Führer, which combined the chancellorship and the presidency.
5. February 1933: One of the great 'whodunits' of history unfolded in Germany. For many decades academic and amateur historians have debated, argued, pondered and hypothesised about who was behind one of the most famous arson attacks in European history. Part of which German structure was burnt down in this year?

Whether the fire was the work of the German Communist Party (KPD), a Dutch Communist named Marinus van der Lubbe or the Nazi party (NSDAP) the aftermath was exploited by Hitler and his fellow fascists. As a direct result of this fire, President Paul von Hindenburg (with a lot of cajoling from the far right) issued the Decree for the Protection of People and State which suspended civil liberties and was used by the Nazis to suppress political opposition, especially from the Communists.
6. March 1933: Hitler began implementing his plans very quickly and in particular advanced the issue of what to do with the 'racially impure'. This month saw the establishment of the first concentration camp. Which was it?

Dachau was the first in a series of dreadful constructions whose aim was to detain political dissidents and the 'racially inferior'. In 1933-34 the main function of these camps was to punish and terrorize opponents of the Nazi régime. The inmates were systematically ill-treated, malnourished, beaten and used as slave labour. Over time the camps would become far more sinister.

In the late 1930s the SS turned inself into a major business entreprise, hiring out slave labour. From 1941-42 some of the camps became 'industrial' killing centres, such as was Auschwitz-Birkenau. Most of the new arrivals were sent straight to the gas chambers whilst others were systematically worked to death.

As well as the concentration camps there were extermination camps, like Sobibor and Treblinka.

As the name suggests, as soon as the detainees arrived at the camp they were exterminated. Choosing which of these institutions is worse is the impossible decision between two of the greatest evils in history.
7. June 1934: The Sturmabteilung ('Brownshirts') were instrumental in Hitler's rise to power, however they were perceived to be an assembly of thugs by many Germans. Hitler thus decided they needed to be removed before they became a hindrance and what resulted was the purge of high ranking members of the organisation. What night is this known as?


Answer: Night of the Long Knives

Ernst Röhm was probably the most notable figure to be killed in the purges known as the Night of the Long Knives. Ernst Röhm was the head of the SA, the paramilitary wing of the Nazi party (NSDAP). He was seen by much of the public and the army as uncouth and by the Nazi party as a liability that was increasing with time. Ernst Röhm was allegedly a homosexual and for a party that preached 'racial and social purity' this would be seen as hypocrisy since homosexuals were the target of much of the NSDAP's hate and discrimination. Most importantly, Röhm and the SA were seen as a threat to Hitler, and also the Reichswehr (the regular German armed forces under the command of President Hindenburg) had knowledge that Röhm wanted to unite them with the SA. What would make this more unpalatable to the Reichswehr is that they would be subordinates of the SA organisation.
8. March 1938: Nazi Germany's military forces were expanding and Hitler was ready to, in his opinion, right the wrongs of the Treaty of Versailles, by force. Hitler's aim was to bring all German-speaking people back into the fatherland. This first happened in March of 1938 in Austria. What was the annexation of Austria by Germany called?

The annexation of Austria was a key indication of Hitler's expansionist aims. The Sudetenland in Czechoslovakia was taken by the Germans later that year. This left Czechoslovakia severely weakened since a lot of the defensive equipment and infrastructure was in this area.

This made Czechoslovakia an easy target for occupation and the newly formed country was subsequently invaded. Hitler could no longer hide behind the idea of uniting all German speaking people into one nation as the area he invaded was populated by Czechs and Slovaks.

The road to war between Germany and her allies and Britain, USA and their allies had begun.
9. September 1938: The Munich agreement was signed by European statesmen. This is often seen as the leading example of appeasement in the inter-war years as it allowed Germany to take the Sudetenland from the Czechs. Who was the British prime minister who signed the agreement?

When one thinks of Neville Chamberlain, appeasement comes to mind. Along with French Prime Minister Édouard Daladier, Chamberlain allowed Germany to occupy the Sudetenland unopposed. Czechoslovakia was given a rather unfair ultimatum, relinquish your control of the disputed area or defend it by yourself.

The Czechoslovakian forces wouldn't have had the capacity to defend themselves against a strengthened and rejuvenated German military, and thus the Sudetenland became a part of the Third Reich. The rest of Czechoslovakia would soon follow and Chamberlain's policy of appeasement wasn't looking such a good idea.
10. September 1939: The Polish corridor became a significant area in world history. Adolf Hitler had previously expressed his desire to annex a particular city (that is now situated in Poland) and in September of 1939 he sent the military in thus inducing declarations of war from both France and Britain. What was this pivotal city?

Danzig, now known as Gdansk, is now a northern Polish city situated on the Baltic Sea. Hitler was warned that if German troops were ordered into the Polish corridor there would be a general war. The infamous dictator ignored the warning and invaded the area. The policy of appeasement that had epitomised European politics in the 1930s came to an end and WWII ensued.

I hope you enjoyed the quiz and thanks for playing!
Source: Author jonnowales 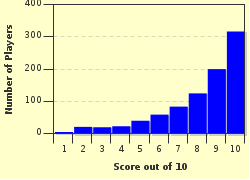