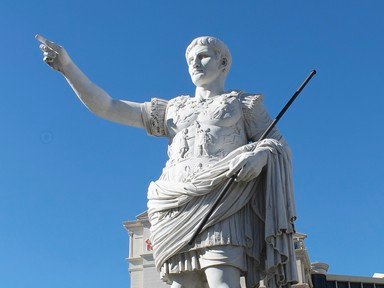 Julius Caesar. Exceptional orator, politian, general, beloved of the common Roman. This is my tribute to the great man's life and legacy. Enjoy :)

Julia, or a derivation thereof, was generally the name given to females born to a Julian father. Caesar's daughter, sister and aunt were all named Julia. Servilia, the mother of Marcus Brutus was his mistress and Cornelia his first wife.
2. From which Roman deity did Caesar claim descent?

Julius Caesar claimed descent from the goddess Venus via Aeneas (Iulius) her son.
3. During Caesar's childhood, he was nominated to become Rome's Flamen Dialis, a special priest of Jupiter. Which of these activities was Flamen Dialis banned from participating in?

These and other taboos; for example, seeing an enemy of Rome meant that Caesar could not serve in the army.
4. During his youth, Caesar was one of a number of Roman citizens to be proscribed, a punishment that could result in banishment, seizure of assets and death. Which general (later Dictator) of Rome ordered the proscription of Caesar, but eventually pardoned him?

Caesar was proscribed because of his relationship to Gaius Marius, an enemy of Sulla's.
5. What was distinctive about the horse that Caesar rode during battles?


Answer: The horse's hooves were cloven into five parts such that they looked like toes

Caesar was highly superstitious about his luck, insisting that he rode his "toed" horse during battle.
6. What was the name of the award that Caesar won following the capture of Mytilene?

The Corona Civica (the Civic Crown), made of oak leaves, was the second highest honour that could be received by a soldier. Caesar won this crown for saving the lives of his fellow soldiers during the battle of Mytilene.
The Grass Crown was the highest honour that was awarded to a soldier, usually a general who liberated a besieged army. Lucius Cornelius Sulla was awarded such a crown.
The Corona Navalis was awarded to sailors.
The Corona Triumphalis was worn by victorious generals during their triumphal parades through Rome.
7. True or False: Caesar was the first Roman to lead an expedition to Britain.

Caesar's first invasion of Britain took place on August 26th 55BC. He transported two legions, the 7th and 10th plus cavalry, but the opposition that they received forced them to retreat back to Gaul. For his second invasion, Caesar took with him five legions, 2000 cavalry and eight hundred transport ships. Britain however was not conquered until a century later.
For more details on all things Caesar, check out this website. http://heraklia.fws1.com/
8. Perhaps Caesar's most famous quote "Veni, vidi, vici" ("I came, I saw, I conquered") was said on August 1st 47BC following which battle?


Answer: The defeat of Pharnaces at Zela

Following Caesar's victory in the civil war, he travelled to Egypt where he placed Cleopatra on the Egyptian throne following the defeat of her brother Ptolemy's army in Alexandria. Prior to his return to Rome to assume the Dictatorship, Caesar defeated Pharnaces II, son of the former troublesome Pontic king Mithridates.

The defeat was in retribution for Pharneces defeat of a Roman army led by Domitius Calvinus in Pontus. It was following this four-hour battle that Caesar made this famous quotation.
9. Caesar was assassinated on the Ides of March 44BCE at a meeting of the Roman senate. Beneath which famous general's statue did Caesar fall?

It is thought that as many as 60 men conspired to rid Rome of the 'tyrant' Caesar. The main conspirators in Caesar's assassination were Cassius, Trebonius, Decimus Brutus and Marcus Brutus. Casca was the first to strike. It is reported that before he fell, Caesar covered his head and legs. The great man was stabbed 23 times.
10. Caesar named Gaius Octavius (later Augustus) as his heir. How were Caesar and Octavius related? 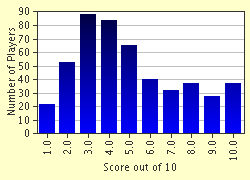 
Other Destinations
Explore Other Quizzes by science queen vj