Not First Place, Not Second Place, But Dead Last Quiz

We all remember the first man to walk on the moon, but who was the last? Do you remember the last time these never-to-be repeated events happened?

Quiz Answer Key and Fun Facts
1. In the year 404 AD, what happened in Rome for the last time?

In 404 AD a monk jumped into the Colosseum to separate the two gladiators and was stoned to death by the crowd. Emperor Honorius then banned the games, though they continued illegally outside of Rome. Criminals still were condemned to death by combat. The last recorded animal games were in the year 523.
2. In 1662 a shipwrecked sailor reported the last sighting of a dodo bird. On which island did these birds once thrive?

The Dutch were the first people to see the flightless bird in 1581. Around a hundred years later, the dodo, which had no real natural enemies, was extinct. Human encroachment, rats, dogs, and loss of habitat contributed to the death of the species.
3. Juan Antonio Llorente was the last man to hold which post, in 1834?


Answer: Secretary of the Spanish Inquisition

The notorious Spanish Inquisition was established in 1478. Queen Isabel II of Spain abolished the Inquisition in 1834.
4. What was the last battle to be held on mainland United States soil?

In late December, 1890, a group of Sioux were forced to relocated to a camp at Wounded Knee Creek, South Dakota. When the US cavalry attempted to confiscate the Indians' weapons, a shot was fired, which culminated in the death of twenty-five cavalrymen and 200 Sioux men, women, and children. Chief Big Foot was the last Indian Chief to die in battle.

This battle marked the end of the Indian Wars.
5. In the year 1582 Pope Gregory XIII declared that the calendars would all switch forward ten days. What was the last Western nation to adopt the Gregorian calendar?

The Julian calendar of the Romans took into account leap days. However, they did not realize that the earth's orbit actually takes an extra 6 hours, 11 minutes, and 14 seconds. By the 16th century, that extra time had knocked the spring equinox off by ten days. Pope Gregory decreed that the calendars all be moved forward, and that century years not be leap years unless they were divisible by 400.

It was not until after the first World War that the last Western nation, Greece, changed over in 1923.
6. In 1936, Rainey Bethea was executed in Kentucky. He was the last American to be what?

Bethea was hanged in 1936 for murder. The sheriff at the time was a woman, and reporters added lurid and untrue details about the execution. The hangman was actually drunk and had to be assisted. This spectacle led to the end to public executions in the United States.

Since the death penalty was reinstated in 1976, three Americans have faced the firing squad and three have been hanged. As of 2010, all capital punishment in the US is by lethal injection, though in some states the prisoner has the option of choosing the electric chair, the gas chamber, the firing squad, or hanging.

John A. Bennett, who was hanged by the US military in 1961 for rape and attempted murder, was the last American to be executed for a crime other than murder.
7. In what decade was the last person guillotined in France?

Torturer and murderer Hamida Djandoubi became the last person to be guillotined in France (or anywhere else) in 1977. France abolished the death penalty in 1981.

Beheading by sword is still an official method of execution in some nations, such as Saudi Arabia.
8. On February 6, 1989, Chris Gueffroy became the last person to do what?


Answer: Be fatally shot trying to cross the Berlin Wall

Gueffroy was fatally shot ten times trying to cross into West Berlin. His companion, Christian Gaudian, was also shot, but survived. In March of that year, Winfried Freudenberg died when his improvised balloon aircraft crashed during an escape attempt. He was the last person to die while attempting to cross. In November of 1989 the border between East and West Berlin was opened.
9. In 2008 Franz Künstler died. Künstler was the last known veteran of the Central Powers forces in World War I. Which country did he fight for?

At the age of nine weeks, Dean was the youngest survivor, and the youngest passenger on board the ship. Her parents were from London and planned to move to Kansas. Dean's brother and mother also survived, but her father drowned. The family later returned to England.
Source: Author Czolgolz 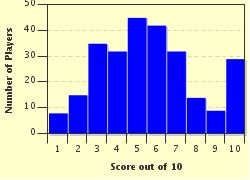 
Other Destinations
Explore Other Quizzes by Czolgolz