Alcoholic drinks, a subject close to my heart!

Quiz Answer Key and Fun Facts
1. Baileys Irish Cream, a world famous famous blend of Cream and Irish Whiskey but in what year was it first produced?

The brand was launched on 26th November 1974 having cost $40,000 to bring to production. The Milk from 40,000 cows is used to supply the Cream used in the production of Baileys in Ireland.
2. Which is the oldest licensed Whiskey distillery in the world?

Bushills was granted a License to Distill by King James the 1st on the 20th of April 1608.
3. The Guinness Brewery in Dublin has been in operation since 1759 - how long is the lease on the St. James' Gate property?

The lease, originally signed by Arthur Guinness in December 1759, was for 9000 years. It is, however, no longer the largest Guinness brewery in the world - a title now held by the Guinness brewery in Nigeria.
4. What proportion of Mexico's annual Tequila production is the Jose Cuervo brand?

Jose Cuervo Tequila is old, with over 200 years of history as Mexico's oldest continuously running tequila distiller. Jose Maria Guadalupe Cuervo received a permit in 1795 allowing him to manufacture mezcal wine.
5. Captain Morgan Rum is named after Sir Henry Morgan, which country did he originate from?

Sir Henry Morgan was a Welsh pirate who became infamous in the Caribbean in the 1600s. The drink that bears his name was only introduced to the world in 1944.
6. Vodka is favoured by fictional spy James Bond and many brands have been used in the film series - which brand was seen in the most recent "Casino Royale" film?

All these brands have been featured in the film series at various times thanks to product placement deals. Although the novels don't specify a brand it is thought that Stolichnaya was the intended drink of choice at the time.
7. Which animal is to be found on Bacardi Rum labels?

In the rafters of the original still building lived fruit bats thus giving the brand an unusual logo for the label.
8. Which is "Probably the best beer in the world" according to its advertising?

Carlsberg's slogan "Probably the best beer in the world" was introduced in 1973 for the UK market.
9. Called 'The Queen of the Hebrides' this Island is renowned for producing some of the most distinctive Scottish Single Malt Whiskies.

Though you may find it remarkable that an island only 25 miles long can support seven distilleries, at one time the island boasted twenty one distilleries.
10. Originally distilled by medieval Monks in Italy for therapeutic purposes, this berry is used for Gin production worldwide.

Growing wild on the hillsides in Italy, they realised their therapeutic value as soon as they were distilled.
Source: Author Step_7 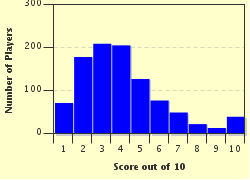 Related Quizzes
1. Sipping and Sailing in the Mediterranean Average
2. World Cups Average
3. Spirits of the World Average
4. What's In That Liqueur? Average
5. Liqueur Average
6. Potent Potables Easier
7. I Drink, Therefore I Am Average
8. Raisin of Destiny Easier
9. Drinks Tough
10. Down the Hatch Average
11. Goldilocks and the Free Beers Average
12. Drinking All Over The World Tough


Other Destinations
Explore Other Quizzes by Step_7