Spirits of the World Trivia Quiz

How well do you know your spirits?

Quiz Answer Key and Fun Facts
1. To be called a "Scotch", whisky must, of course, be made in Scotland. Which of the following is one other requirement of a Scotch?


Answer: It must be aged for at least three years and a day

Scotch is the only spirit in the world that must meet legal requirements. The Scotch Whisky Order of 1990 (UK) dictates the strength, ingredients, aging time, geography, and purity of Scotch whisky. While a Scotch must always be made in Scotland, there are many good imitations to be found in other countries. Japan, for example, is famous for its own whisky industry, which has been purposely modelled on Scottish production methods. Brands like Yamazaki, which go so far as to import real Scottish peat for their single-malt whiskies, are world-renowned in their own right. And in Canada, the Glen Breton brand of single-malt whisky has raised the ire of Scottish distilleries, who worried that the "Glen" in the name would make some buyers think it was a real single-malt Scotch.
2. "Proof" is a standard to judge alcoholic content in a spirit. For example, if a spirit was "100 proof", what would its alcoholic percentage be? (US usage)

"Proof" originated as a way for people to make sure they were not being ripped off when buying home-distilled spirits. "100 proof" was generally the standard people looked for - 50% alcohol - to ensure there was no watering down of their drink. After the end of Prohibition in the U.S., spirits were purposely watered-down - to 40% - to make them less powerful. That is the general standard today.

However, you can still buy full-strength spirits such as whisky today if you look. They are called "cask strength" and are usually more expensive.
3. What American spirit is made from aging corn whiskey in charred casks?

Bourbon is really just an American style of whiskey, which uses a unique casking method to add flavor. If the whiskey is then filtered through charcoal, it becomes Tennessee Whiskey, of which Jack Daniels is the most popular brand. In fact "Jack" is the best-selling whiskey in the world.

By the way, I spell "whiskey" differently here, because only in Scotland, Canada and Japan is whisky spelled without the "e".
4. Tequila is a spirit made in Mexico. From what cactus-like plant is Tequila made?

"Blue agave" is what you will see as the ingredient on a tequila bottle. It is similar to an aloe vera plant, with a pineapple-like fruit at its base. It is cooked and fermented into a sort of beer called pulque. It is said that pulque was the drink of the ancient Aztecs.

The pulque is then distilled to make mezcal and tequila. Mezcal is similar to tequila, but a less-refined, more "raw" version. You might say it is to tequila what moonshine is to whiskey. Also, despite what some believe, the presence of a worm in the bottom of a tequila bottle does not indicate "authenticity".

This practice was the idea of an American importer of Mezcal, not Tequila, who added a worm to the bottle as a gimmick to sell more product. So eat that gross thing if you want, but it is in no way a "tradition" in Mexico or anywhere else.
5. This spirit is made from many ingredients, but usually potatoes. After fermentation and distillation, it is filtered repeatedly to achieve a nearly colorless, tasteless, odorless drink. What is it?

Vodka is usually associated with Russia, but is actually made in many countries in Eastern Europe and Scandinavia. It became popular in America first among businessmen, who liked the fact that it had no smell on the breath, allowing people to "have a few" at lunch, and then return to work without the tell-tale odor. To this day, much of Vodka's appeal lies in this "discreet" benefit. One brand - "Silent Sam" - has even named itself after this reputation. Now, since Vodka can be made from nearly anything and does not require aging, the notion of "quality", when dealing with vodka, is a bit subjective. So, while you may enjoy your Grey Goose in its handsome bottle, it is no "better" than many of the cheaper brands.
6. The Japanese spirit shochu is actually a distilled form of what other drink?

Shochu is made from distilling rice-wine, or sake, to make a colorless spirit with a slightly bitter taste, much like Vodka. It is similar to the Chinese spirit "shaojiu" and the Korean spirit "soju", as even the names imply. And did you know that sake, although it is commonly called "rice wine," is technically a type of beer? That's because the rice must first be malted (ie. the hard, dry rice kernels must be soaked in warm water to allow the starches to be converted to sugar) in the same way as barley must be for making Western-style beers.

However, given the final product's color, taste and lack of carbonation, it is unlikely that the average person will ever call sake "rice beer".
7. Beefeater and Bombay Sapphire are two brands of what spirit?

Gin is made from flavoring grain spirit with Juniper berries. You could think of it as a sort of flavored vodka. Gin became notorious in the 18th century as the scourge of the poor classes in England. This arose because poor-quality grain, which was unfit for making beer, was made into gin at a price that the poorest Briton could afford. Gin became, for a while, the "crack cocaine" of its time, blamed for awful crimes, the destruction of families, and the decline of British society in general.

Although it is also popular in Holland, it remains to this day a drink indelibly linked to English culture.
8. This drink, popular in France in the 19th century, was legendary for its potent strength and characteristic green color. What was it?

Absinthe was the "green fairy," the favorite of artists and other Bohemians of Paris. Made from wormwood, absinthe in those days contained trace amounts of Thujone, a psychoactive drug, and social conservatives banned it as "dangerous." However, its Thujone content was minimal and the powerful effect it induced was probably only the result of its high alcohol content - often 75%! Today it has been allowed back on the shelves, but in a much reduced 40% ABV., and an unnecessarily-high price for some reason...
9. Single Malt Scotch is, by definition, of superior quality to Blended Scotch.

"Single malt" has nothing to do with quality. It simply means that a bottle of Scotch contains whisky from only one distillery - hence, it is made from a "single malt," and not many different malts. Since blended Scotches, such as Johnny Walker, are made from blending single malts together, they are inherently in no way "inferior" to single malts. Why do single malts often cost more? There are a few reasons. One is certainly snob factor. Clever marketing, much of it by Glenfiddich, has made the term "single malt" synonymous with "quality". Also, many single malts are rarer, meaning that the whisky in them comes from a small or long-aged batch.

This makes them of some collectible value. However, once again, there are some (not many) blended scotches that are also rare and old and hence of comparable price to single malts - see Johnnie Walker Blue.
10. This spirit is made from distilling wine and then aging it in oak barrels. During the aging process, water vapor is lost and fungus feeds on the alcohol, producing a stronger, wine-like spirit. Two famous varieties of this spirit are Cognac and Armagnac. 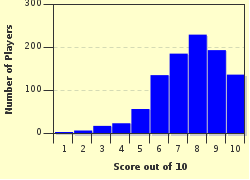 
Other Destinations
Explore Other Quizzes by panderson