Liqueur is technically a sweetened (and flavoured) Liquor - the origins of some of them are quite interesting, to say the least.

Quiz Answer Key and Fun Facts
1. This liqueur was invented in 1797; it soon gained popularity amongst the fairer sex. It was also one of the first liqueurs to be advertised. However its manufacture was always shrouded in controversy due to one of its ingredients, wormwood to be precise. It was subsequently banned in many countries. Which 'Green Fairy' am I talking about?

Absinthe (invented by Dr. Pierre Ordinaire) was called the 'La fee verte' because of its colour. It gained instant notoriety because of the 'Absinthe murder' (One Mr. Lanfray, supposedly after having two shots of Absinthe, become so intoxicated and killed his wife). It was banned in the U.S of A in 1912 and this ban was followed by many other countries.
2. The liqueur gets its name from a Jamaican 'Aunt Maria'. It is the one of the most popular coffee liqueurs in the world. What is this liqueur known as?

According to legend, a young girl was separated from her family during the colonial wars. Her maid Maria managed to save some of her possessions, one of which was a small treasure box which contained the secret recipe of the liqueur.
3. This liqueur was similar to the 'Green Fairy' liqueur but it didn't have the wormwood. Picasso's painting 'The Glass and the Bottle' featured this liqueur's bottle in cubist mode. Which liqueur am I referring to?

Pernod was created by Henri Louis Pernod. Initially it contained wormwood (so it is technically absinthe then) which was later removed because of wormwood's depressant properties.
4. This liqueur has been a rich history. Created in 1880, it is one of the most popular liqueurs of all time. Escoffier used it as an ingredient for his culinary masterpiece Crepe Suzette. Cesar Ritz was so impressed with this liqueur that he was among the first to introduce it at his hotels. It is mostly drunk as an after-dinner drink or is used as an ingredient for premium cocktails. Which Cognac based liqueur am I talking about?

Grand Mariner was created by Alexandre Marnier-Lapostolle. Escoffier created the dish in honour of then Prince of Wales (and future King) Edward VII.
5. The liqueur with a unique heritage; this liqueur, made by monks, has seen through many a rough period including an attempt by Napoleon to manufacture the liqueur himself. It was also the preferred drink of the nobility (even the Tsar Nicholas II was said to be an addict of this liqueur). Which herb based drink am I talking about?

Chartreuse, initially manufactured as a medicine, is now sold in two major varieties - Green and Yellow. Napoleon tried to seize the recipe by claiming it for the 'Secret Recipes Commission'. However the recipe was found to be too complicated for the latter and was endorsed 'refused'. Chartreuse is one of the very few products in which the CEO of the company has no knowledge of the ingredients, the manufacturing process and has no control over the work force!
6. This liqueur (now generic) was made popular because of its presence in a cocktail called 'Kir' and 'Kir Royale'. The most famous brand of these liqueurs is made by the house of Legay -Legoute. Which crčme liqueur is being mentioned here?

Crčme de Cassis is a blackcurrant flavored liqueur. The 'Kir' cocktail was named after Canon Felix Kir, priest/mayor/French resistance fighter from Dijon.
7. The quest for an herbal medicine led Dr. J.G.B Siegert (an army surgeon) to Venezuela, enrolled under Simon Bolivar. He ended up creating one of the world's leading aromatic bitters, a must-have in all bars. Which bitter is this?

Contrary to popular belief, Angostura bitters get its name from a town in Venezuela and not from the Angostura bark. Incidentally there is no Angostura bark in the recipe.
8. One of the relatively new liqueurs, this Japanese product was launched in the U.S.A at Studio 54 (NY). It was associated with the movie 'Saturday Night Fever'. Which green liqueur is this?

Midori is manufactured by the Suntory group and it was launched in U.S.A in 1978. It has featured in many official cocktails of prestigious events like the 1984 Olympics, various IBA (International Bartenders Association) meets etc.
9. This liqueur has a rich and colourful history - it was the personal 'eau de vie' of Bonnie Prince Charles, who gave it to one John MacKinnon to thank the latter for the support he gave to the Prince in his war against George I (Jacobite Rebellion). The first bottles of this exquisite Liqueur went into sale in 1908 and weathered many an immediate storm including the then Prime Minister Lloyd George's move to increase tax on whisky products. What is the name of this 'drink that satisfies'?

Drambuie gets its name from the Gaelic 'An Dram Buidheach' or 'the drink that satisfies'. It is generally referred underneath a Drambuie advertisement - 'prepared from a recipe of the " '45".
The '45 refers to the fact that Bonnie Charles (who had the initial recipe) came to Scotland (from Italy) in 1745. Drambuie is basically whisky and heather honey. It was in 1914 that the Drambuie Liqueur Company was formed (before that it was sold by W. Macbeth & sons).
10. Time for one more Monk's liqueur! This liqueur toasts to the good and great God. This liqueur was made during the Renaissance by a Venetian monk (using 27 herbs) - it gained instant popularity amongst the French nobility. However during the French revolution and its aftermath, the recipe was thought to have been lost forever. It was, by chance, that Alexandre Le Grand, found the recipe book in the Fecamp library in 1863. There has been no looking back since. Which liqueur has this unique heritage?

The book containing the recipe was by a Benedictine monk in 1791 however he was oblivious to its contents. You will find the sign "DOM" in every Benedictine bottle - what this means is "Deo Optimo Maximo" or "to God, Most Good, Most Great".
Warning: Drinking of alcohol may be injurious to health but studying or reading its history is NOT.
Source: Author ace_sodium 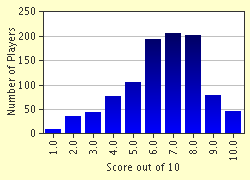