Drinking All Over The World Trivia Quiz

I like to enjoy a good drink and I like to travel, so I am going to ask some questions about where I've been and what I've been drinking. See how much you know about "Drinking All Over The World".

Quiz Answer Key and Fun Facts
1. I'm sitting at a bar beside Lady Bird Lake in "The Live Music Capital of the World", I have just drunk a Lone Star beer, now I intend to try a Ziegenbock Amber. In which US state capital am I?

Austin, on the banks of the Colorado river is the capital city of the U.S. state of Texas. Lady Bird Lake named after the ex-first lady, is one of three man made lakes within the city boundaries. Lone Star is one of the state's bestselling beers and Ziegenbock Amber brewed by Anheuser-Busch is sold pretty much exclusively in Texas.
2. Yesterday I visited Hawke's Bay one of this country's oldest and best wine producing areas, today I have been offered a tour of the Lion Nathan and DB Breweries, the two biggest brewers in the country, then tomorrow I'm going to see arguably the nation's most famous tourist destination: Milford Sound. Which country am I in?

There are over seventy wineries located across Hawke's Bay on the east coast of New Zealand's North Island. Combined, Lion Nathan and DB Breweries, control around 89% of the country's beer sales by volume. Milford Sound is a fjord on South Island, so picturesque Rudyard Kipling claimed it to be the eighth Wonder of the World.
3. In which South American country would I be holidaying if I were on a regular diet of Feijoada and several bottles of the locally brewed Antarctica and Brahma beer?

Feijoada, a stew of beef and pork with beans, is considered to be the Brazilian national dish, although its origins stem from the colonial Portuguese. The brewers of Antarctica and Brahma beer were for years market rivals, until they merged in 1999 to become Ambev. Ambev is based in Sao Paulo, the largest city in Brazil.
4. With a main brewery headquarters based in Strasbourg, which product, a 5.5% pale beer with the epithet 1664, has a 40% market share and is the leading brand of premium lager sold in France?

The Kronenbourg Brewery was founded by Master Brewer Geronimus Hatt in 1664. This is where the company's leading brand Kronenbourg 1664 takes its name. Today the outfit is owned by Carlsberg, the world's fourth largest brewery group. Stella Artois, Grolsch and Tuborg are beers of Belgian, Dutch and Danish origin respectively.
5. I'm relaxing on San Pedro Beach in Ambergris Caye drinking Belikin, a tasty local beer. I've been eating some great food including garnache, tamales and my favourite, bile up. In which Central American country am I?

Belikin, made by the Belize Brewing Company, is the leading domestically produced beer in the country, and is also now being exported to the USA. The brand name is of Mayan origin and means "road leading east". Belize has a diverse populace and the cuisine is varied, colourful and imaginative.
6. I'm in the West Indies, on the easternmost island in an area of the country's capital city known as St Michaels, enjoying the locally brewed Banks beer. I have also visited the distillery of Mount Gay rum, supposedly the oldest existing brand of rum in the world. In which city am I?

Bridgetown is the capital and largest city of the island nation Barbados. The settlement was established by English settlers back in 1628. Banks beer came into being in the early 1960's, and is exported across the Caribbean, USA, Canada and Sweden. Mount Gay distilleries is now owned by Remy Cointreau, it's many varieties of rum are sold to over sixty different countries.
7. Saint John, New Brunswick Canada is where I am. I'm slugging back a couple bottles of Moosehead beer. What is Moosehead Breweries' main claim to fame?

Founded in 1867, Moosehead Breweries is Canada's oldest independent brewer. Moosehead Lager, Moosehead Light, Clancy's Amber Ale and Cracked Canoe are just a selection of fine beers that bears the Moosehead insignia "Union Made" on their labels.
8. I'm relaxing at a restaurant on the shores of Lake Balaton, the largest lake in Central Europe, sipping a Sopron beer. I've just ordered goulash and I'm undecided whether to drink a glass of local red wine known as Bull's Blood, or wait until dessert and have a glass of Tokaji. Which country am I in?

Lake Balaton is southwest of the Hungarian capital Budapest, its surface area is close to 600 square kilometres. Sopron beer is a tasty refreshing local lager, Bull's Blood is the nation's favoured red wine, and Tokaji is a sweet white wine that is notable enough to earn a mention in Hungary's national anthem.
9. I have just had a dinner of Souvlaki and Greek salad in a taverna in Athens washed down with an ice cold Mythos beer. For dessert I shall have Baklava, followed by a glass of Greece's leading blended brandy. What is this brandy called?

Metaxa is a Greek distilled spirit, a blend of brandy and muscat wine that comes in five differing varieties. The more stars on the bottle the longer it has had to mature. Famously, Metaxa has come to be known as the first alcoholic drink consumed in space. Ouzo and Pernod are anise-flavored liqueurs, while Slivovitz is a plum brandy from the Balkans.
10. Eating tom yam kung in the ancient city of Sukhothai, I can't decide which indigenous beer to drink: Chang, Singha, Leo, or Archa, or maybe I should go native and drink a Sang Som and soda? In which Asian country am I?

Tom yam kung, is a spicy shrimp soup enjoyed by Thai locals and tourists alike. Chang, Singha, Leo, and Archa are all inexpensive beers brewed by either ThaiBev or Boon Rawd Brewery. Sang Som, a rum that tastes more like whisky, is the leading spirit brand in Thailand with over 70% of the market share. More than 70 million litres are sold each year in Thailand alone.
Source: Author nickdrew55 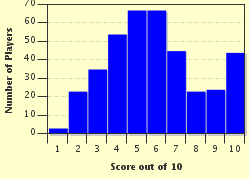 Related Quizzes
1. Raisin of Destiny Easier
2. Potent Potables Easier
3. Goldilocks and the Free Beers Average
4. World Cups Average
5. Sipping and Sailing in the Mediterranean Average
6. Spirits of the World Average
7. What's In That Liqueur? Average
8. I Drink, Therefore I Am Average
9. Liqueur Average
10. Zymurgy: An Alcoholic Science Average
11. Down the Hatch Average
12. How To Read a Wine Label Tough