With the exception of water more tea is consumed in the world than any other beverage. Green tea is a significant component of this consumption. How much do you know about the Japanese style of this refreshing drink?

Quiz Answer Key and Fun Facts
1. The rejuvenating properties of green tea were first discovered in which country?

China claims to have first used green tea more than 5000 years ago. There are many versions of how the discovery was first made but one widely accepted version relates the story of how a Chinese scholar was boiling water for his evening meal when some leaves of a tea plant fell into the water as he was replenishing the fire. On tasting the water he found the drink so refreshing he further refined the process and passed the knowledge on to subsequent generations.

The tradition of tea drinking became established over the years and it is thought the practice was first introduced to Japan by Buddhist monks in the eighth century.

Here it was first used as a medicine in upper class social circles and when the art of the tea ceremony was introduced in the 1500s the custom of tea drinking was introduced to the common people.
2. To which of these common ornamental plant groups is tea most closely related?

The tea plant belongs to the Theaceae family and is closely related to the ornamental Camellias species like sasanqua, reticulata and japonica. It is a native of south west China and thrives in high rainfall semi tropical regions. The plant is a shrub or small tree in its natural state but is kept about 1m high under cultivation for ease of management.

There are two main types of tea plant. The one used for producing most green teas, Camellia sinensis sinensis is smaller and slower growing than the one used for black tea, Camellia sinensis assamica. Unlike black tea, which grows all year round, green tea is grown in a cooler climate where it is subjected to a distinct dormant period before producing the all important first flush in spring. China and Japan produce about 65% and 20% per cent of the world crop of green tea respectively.
3. The fermentation process is an essential part of the production of green tea.

The Japanese use the former method while the Chinese favour pan frying. Because the chlorophyll is not broken down by the enzyme the tea retains its green colour hence the name. Black tea naturally contains a higher level of tannins and flavanols and is therefore fermented, but it still tastes bitter compared to green tea.
4. What is the average productive life of a green tea plant?

Cultivated tea plants reach their maximum production level after about 4-5 years and then have a productive life of about 30-40 years. They are usually harvested about 4 to 5 times per season and then in autumn are given a heavy pruning to cut them back in preparation for the first flush the following spring. Every 5 years they are given a severe pruning back to bare wood to rejuvenate the plant and produce new branches.

After 40 or so years of this treatment the accumulation of dead wood and associated diseases makes them uneconomic to harvest so they are ripped out and replanted with newer varieties. I have heard of plants up to 120 years old still being harvested but this would not be normal practice.
5. The majority of Japanese green tea plantations are produced by clonal propagation (cuttings).

Once the technique of clonal propagation had been established virtually all the tea gardens in Japan are propagated this way. The superior traits of selected varieties are perpetuated by this method and these are uniform across any particular block. Propagation by seedlings results in a lot of variation between individual plants because they are open pollinated. Traditionally most black tea plantations are propagated by seedlings. The ideal time for taking cuttings is mid summer using transitional wood between the green tip and the older stem. Two node cuttings are usually sufficient and they are grown on in specially prepared shaded nursery beds in the field or in a shadehouse using a suitable cutting medium.

They are sufficiently developed to plant out in the field 9 to 10 months after striking but some harder to strike varieties may need up to 20 months so they are planted out the following year. Clonally propagated plants can be produced by tissue culture but for most traditional farmers this is not an economic option.
6. Green tea is usually harvested three to four times per season. In Japan, which harvest produces the highest quality product and is the most economically valuable to the grower?

The first harvest is usually ready in late spring and is the most valuable producing the highest quality tea which is worth about 60% of the value of the crop for the year. The reason for the high quality of the first flush is related to the high nitrogen level in the leaves which translates to higher levels of amino acids.

This level declines with each subsequent flush. The amount of caffeine (2-3%) tends to increase as the season progresses giving an increasing bitter taste to the tea. The factors determining the timing of each harvest relate to the leaves having maximum amino acid levels and minimum fibre content.

These levels are at their optimum in the top two to three leaves of the shoot.
7. Green tea plantations in Japan today are pruned and harvested mechanically.

Specialised machinery has been developed to do the tasks formerly done by hand such as pruning and harvesting. Tea bushes are planted in rows about 1.8m apart and are pruned like low hedges so that as the new shoots emerge they can be easily harvested by machinery. Harvesters can be two person units with a curved blade which shapes the hedgerow and blows the cut leaves into a large bag that is dragged across the top of the bushes or larger units that straddle the rows and are driven by tracks. The rows of neatly trimmed plants make a pleasing site across the rural landscape of Japan.

The plants are dormant during the winter months and are harvested as they actively grow during the late spring and summer months.
8. To achieve the best quality 'Sencha' (high grade) tea freshly harvested leaf is delivered to the processing factory one to two hours after harvest. Once there it is processed using which of these three basic procedures?

The first task after harvesting is to halt the fermentation process and this is achieved by subjecting the leaves to steam for one to two minutes. These days there is specialised processing equipment designed to simulate what used to be done by hand. After steaming there are two drying processes which gradually reduce the moisture content of the leaf by a combination of hot air blowing through the leaves while they are continuously stirred by these mechanical arms.

This twists and dries the leaves.

In between these drying cycles there is a rolling procedure which breaks the cells in the leaves creating a flexible uniform moisture level throughout the leaves. A final rolling procedure over a heated plate after the second drying creates the all important needle shape and releases the fragrance which is a feature of the final product.

The total processing time is about three to four hours. The resulting tea from this process has about 6% moisture and is known as 'Aracha' or crude tea which when further refined is the basic product tea masters use for blending when creating their different tea styles.
9. The popularity of green tea in the west is growing as people discover the refreshing taste and health benefits that have been long known in the East. Which of the following is NOT a recognised health benefit of green tea?

There are no credible weight loss claims that have been claimed for the consumption of green tea. A lot of the health claims are a result of the high levels of antioxidants which neutralise the free radicals in the body that are believed to be one of the prime causes of cancer.

These antioxidants are contained in catechins which are preserved along with flavonoids when the fermentation process is stopped by steaming.
10. To prepare an ideal cup of Japanese style green tea (Sencha) you should place a measured amount of tea in a pot, add boiled water, allow to draw for five minutes, then serve, adding milk and sugar to taste.

Nooooo! The only thing right with this procedure is the measured amount of tea which should be two to three grams per person. Never use boiling water or adulterate your 'sencha' with milk and sugar. This latter practice was adopted by the English to disguise the bitter taste of black tea which is a result of the fermentation process. To achieve the true taste experience of a good cup of 'sencha' the aim is to have the correct balance of astringency, bitterness, and sweetness. Use a proper pot which has a sieve container to hold the leaves and has sufficient volume to allow the leaves to unroll to their original shape and release their flavours and compounds. Water should be about 70C (2/3 boiling water and 1/3 cold water) and after pouring through the leaves into the pot allow it to draw for between 90 and 120 seconds. Pour into each cup evenly a little at a time till the very last drop in the pot. Four to five cups a day is the recommended level to experience the health benefits of this wonderful beverage.
Happy drinking! Kampai!
Source: Author mstanaway 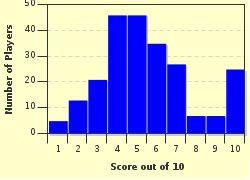 Related Quizzes
1. Please Pass the Sugar Easier
2. Herbal Tea...A Gift from Mother Nature Easier
3. Teas Around The World Average
4. Ten Tan Tin Teas Average
5. It's Five O'Clock Average
6. What's Brewing in the Teapot? Average
7. So You Want to Be a Magical Tea Average
8. A Storm in a Teacup Average
9. Polly Put the Kettle on Average
10. Sit Down and Enjoy a Cup of Herbal Tea! Average
11. Tea: A Global Refreshment Average
12. Drink It Up! Average


Other Destinations
Explore Other Quizzes by mstanaway