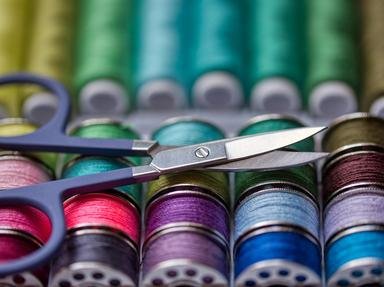 Come into my haberdashery store to find out more about these fascinating sewing and needlework essentials, old and new.

Quiz Answer Key and Fun Facts
1. What is the name given to the thin and sometimes intricately carved wooden spools used in lace-making?

What was believed to be ancient lace hair-nets were found in the tombs of Thebes, dating back to 2500 BC. Fast forward a few hundred years to the 16th century when lace making really took off in Europe, with the aristocratic houses of France and Italy using the designs in their apparel and upholstery.

Small metal pins are placed onto a lace pillow, with some of the designs handed down through the centuries. Cotton thread is wound around long, thin, wooden holders called bobbins, and these are weaved through the pins, creating lacework which is both intricate and delicate.
2. American Samuel Briskman was credited with inventing what sewing accessory in 1931?

Silk merchant Samuel Briskman (1873-1967) formed the American Pinking Shears Corporation in 1931 and patented pinking shears. On his 1967 obituary in the "New York Times", it said, " Mr. Briskman's invention, which he patented in the early nineteen-thirties, proved to be a revolutionary cost saving device in the textile business.

The scissors with a serrated edge, cut a zig-zag course across the material which prevented its ravelling". No-one is sure why they were called pinking shears, although it is believed to be named after the flower pinks (dianthus), as the petals have a serrated edge.
3. I was trying to explain this unusual rounded-shaped object to a fun guy on I met my sewing course. What is it?

Which of us has a fond memory of our mother, or grandmother, sitting in front of a fire and darning the holes in our socks? Out came her sewing basket with needle, ball of wool and darning mushroom at the ready. The wooden mushroom would be placed inside the sock and the wool pulled taut to make it easier to sew and mend.

Some people called them eggs, and it was not only socks they would be used for darning, but bedding linen and clothing as well. It is a dying practice as people nowadays throw away their holey socks and buy new.
4. Which of these is NOT a type of sewing needle?

A grommet is a ring, usually made from metal, which is punched into fabric to make a hole. An example would be a hole in a shoe, plimsoll or trainer, where the laces tie through. A bodkin is a large needle, usually with one end blunt and the other with a large eye to feed through heavy thread, ribbon or tape.

A tatting needle is long and thin, as thread is wound around it several times to create beautiful shapes for decorative edges added to lacework or collars. Betweens is another name for a needle used for hand quilting.

The needle is thick and short, but stable enough to pierce through (between) multiple layers of fabric.
5. What was the name given to an ornate silver chain worn around a housekeeper's or seamstress's waist, often with sewing accessories attached?

A chatelaine was the name of the lady in charge of a large house who was responsible for general housekeeping. She would walk around the house wearing a belt with a chain attached with keys, purse and other small possessions needed for her work. Chatelaines date back to Roman times but became more popular during the 18th and 19th centuries. Nurses also wore chatelaines and these would include small medical devices.

More ornate versions with encrusted jewels were used by wealthy women to hold their perfume bottle, purse and note-book, or just as an adornment. Seamstress used chatelaines to hold sewing accessories, including pincushions, needle-cases, tape measures, pencils and small scissors.
6. As the predecessor to the embroidery hoop, which sewing frame accessory was used primarily during the 18th century, as shown in this image of Madame de Pompadour?

Tambour frames were used to create tambour work, a delicate type of embroidery which uses a fine hook and not a needle. The fabric is drawn taut against the tambour frame, making it easy for the sewer to punch the fabric with hook, using one hand above the material and the other hand below to draw the thread through.

The daisy stitch was commonly used and very tiny beads would be added as an embellishment.
7. Many people know them as mannequins, but what is the correct name for the three-dimensional dummy that is used in dressmaking?

A dress form is termed as "replica of a human form made of cloth, padded and mounted on a metal or wooden base that is used for draping and fitting garments". A crude dress form made from wood was discovered in the tomb of Tutankhamun, with the exact measurements of the King himself, making us believe they were first used during this period.

They have since been used in dressmaking for many centuries, aiding the seamstress in getting the measurements exact to the actual body size. Pins used to hold material pieces together can accidentally pierce through the dress form, but this is better than using a real life model.
8. An etui is the name given to a small ornamental case used to hold sewing supplies. True or false?

Portable sewing cases have always been useful in case urgent repairs need to be made to clothing. Imagine sitting down and the trouser seam on your backside suddenly rips open! An etui case would hold emergency sewing accessories, including needle, thread and a small pair of scissors.

Some etuis would be small enough to attach to a chatelaine chain around the waist. Vintage etui cases would be made from silver, wood or ivory, whereas modern versions are made from leather, fabric or plastic.
9. In the anatomy of the sewing machine, which of these is the name of an attachment used to keep the material flat while you are sewing?

Sewing machines have many other parts which are named after the human anatomy. These include face plate, thumb screw, foot pedal and sewing head. The presser foot is a type of attachment which keeps the material flat while it feeds through the needle and thread.

This is helped underneath the material by small metal teeth called feed dogs which move backwards and forwards on the needle plate as the machine is sewing. There are many types of presser feet and these have different functions. These include the basic universal, sewing buttonholes, sewing on zippers, hems and topstitching, patchwork, quilting and embroidery presser feet. All of these are interchangeable for the brand of machine you have.
10. My needlework box contains many items including buttons, ribbons, braiding, zippers, pins, seam rippers, and all sorts of fripperies and bibelots. Collectively these are known as what in the sewing world?

All the small accessories used in needlework are known collectively as notions. These can also include cutting tools, pincushions, safety pins, needles, beads, tailor's chalk and thread. Anything that serves as a small sewing tool, accessory or embellishment can fall under this general term. Haberdashery shops or craft stores supply a wealth of notions, or alternatively, spend a rainy evening indoors browsing online as you finish darning those socks that need mending.
Source: Author Plodd 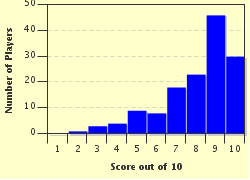