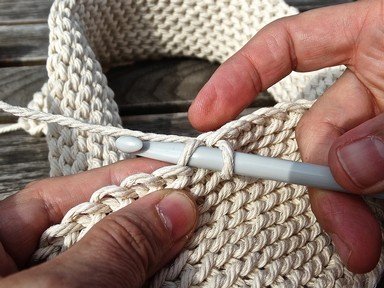 If I'm not playing or authoring on Fun Trivia these days, there is a good chance that I am crocheting. Contrary to popular belief, the craft isn't just for little old ladies anymore. Let's see what you know about the art of crochet.

Quiz Answer Key and Fun Facts
1. The art of crochet originated in which of the following ancient civilizations?

No one known exactly where the art of crochet originated, but there are some theories regarding its beginning. Some believe that it began in Arabia and the idea was spread along trade routes. Others think that crochet might have its origin in South America, with a tribe that crocheted items that were used in rites of passage. A third theory is that the art originated with doll-making in China. There is no concrete evidence, however, that answers the questions regarding when and where crochet began. The earliest date of its use as cited by the Crochet Guild of America is the 1800s in Europe.

Many historians believe that men were the first people to use crochet for items such as fishing nets and animal traps. Today? Well, the "Skye" is the limit! It is relatively simply to find patterns for all sorts of items on the internet - even some for a little girl who loves Skye from the show "Paw Patrol". Also on the tree you may notice some crocheted snow flakes used as Christmas ornaments.
2. There are some people who believe that crocheting may be related to a type of handicraft found in the Near East where a material is stretched across a frame which is used as a base for the craft. What is the name for this type of crochet?

The name tambouring, from the French for "drum", is used for both the frame and the craft work that is done on it. Originating in North Africa, Turkey, India, and Persia, tambouring was unknown in Europe until the 1700s. A piece of material was stretched on the frame, and a very small hooked needle was used to make loops and draw the very fine thread through the fabric. As you can see from the picture, many of the stitches in tambouring resemble a chain stitch, the beginning stitch used in most crochet work today. At some point in the late 1700s, the frame and background materials were no longer used, and tambouring became known as "crochet in the air".

One can easily find several portraits of fashionable ladies sitting at their tambour doing needlework. It was a popular hobby for wealthy ladies in the 1700s.
3. Irregardless of the origin of the craft, the word "crochet" is from French. What does it mean?

The word "crochet" originated with the Old Norse "krókr", which became the French "croche" in the mid-1900s. It means "hook" (some sources say "small hook"), which is a reference to the tool that is used to form the stitches. Crochet hooks can be made of a variety of materials, including bamboo, wood, or aluminum. The size of the hook used is one of the factors that is directly related to the size of the stitches that are made.

What do you think? Some crochet patterns produce items that look quite a bit like the real thing. My cactus garden never needs water, but it provides a touch of color on the window sill.
4. The terms used in the making of crochet handiwork are universal.

Crochet terms are not universal, and this, of course, it what makes it difficult for crocheters to pick up just any pattern and take off with it. According to the Crochet Guild of America, crochet is the term used in France, Italy, Belgium, and Spain, but in other countries it is known by different names. For example, in Holland it is known as haken, and in Sweden it is called virkning. Not only that, but the needles are sized differently from area to area, and the stitches have different names, which can be really confusing. What is known as a single crochet stitch in the United States is known as a double crochet in the UK; both stitches are made the same way. To make it even more difficult, in the U.S. there is also a stitch known as a double crochet, but its UK equivalent that is made the same way is called a treble stitch.

Amigurumi is a portmanteau word, from the Japanese words "ami", meaning "crocheted or knitted", and "nuigurumi", which means "stuffed doll". While some sources state that the craft MAY have originated in China with the making of dolls, some state that amigurumi originated with Japan's samurai, perhaps as early as the 12th century. They used handmade garments and decorated their swords with crochet, and, by the early 17th century, also had learned how to knit.

Every piece of the featured Spiderman began with a magic ring that became a spiral using single crochet or double crochet stitches and increasing or decreasing on the appropriate round. The incorrect choices are all types of Japanese textile crafts.
6. For those that do not crochet or knit, it may be difficult to tell a difference between the two. What is NOT a typical difference between crocheting and knitting?


Answer: The type of yarn that can be used

While the very finest crochet thread that is used for making doilies, lace, and the like, would not be very suitable for knitting, it is agreed that both use the same type of yarn. Crocheting typically uses one tool, while knitting uses two that are about twice as long as the one used in crochet. When knitting, a row of stitches are kept active on the needle as each row is being made; in crochet, with few exceptions, each stitch is made one at a time. Knitters usually use two stitches - knit and purl - while crocheters use single crochet, half double crochet, double crochet, triple crochet, slip stitches, and chain stitches. According to one source, there are 20 basic crochet stitches.

Opinions vary as to which is easier - knitting or crocheting - but crafters agree that creating and completing projects is very satisfying. Some studies have even found that these activities can create a calming effect and reduce stress.
7. During which era in history did making Irish lace become a popular cottage industry?

This is quite an interesting story. During the Great Irish Famine (1845-1852), also called the Irish Potato Famine, families supplemented their farming income with handmade crocheted items, a project to which all family members contributed. They would crochet whenever the situation allowed, making beautiful cuffs, collars, and lace. Crocheting was taught in schools, and crocheting cooperatives were formed to share techniques and patterns. Anyone who crochets knows that there is an ever-present problem with keeping the item clean. That was no problem! Crochet work could be easily cleaned!

It is believed that Queen Victoria favored Irish Crochet - many pictures feature her wearing some sort of lacy looking embellishment on her clothes - and that her endorsement helped to sell Irish-made items throughout the UK. It has also been speculated that many Irish were able to emigrate to America at that time by financing their trips with profits made from crocheting.
8. Queen Victoria crocheted scarves for soldiers.

Believe it or not, this is absolutely true! Queen Victoria was an avid crocheter, so much so that some people credit her with crocheting scarves for British soldiers who were serving in South Africa during the Second Boer War; the scarf was part of an award that was called "The Queen's Scarf". Described as a muffler, each scarf was five feet long and was to be worn as a sash over the shoulder and fastened at the hip. Some people felt that receiving an award that was personally made by the Queen was at least as prestigious as receiving the Victoria Cross. In 1902, however, the British Secretary of War, declined to make that distinction. To date, 1358 Victoria Crosses have been awarded, as opposed to just eight scarves that were made by the Queen herself.

Pictures of the scarves exist, but were not available to use on this site. They appear to be tan or orange (its hard to tell due to age) in color, made with the UK treble stitch, and decorated with fringe. Although the soldier in the picture does not appear to be one who received The Queen's Scarf, the scarf would have been worn in much the same way the soldier is wearing his ammo belt in the picture. Recipients of the award were nominated by the men in their unit and approved by their commanding officer.
9. Today it is easy to find crochet materials in ready-to-use packages like skeins. In the past, however, yarn was commonly wound in an oval shape and twisted. What was this type of yarn package called?

I have seen lots of old pictures that show someone holding a hank of yarn up in the air wrapped around two hands, while another person carefully unwound it and rolled it into a ball. You can see on the left where the beginning and ending strings were tied together, but crocheting without making the ball first would cause a lot of tangling and knotting, and perhaps waste some of the precious yarn.

When beginning a crochet project, it is important to carefully choose the correct yarn. A thicker yarn will produce a thicker, heavier item, while a thinner yarn will produce a finer, light-weight item.
10. The art of crocheting has seen a resurgence in popularity in the past twenty years. This renewed interest has given way to a new pastime called yarn bombing. Which of the following words best describes yarn bombing?

Also called yarn storming and wool bombing, items used in the hobby can be either crocheted or knitted. Yarn bombing is said to have developed as a way for crafters to use up leftover yarn or repurpose unfinished projects. Instead of using paint or chalk, items - either in nature, as in the picture, or man made - are decorated with pieces made of yarn. The first yarn bombing has been attributed to creative Texans, however, it did not take long for the idea to spread around the world. In fact, clubs have even formed, like the Craft Club Yarnbombers in Essex, England.

Why do people do this? There is a variety of reasons, including decoration and advertisement, but some do call it vandalism. The clubs do face opposition from people who think that the handmade items have a negative effect on the environment. The displays become damaged in the weather and must be taken down in a timely fashion. A yarn bombing of the Dos de Mayo in Madrid, Spain, is pictured.
Source: Author ponycargirl