The key to Great British desserts is... Quiz

Most desserts have one or two absolutely essential ingredients to make them ooey-gooey heavenly delights. British desserts are no different.

Quiz Answer Key and Fun Facts
1. Sherry trifle is a Christmas-time favourite in Britain. A key ingredient for a good trifle is a low density, egg-based, digit-shaped sponge biscuit which can be soaked in sherry and suspended in fruit-flavoured jelly under layers of custard and cream. What do many British people call this key ingredient?

Officially, ladyfingers are called "Savoiardi". They are unleavened biscuits which are also used in other great desserts, including Tiramisu.
2. The Knickerbocker Glory is a British favourite with both children and adults alike. Its key ingredient is a dairy-based, frozen treat usually served in a cone. What is this key ingredient?

Ice cream has been around for hundreds of years. It is thought that people of the Persian Empire made it by pouring fruit juice over fresh snow. However, it has become a dairy based product in more modern time.

A Knickerbocker Glory is an ice cream sundae featuring layers of fruit, ice cream, syrup, cream and nuts. it is usually served in a tall glass with a long spoon to reach to the bottom.
3. Arctic Roll is a British dessert which features a roll of vanilla ice cream covered in sponge cake. A sauce made from what key ingredient is spread between the ice cream and the cake?

The original Arctic roll, introduced in the United Kingdom in the 1950s, featured raspberry jam between the ice cream and the sponge. Chocolate versions are also widely available in Britain, using chocolate ice cream, chocolate sponge cake and/or chocolate sauce.
4. Bakewell Tart is a British dessert which consists of a shortcrust pastry case, filled with a layer of jam and a sponge-like filling called "frangipane", which is made using which key ingredient?

Frangipane is usually made from butter, sugar, eggs and ground almonds. It originated in France, but it became an essential British ingredient when the Bakewell Pudding, which originated in the town of Bakewell in the Derbyshire Dales, was slowly turned into a tart.
5. A Battenberg Cake may sound German, but it is a British creation! What key ingredient, made using almond meal, covers yellow and pink pieces of cake, laid out in a checkerboard design and held together with apricot jam?

It is thought that the cake already existed but was renamed in 1884 to celebrate the marriage of one of Queen Victoria's granddaughters to Prince Louis of Battenberg.

Marzipan is a popular cake covering in the United Kingdom and is often seen on wedding cakes and Christmas cakes because it can be rolled easily.
6. Spotted Dick is a pudding made in Britain from flour, currants or raisins and what key ingredient, which is actually raw beef or mutton fat?

Suet is often used in British desserts to provide fat content. It has a high smoking point, which allows it to be used in desserts which must be cooked at a high heat without burning them. Many British people use it in pastry making as well as steamed puddings.

Spotted Dick is usually steamed. A flat sheet of pastry which has been made using suet is layered with cried fruit and then rolled up onto a cylinder and steamed.
7. A Cranachan is a Scottish dessert, which is usually a mixture of whipped cream, honey, raspberries and with toasted oats. What is the key, boozy, ingredient which makes this British dessert special?

Not only is whisky added to the mixture of cream, honey, fruit and oats, but the oats themselves are usually soaked in whisky overnight. Because of its alcoholic nature, it is tradition to bring each ingredient to the table to allow each person to concoct their own version, according to taste.
8. A Gypsy Tart is usually made using brown sugar, pastry and which other key ingredient that might also be known as "unsweetened, dehydrated cow produce"?

60% of the water within milk is removed to create evaporated milk. Because a high heat is required for this, the milk has a caramel-like taste which is popular with children. Gypsy tarts are, therefore, very sweet.
9. Eccles Cakes (also known as "Squashed Fly Cakes") are small, round cakes made with flaky pastry, butter, sugar and what other key, dried, ingredient?

Eccles Cakes aren't cakes. They are actually pastry buns, filled with dried fruit and covered in sugar. They are named for the town of Eccles near Manchester, England.

Currants are a staple in British desserts, featuring in Christmas cakes, mince pies, fruit slices and spotted dick, to name just a few.
10. The key ingredients in Harry Potter's favourite British dessert are shortcrust pastry, golden syrup, breadcrumbs and lemon juice. What is this British classic?

Treacle tart is usually served warm with ice cream or cream, though custard can also be used as an accompaniment. It became more well know outside of the United Kingdom following the popularity of the "Harry Potter" series of books, in which the title character's favourite dessert was stated to be Treacle Tart.
Source: Author suzidunc 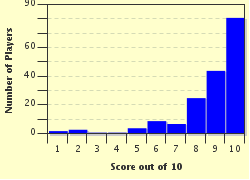