Enjoy a stroll through the virtual museum of Team Kaffeeklatsch to visit some of our favorite paintings with stories to tell. The collection was compiled for the Amazing Trivia Race 2.

Quiz Answer Key and Fun Facts
1. "Girl with a Pearl Earring" is the title of a masterpiece by which of the following Dutch painters?

This portrait of a young girl wearing a simple pearl earring is considered a piece de résistance by many fans. The image is of a young female in a turban, looking over her shoulder at the painter. The beautiful painting is done in muted colors and uses the pearl earring in her ear as the focal point of the painting.
2. While you may have seen images of Da Vinci's "Mona Lisa", do you know on what type of substance the painting was created?

Possibly the most famous painting in the world, the "Mona Lisa" or "La Gioconda" is believed to be the portrait of Lisa Gherardini, the wife of a wealthy silk merchant. It is an oil painting done on a poplar wood panel. Da Vinci so loved this painting that it was never actually given to the client who commissioned it, and the artist worked refining it for over a dozen years.
3. "The Slave Ship" (1840) is a stunning painting. Who was its English creator, regarded today as not just a great landscape artist, but as a great historical painter?

Turner (1775-1851) was also an accomplished watercolorist, and produced over 500 oil paintings and 2000 watercolors in his lifetime. "The Slave Ship" has a longer title: "Slavers Throwing Overboard the Dead and Dying - Typhoon Coming On", and it came about after Turner read about the practice of slave ship captains throwing their human cargo overboard in order to collect insurance.

The painting was displayed at an early anti-slavery meeting in London.
4. The Canadian west coast has many native tribes whose spirituality is expressed visually in the form of totem poles, and their beauty and majesty were the subject of many of the paintings of this artist and writer, a true Canadian icon. Who was she?

Emily Carr (1871-1945) not only depicted the aboriginal culture and British Columbia landscape in her art, but she also chronicled life in the province, one of the earliest to do so. She was among the first Canadian artists to paint in the modernist and post-impressionist styles. Although she was never officially a member, Carr was also closely associated with Canada's famous Group of Seven artists.
5. Which Rembrandt painting was stolen from the Isabella Stewart Gardner Museum in Boston in 1990, a theft which was the cause of great mystery?


Answer: The Storm on the Sea of Galilee

The 1633 painting, depicting Christ's calming of the Sea of Galilee from the "Gospel of Mark", was Rembrandt's only seascape. On March 18, 1990, thieves disguised as policemen gained entry to the museum, disabled the security guards, and stole works by Degas, Manet, and Vermeer, along with the Rembrandt.

The loss was estimated at $500 million, the largest private-property theft in history. In 2013 the FBI reported that they had traced the theft to a shadowy gang operating in the Eastern US. However, no arrests or recoveries were made at that time.
6. Grant Wood entered a painting into a competition at the Art Institute of Chicago in 1930, subsequently winning the bronze medal. What was this work of art, that resonated with many as a symbol of the steadfast American spirit?

"American Gothic" is the familiar painting of a severe-looking older farmer and spinster daughter in front of a small white house, with the man holding a pitchfork. With its presentation at the beginning of the Great Depression, the painting struck a chord with viewers who saw it as a struggling farmer refusing to give up in the face of difficulty.

Interestingly, the models for the painting were not farmers, but were Wood's sister and his dentist.
7. English artist Thomas Gainsborough created a pair of oil paintings named "The Blue Boy" and "Pinkie", which depict the twin niece and nephew of Paul Revere.

While these two paintings are often seen together, they are not by the same artist, nor are they of siblings. To top it off, they are not related to Paul Revere either. Gainsborough's "The Blue Boy" was painted around 1770 and is believed to depict Jonathan Buttall (1752-1805), the son of a wealthy English merchant. "Pinkie" was painted by English painter Thomas Lawrence around 1794 and is believed to depict Sarah Barrett Moulton when she was about 11 years old, but this cannot be confirmed. Painted in a similar style, both are full body portraits, one of a young man in a blue silk suit and the other depicting a young lady in a light pink bonnet and dress.
8. Which of the following is a Baroque painter known for his depictions of fleshy women as well as for his extravagant altarpieces and landscapes?

Peter Paul Rubens (1577-1640) was a prolific Flemish painter known for his many depictions of plump nudes. Many of his altarpieces are quite large and somewhat showy in the classic Baroque style. He was a quick painter who was able to paint his entire adult life and who owned a large studio in Antwerp, Belgium. Royalty throughout Europe begged for his work, both for their own collections, as well as for their churches.
9. "I deny the accident," was a quote from which American abstract Impressionist artist, whose "drip" paintings revolutionized the art world?

Pollock (1912-1956) began establishing himself as an artist during the Great Depression during the Federal Arts Project. He came under the patronage of Peggy Guggenheim in 1943, and began experimenting with the use of liquid paint (as opposed to oil paints from a palette).

It was through this experimentation that he developed the drip-painting method, which was used to create his most famous works between 1947 to 1950.
10. In 1961, the Museum of Modern Art in New York discovered that they had been displaying which famous artist's work upside down?

"Le Bateau" ("The Boat") was a paper-cut picture created by Henri Matisse. When the picture is viewed it might not be hard for most people to understand how the museum's mistake happened. Only three colors are used in the piece: it has a white backround with some strips of pinkish-mauve and blue laid flat upon it. The Fauve style is nevertheless apparent in this work of art.
Source: Author shorthumbz 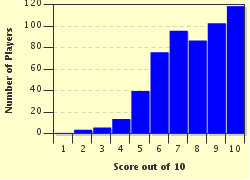