So you think you know your theatre history? Here's a collection of trivia ranging from the Greeks to post WWII theatre. All questions are in chronological order, unless otherwise specified.

Share on Facebook
Share on Twitter
Share by E-Mail
Author
ItalianEyes
Time
6 mins
Type
Multiple Choice
Quiz #
195,623
Updated
Dec 03 21
# Qns
10
Difficulty
Very Difficult
Avg Score
4 / 10
Plays
1196
This quiz has 2 formats: you can play it as a or as shown below.
Scroll down to the bottom for the answer key.

Minoan theatres were located inside or near palaces, almost like ballrooms. In addition to 'dramatic' presentations, they were also used for dances, ceremonies and bull-leaping. If you want to see one preserved, however, you are unfortunately out of luck.
2. Which playwright did Hrosvitha model her plays after?

Hrosvitha (pronounced roze-veeta) used Terence's comedies as models for her plays which include 'Dulcitus', 'Abraham' and 'Callimachus'. Since Terence's works were secular, Hrosvitha, being a canoness at the monastery of Gandersheim, used religious subject matter while keeping the humor.
3. Although James I authorized the King's Players to play at Blackfriars in 1608, they were unable to open until December, 1609. Why?


Answer: An outbreak of the plague

During this time period, all public theatres had been shut down in England. The only dramatic performances took place in private theatres that were owned and operated with the king's authorization. Blackfriars was one such theatre, and was built in 1596.
4. Which of these is NOT a form of 'commedia dell'arte'?

Commedia dell'arte was a form of theatre extremely popular in its native land of Italy. Basically an improv with stock characters, it had many forms including 'commedia all'improviso', a totally improvised version of performances and 'commedia asoggetto', a performance that developed onstage from preconceived plots or themes. 'Commedia erudite' was the amature version, literally a learned comedy; the amateur actors would devise their own copies of professional scenarios and characters. Sabbattini was a lighting designer of the time period who published 'Manual for Constructing Theatrical Scenes and Machines' in 1638
5. Around 1660, scenic properties differed little in England, France and Italy. Which of these was NOT a standard unit at that time?

Roll drops are background scenes that, as the name suggests, roll down to reveal a scene for the actors to act in front of. The device was not really used frequently until after 1690.
6. The Prussian monarch Frederick the Great supported what kind of lavish productions?

Frederick, who ruled from 1740-1786, was a huge fan of opera and staged amazingly detailed productions. Also extremely fond of French theatrical forms, he hired French acting troupes to perform in his private theatre.
7. What was Lucia Vestris' most important work as?


Answer: Manager at the Olympic Theatre

Lucia Vestris was an excellent and important manager for many reasons including the fact that she paid close attention to all details of a production and integrated them into one organized concept. Born Lucia Elizabetta Bartolozzi, she lived from 1797-1856.
8. Adolphe Montigny was famous for being the first to treat this aspect of theatre as an art form. What was this aspect?

One of Montigny's many innovations as a director was to position the actors simply. Instead of having them stand in odd places near the front of the stage he utilized furniture and would have the actors sit on and walk around set pieces. Also, he began directing his actors to speak to each other instead of aim their lines at the audience.
9. All right, a question about Soviet Theatre. During WWII, what was Russian theatre devoted primarily to?

Shows were devoted to showcasing Russian playwrights, foreign authors were rarely, if ever, performed. Russian traditions were the forefront subject of the plays performed, and all the works were edited and censored to uphold strict Communist views.
10. In Chinese opera, the 'wu-sheng' is a character noted for acrobatics. What kind of character is he?

The Beijing Opera is simply amazing, a visual feast. The stage is basically bare in order to put more focus on the actors who are all playing 'type' roles. Lavishly costumed and wearing layers of character make-up, the types of characters are the men, women, painted face and comic. Each type has a subcatagory as well, for example, the men include young men, old men and military.
Source: Author ItalianEyes

This quiz was reviewed by FunTrivia editor agony before going online.
Any errors found in FunTrivia content are routinely corrected through our feedback system.
Most Recent Scores
Jan 18 2023 : Guest 83: 0/10
Dec 09 2022 : Guest 108: 1/10 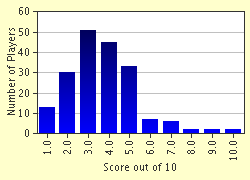 
Other Destinations
Explore Other Quizzes by ItalianEyes