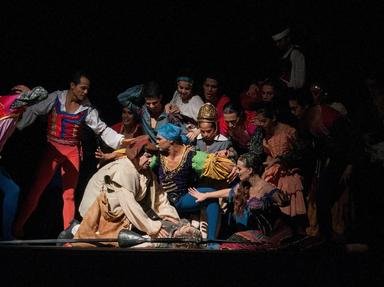 Oh, What a Night! Trivia Quiz

The audience has gone. The lights are off. I sit alone backstage and recall how such a wee germ of an idea turned into such a extravaganza of excitement and drudgery, smiles and frowns, work and fun....

Quiz Answer Key and Fun Facts
1. When I think back to that day, I can see us sitting in the café booth discussing the seemingly simple decision to put on a musical show at our high school. Though the show had already been selected by the school, what was one of the first items that needed to be checked off the list?

This is actually a huge step when planning a performance. There are restrictions on some shows about how many performances can be in a single area, or restrictions if a road company will be performing the same show near to you. By securing the performance rights for your time frame, you lock in the show.

In addition to the performance rights, some shows also incur licensing fees. There are shows in the public domain where the only cost is to pay for programs. If not using one of those, there are a number of companies that license the rights of the script and libretto or score. Some of these companies have shows categorized by age, by vocal ability, by the number and gender of actors, etc.
2. Next we had to set up the budget. Remember working through all the numbers that weekend? Though thinking out and listing all of the items was challenging, once we got back to basics the result was simpler than we had imagined. What basic equation helped us calculate the final budget?

I'm not trying to oversimplify here. This really is a major factor in any production. Income may come from donated funds, fund raising, ad sales in the program, and ticket sales to name a few. Expenses could be publicity, performance rights, rentals of equipment or facility, costumes, props, sets, program and ticket printing, makeup, etc.

Many a small production can turn a profit, if a budget is planned and maintained.
3. I don't think I'd want to relive trying to get folk to volunteer for the production team. Who knew it needed so many folk? The director has to be responsible for the stage production, and the producer has to be responsible for all non-stage jobs such as publicity, tickets, etc. The director was a significant help selecting some of the other team members, but what title did he use for the person selected to be his "right hand"?

Besides the producer and director, there can be musical director, choreographer, set designer, costume designer, lighting designer and/or manager, sound designer and/or manager, crew, property, etc. One person can take on several of these tasks, but each has its own requirements and priorities. All of these jobs are important to the production and must be taken seriously by all volunteers.

The stage manager is traditionally the director's right hand. He/she works with all of the others to ensure a smoothly run performance. In addition, the stage manager is often the one to prompt if a performer loses their spot.
4. There is one particular item that I'm glad we thought of well in advance. We used various avenues to promote our efforts, letting people know that we were fund raising, auditioning, and selling tickets for the performance. Though designed by the students, the posters that we created worked to great effect for which aspect?

Publicity is an important facet to inform everyone that you can reach about what you're planning. Without publicity there would be no one attending your auditions, or your performances. In this example, posters are created to be displayed in local shops. Newspapers are a great way to advertise also, both pre- and post-performance. Don't forget to give a reviewer a pair of tickets!
5. Whew! Was I glad that we had a panel of folk to help with this task. So many aspects to the decisions that I didn't anticipate! What part of this project is held to audition those that will be on stage?

Auditions can actually include crew as well, depending on the production. If you're only auditioning for cast, some points to keep in mind might be: height, voice, singing voice, acting ability, and stage presence.

From the other side of the fence, those auditioning are likely to be excited and very nervous. This may be their first audition. Be polite, firm and patient--ok, hard to be perfect, but try to keep in mind that this experience could help them blossom in more ways than simply talent on a stage.
6. During our budgeting process, we found there wasn't enough money to pay for the costumes or costume material. However, it turned out that we actually helped engender some team spirit by involving the cast and crew. What effort did they participate in?

Depending on whether or not there are funds, and how large they are, at the beginning of the project, fund raising can be used not only to generate needed monies, but also to help pull together the whole group by planning and implementing a fund raising project. This can be used then to pay for costumes, props, ticket printing, or any number of other necessities.
7. During the show there are a couple of items that are needed during the scenes that seem to keep getting lost. Where's the book we need for scene one? Who's got the flowers for the second act? What is the title for the person most likely to be responsible for managing these items?

This can be a very important aspect of your show. The actors/actresses showing up without their props can make the scene confusing to the audience. Props on the wrong side of the stage can cause delays during the performance. A prop master is generally in charge of acquiring all the appropriate props, ensuring that they are where needed during rehearsals and performance, and collecting and storing them after each use.
8. Rehearsals were scheduled throughout the pre-production time, including one I didn't at first appreciate, but found to be essential. The initial rehearsals were for learning lines and songs, blocking scenes, etc. Then we had dress rehearsals scheduled for everyone in costume. One of those dress rehearsals was scheduled to get the lights and sound in sync with the production. What type of rehearsal is this generally called?

This should not be skipped even for smaller productions. If the lighting is not set correctly, the actors won't be seen properly. If there are sound effects, e.g., thunder, that don't occur on cue, the audience will be left wondering what's going on. Hopefully, during your tech rehearsal all the things that can break will, and the show will go off without a hitch.
9. All of those details and more have contributed to the performance tonight. The director has given his speech to cast and crew and the curtain is about to go up for the first time. Oh, what a night! And what's more, I hear that it's an SRO performance. What exactly does that mean?

From my experience, there's little to compare to the nerves and anticipation of opening night, regardless of whether you're cast, crew or production. It is traditional that the director give a speech to thank everyone for all of their efforts and to provide just a boost of extra confidence before the performance begins.
10. As I look back, there was so much more to the whole endeavor than I originally anticipated. These will remain some of my fondest memories, and more, this has definitely fueled my ambitions to try again! But for now, I need to shake off this retrospective mood, and get dressed for an opening night tradition for theatre performances. Where am I headed?

Cast parties are a tradition to celebrate with performers and crew. These can be held after opening night performance, or once the run is complete. It's an opportunity for all to bask in the performance aura.
Source: Author mlcmlc 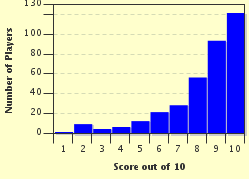 Related Quizzes
This quiz is part of series A Few in Humanities #1:

Some of my quizzes in the 'Humanities' category

Referenced Topics
People   Humanities   Theatre   By The Numbers   Names   Initials   Geography Test: Where am I?   Theatres