Let's see how much you know about the subfield of Sociolinguistics.

Quiz Answer Key and Fun Facts
1. Sociolinguistics is most appropriately defined as which of these?

Sociolinguistics is the scientific study of language use in society. Popular areas of study include dialects or dialectology; bilingualism and multilingualism; and language and gender.
2. The linguistic term "code-switching" refers to which of the following?


Answer: A speaker's use of more than one language, dialect or register in an utterance or interaction

Code-switching is an area of study within sociolinguistics that has become more prominent with the advent of mass globalization. Code-switching is common among populations that speak two or more languages. However, code-switching does not necessarily mean using multiple languages within an utterance or conversation, it can also entail using two or more dialects and/or registers.
3. A person who speaks three languages fluently is most properly referred to by which of these terms?


Answer: The study of the sounds in spoken language

The study of the interaction between sounds in spoken language is referred to as phonology, which is itself a proper subset of linguistics. Phonetics refers to the sounds present in spoken language. While both are important to sociolinguistic scholarship, neither is central to the subject. Sociolinguistics is mostly concerned with the study of why language is used in a particular manner, or why it has changed from a previous accepted norm to the current norm.
5. Which of the following is NOT a dialect of English?

Despite the misleading name, Pennsylvania Dutch is a dialect of German, or more properly Low German (Plattdeutsch). The "Dutch" part comes from the mis-application of the English prounciation of "Deutsch" (German) into American English orthography as "Dutch". However, Dutch is a separate, but closely related language, spoken in The Netherlands (or Holland) and parts of Belgium.

RP or "BBC" English is the standardized version of English spoken in the UK. Gullah (sometimes referred to as Geechie or Gullah/Geechie) is a dialect of English spoken on the Sea Islands of South Carolina and Georgia. (Some might consider Gullah/Geechie to be a creole language rather than a dialect, with significant arguments to support such a claim.) Boston Brahmin is a dialect spoken by a small group of upper-class Bostonians.
6. Which of the following languages was not widely spread as a result of colonialism?

While all political powers have at one time or another spread their language through exploration, the best answer is Swedish. The French, English and Spanish spread their languages to far corners of the world during the period of European colonization (circa 1500-1900).
7. While the United States has no official language, the de facto language of government is English. Of the following, which is the closest to the number of languages spoken as a native language (mother tongue) by natural-born citizens of the United States?

There are over 300 separate languages spoken by natural-born citizens of the United States. Many are familiar, such as Spanish, Italian and German. However, the US has rather large pockets of Chinese, Korean, Japanese, Arabic, Vietnamese, Taglog etc. speakers.

The number is driven higher by the number of indigenous languages still spoken, such as the Athabascan languages (i.e. the Inuit languages in Alaska), and other languages such as Cherokee and Navajo.
8. English is most closely related to which of the following languages?

However it is not the closest relative of English. Standard German of today is based on Old High German (OHG).

The "high" refers to altitude, not latitude (or even prestige, although coincidentally the prestigious connotation of "high" is appropriate for sociolinguistic considerations). Contemporary German therefore stems from the dialects of the southern part of Germany (i.e. around Bavaria, or the highlands), while low German (Plattdeutsch), along the same argument, stems from the lowlands, or the northern areas of Germany.

The dialects of the north separated into Dutch, Frisian and English as Teutonic tribes migrated westward. Frisian is the bridge of sorts between English and Low German/Dutch speakers. German diverged as a standard language based on OHG's relatively distant proximity to the the North Sea (and Martin Luther's choice to translate the Bible from Latin into a High German dialect), and therefore German diverged from Dutch, Frisian and English. Dutch is therefore the closest non-endangered language relative of English, followed somewhat distantly by German. Danish, Swedish, Norwegian and Icelandic are the other major surviving Germanic languages. French, a Romance language, is closely related to Italian, Spanish, Portuguese, Romanian and the nearly extinct Romansch language spoken in Switzerland.
9. To what does the term "lingua franca" refer?

A "lingua franca" is a mutually understood language between two or more groups who do not share a native language. The term originates from Roman Empire era Europe when Latin was the language of religion, scholarship and international (or inter-societal) relations. During the Roman Empire, most of Europe north of Rome was considered Frankish (or Franconian), hence "lingua franca" literally means Frankish language, most likely referring to some point in a dialectal continuum between Roman Latin and various other dialects of Latin (dialects that have diverged into the Romance languages such as Romanian, Italian, French, Spanish and Portuguese). Latin, therefore, was a lingua franca, but only among a small portion of society beyond Rome, namely Roman Catholic monks and other converts of high social status.

A pidgin language is a language used almost exclusively for economic purposes between two or more groups of people who do not share a common language (such as a lingua franca). Pidgins lack the syntactic complexity of a natural language or a creole language, and instead are heavily focused on nouns and the most basic verbs. Adjectives, adverbs and other more nuanced elements of natural languages are generally sparse or non-existent.
Source: Author innate13 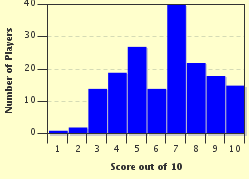 
Other Destinations
Explore Other Quizzes by innate13