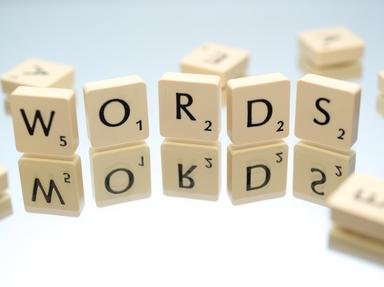 Ten very unusual words used in the Crystal Ball game for you to puzzle over. Some of the questions may just contain clues for you. Have fun.

Quiz Answer Key and Fun Facts
1. Hi sweety, have you got the time to define bagassosis?

Congratulations to player baldricksmum of the No Worries team who guessed this peculiar word correctly on 8 January, 2019. So impressive. Bagassosis is a lung disease defined in Wikipedia as "a type of hypersensitivity pneumonitis" which is caused by mouldy sugarcane fibre. Another word to describe mouldy sugarcane fibre is bagasses, so you can see how the word evolved. Symptoms of this illness are difficulty in breathing, fever and coughing up blood.

The condition first made its way into the medical world in 1955 in a factory manufacturing cardboard in Kolkata, India. Why the connection to sugarcane? India is a country that produces large amounts of sugarcane. Instead of throwing away the waste fibre of the cane when making molasses, it was utilised then, and still is today, in the manufacture of paper, cardboard and rayon.
2. How about karyoplasm - can you pick its definition?

This word was won by ClarkyB of The Moops team on 8 January, 2019. Karyoplasm is a rarely used medical term describing nucleoplasm. It is a type of protoplasm found in the nucleus of a cell. Surrounded by a nuclear membrane, karyoplasm aka nucleoplasm contains chromosomes and nucleolus. (I'm trying to look intelligent here).

Another medical encyclopaedia on the net informs one that it is "nuclear sap, the protoplasm of a cell nucleus, separated from the surrounding cytoplasm by the nuclear membrane, or karyomembrane". That definition comes from the Great Soviet Encyclopedia, 3rd Edition (1970-1979). Did you all understand that? Was that a "Nyet, nyet" from the back of the room?
3. Another medical doozy for you. Do you know the meaning of orchidalgia?


Answer: Pain in the testes

Snapcracker of the Retired and loving it team guessed this word correctly on 7 January, 2019. If you're familiar with Latin or Greek roots and prefixes and suffixes, then you'll know that any word ending in "algia" has a meaning related to pain. "Orchis" on the other hand comes down to us from the Latin language and basically describes the male testes. Put them together and you are describing pain in that part of the male anatomy. This very painful condition has various causes, such as injury, infection, cancer or even as the result of surgery.

Apparently the word orchis, as far as describing male anatomy, sprang into use because of the resemblance of the roots of that bloom to the male reproductive anatomy. From this arose the belief in ancient days that orchids had powerful aphrodisiac qualities. The plant's root was dissolved in goat's milk and enthusiastically consumed by ye ancient gentlemen. One drink of this concoction, according to the folklore of the time, and a man could perform the labour of love seventy times in a row. Quite possibly, ye ancient ladies of the time had a lot of fun scoffing at that.
4. And another one to sink your teeth into. What is the meaning of lobscuse?

Guessed correctly by mazza47 of The Cat People team on 11 January, 2019, lobscuse, also known as lobscouse or just plain scouse, was a stew first eaten by northern European sailors back in the early days of sail. In fact, this dish has as many other names as its ingredients. It was also referred to as lobscourse, lobscouse, labskaus, lobby, lob's course and lap's course, depending in which part of the world it was dished up.

While the origin of the original word is unknown, ingredients could include salted beef or mutton, neck of lamb, onions, flour, water, salt, crackers (also known as ship's biscuits), assorted vegetables on hand including potatoes and carrots, and even picked beetroot or red cabbage. It's just a plain old stew in other words and still very popular today as a lunchtime meal at various pubs in England, particularly those in Liverpool, where many claim the dish itself originated.
5. Now, stop shouting, will you! Can you give me the definition of hyperpiesia?


Answer: Persistent high blood pressure with no cause

Hyperpiesia is defined as ongoing high blood pressure - for which no known trigger can be found. In many cases the root cause of "normal" high blood pressure can be established, such as a high powered business person with huge demands and deadlines to be met - but hyperpiesia has the medical world somewhat puzzled because its root cause doesn't appear to exist. Nobody guessed this difficult word which appeared in the Crystal Ball game on 21 January, 2019. This is not at all surprising but don't let it it send your blood pressure soaring through the roof.

For future reference, if you're interested, any word beginning with "Hyper" has an essential meaning that means high, while "Hypo" is associated with low. An easy way to remember this is "Po means low".
6. Wipe away your tears now. What is the definition of a catafalque?


Answer: A raised decorative bier for a coffin

Won by Looking4IQ of the United States of Trivia team on 24 January, 2019, a catafalque is a raised decorative bier for a casket during a funeral or memorial service, but not for your everyday person in the street. It's used more in services for Popes, high up dignitaries, noblemen, very famous people and the like, and seen but rarely these days. There's something almost medieval about its use, in fact. Pope John XXIII (1881-1963), for example, had his casket supported by a catafalque as he lay in state at St Peter's Basilica while a million mourners filed past to say their final farewells. One was first used in the United States for the funeral of President Lincoln, and since then has been used for other memorial services of worthy American dignitaries in the Capitol Rotunda.

The remains of the famous French writer and philosopher, Voltaire (1694-1778), were carried on a catafalque to that country's secular mausoleum, the Pantheon, thirteen years after his death, in a long procession through Paris. Because of his stinging criticism of religion while alive, he had been denied a Christian burial upon his death, but his friends had buried him secretly, and due honour was only accorded this famous man at that later time with due ceremony. Another example can be found in Australia, where a catafalque guard is often to be seen at the Australian War Museum to honour our fallen defence personnel during ANZAC Day ceremonies. These are also carried out in various other sites in Australia and around the world where our soldiers fell. Very moving ceremonies, these are held just as the sun begins to rise, while the Last Post plays hauntingly over the heads of the silent crowds.
7. Do you know the meaning of a Kameez?


Answer: An outfit worn in various Asian and Islamic countries

Won once more by Looking 4IQ of the United States of Trivia on March 18, 2019, a Kameez is a traditional outfit worn by various cultures on the Indian subcontinent and in Islamic countries. It is a type of seamless shirt cut carefully from the one piece of material so that no cloth goes to waste.

Its use dates back over many centuries, particularly so to Egypt, where it is referred to in Arabic as a Qamis. Worn by both men and women today, this outfit can either be plain and unadorned or brightened up with various embellishments.
8. Can you describe the form of entertainment known as bocce?

Won by namrewsna from the Wisdom of the Fool team on 19 March, 2019, bocce is an Italian game somewhat similar to the sport of lawn bowls. Also known as bocci or boccie, this ball game has been around (pardon the pun) since the days of the Roman Empire.

It is very popular still in Italy today and in any country to which Italian people have emigrated. Like any other game, bocce has assorted rules to follow for the successful completion of any game, but the major part of the fun associated with bocce, if you've ever been lucky enough to attend an Italian function where the game is part of the day's entertainment, is the sheer joy and exuberance of the players and audience present. You'll go home with a huge smile on your face, a full belly (those Italians most definitely know how to cook) and some very happy memories.
9. Sit up straight please, and give me the definition of lycee.


Answer: A type of high school for students

Won by baldricksmum of the No Worries team on 20 March, 2019, a lycee is a midway school between that of primary or elementary - and college or university - depending in which country you reside. In Australia, for example, a lycee school is our equivalent of a high school.

These schools cater to students approximately aged between twelve to eighteen, or, if you live in France where the word originated, for grades from nine to twelve. In that country, attending pupils are either lyceen (boy) or lyceenne (girl).

By the final two years of study at a lycee, or at a High School in Australia, students have a reasonable idea as to which university course they wish to undertake when they graduate, or whether to complete their education when they finish year twelve.
10. An unusual word to wave you off goodbye. Can you define a marlinspike?


Answer: A tool for marine ropework

Guessed successfully by varnish of The Palmetto Players team on 20 March, 2019, a marlinspike looks a little like a giant needle, and indeed, sailors who are classed as masters in the marine field, are very adept at knots (and there's a lot of them to be learned), splicing - and sewing.

These mariners are often referred to as marlinspike seamen. The tool itself is used to split thick strands of rope, twist or untwist other ropes and cables, loosen overly tight knots, and to tighten up rope tension when hand strength alone is not enough.

A marlinspike can range in size from six inches to two feet long, so, in a rather alarming thought, it can also be used as a weapon against any hostile party attempting to take over a ship. Those villains could really be "stitched up" with a marlinspike.
Source: Author Creedy

Related Quizzes
This quiz is part of series Commission #56: