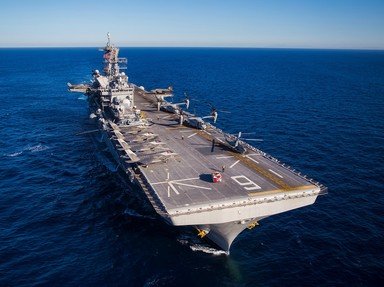 The Soldiers Go Marching One By One Quiz

Left, Right, Left, Right, Halt!! All right, maggot, this quiz will test your knowledge on various military schools across the United States. Now, drop and give me ten ... answers that is!

Quiz Answer Key and Fun Facts
1. The United States Military Academy is one of the most recognized military schools in the country. In which state is it located?

The United States Naval Academy was established in Annapolis, Maryland in 1845. Its motto is "Ex Scientia Tridens" which means "From Knowledge, Seapower" in Latin. Some notable alumni of the United States Naval Academy include former President Jimmy Carter, astronaut Alan Shepard (the first American in space) and former NBA superstar David Robinson.

The photograph shows an aerial view of the city of Annapolis, which is the capital of Maryland. The Maryland State House can be seen in the center of the photo with the Naval Academy in the upper left corner of the photograph.
3. What is the name of this military college, which is located in the state of South Carolina?

The castle-like structure in the photograph is the Padgett Thomas Barracks, which features a red and white checkerboard courtyard. The motto of The Citadel is "Duty, Honor, Respect".
4. Each of these locations was involved with the American Revolution. Which of them is currently home to a prestigious military academy?

Valley Forge, Pennsylvania was a significant location during the American Revolution. In December 1777, George Washington and his troops established a camp at Valley Forge where they had to struggle through a very difficult winter. In 1928, the Valley Forge Military Academy and College was established.

It accepts cadets from Grade 7 up to the junior college level. Their motto is "Courage, Honor, Conquer". Some notable alumni of the Valley Forge Military Academy include author J.D. Salinger, General Norman Schwarzkopf Jr. and NFL wide receiver Larry Fitzgerald.
5. This building is located at the United States Air Force Academy in Colorado Springs. What is it used for?

"Integrity First, Service Before Self, and Excellence in All We Do" is the motto of the United States Air Force Academy. The academy was established in 1954 and is located near the city of Colorado Springs, Colorado. Its iconic Cadet Chapel was completed in 1962.

It is a multi-denomination chapel that provides religious services for the cadets. At first, there was some controversy with the design of the chapel, but it has since become a national landmark. Captain Chelsey "Sully" Sullenberger, the pilot who became famous for landing U.S. Airways 1549 in the Hudson River graduated from the academy in 1973. Several NASA astronauts were graduates of the Air Force Academy as well.
6. This building is known as the National War College. It is part of which military school located in Washington, D.C.?

The National Defense University was established in 1976. It is comprised of several colleges such as the National War College, the Dwight D. Eisenhower School for National Security and Resource Strategy and the College of Information and Cyberspace. The University is primarily located within the grounds of Fort Lesley J. McNair at the southern tip of Washington, D.C.

It is primarily a graduate level institution geared towards providing members of the military and government a means to obtain a higher education.

The building in the photograph is known as Roosevelt Hall, home of the National War College.
7. Less than an hour drive from Washington, D.C. is Marine Corps University in Virginia. It is located in a city that is also home to the FBI Academy. Which is it?

The DEA (Drug Enforcement Administration) also has an academy located at Quantico. The photograph provides a hint as the answer can be seen on the tail of the aircraft.
8. Many public and private schools in the United States have programs that provide military training to students. This program is identified by what four initials?

ROTC stands for Reserve Officers' Training Corps. ROTC is a military program found in public and private schools across the United States. It is offered to both high school (JROTC) and college level students. The ROTC program was established in 1862 after the United States passed a law that required colleges that received a land grant from the government to establish an ROTC program. Students in ROTC programs will often gain an advantage in their pursuit of education. Students can receive scholarships, receive free room and board and even receive an allowance for books and supplies when enrolled in the program.

The historic photograph shows an ROTC regiment from Oregon State University engaged in a training exercise.
9. In which city would you be able to find the New Mexico Military Institute? Perhaps America's future 'Space Force' soldiers will be trained there.

The New Mexico Military Institute, located in the city of Roswell, was established in 1891. It enrolls students from the high school level up to junior college level. In 2018, the United States government proposed the creation of the United States Space Force.

The city of Roswell, New Mexico became infamous after a UFO allegedly crashed there in 1947, which some people believe the government is covering up. Some notable alumni from the New Mexico Military Institute include actor Owen Wilson, NFL Hall-of-Famer Roger Staubach and former news anchor Sam Donaldson.

The school motto of The New Mexico Military Institute is "Duty, Honor and Achievement".
10. The ship in the photograph is known as the Eagle. It belongs to a military academy based in Connecticut. Which is it?

The United States Coast Guard Academy was established in 1876. It is located in the city of New London, Connecticut. The school's motto is "Scientiae Cedit Mare", which is Latin for "The Sea Yields to Knowledge". The ship in the photograph is known as the USCGC Eagle.

Related Quizzes
This quiz is part of series Commission #56: